The Amazing Race wraps up its 31st season tonight on CBS. The competition has been whittled down to four teams, each of whom are vying for the grand prize of $1 million. But who are the remaining teams? And how good are each of their chances as they head into the final challenge?

The remaining teams are: Tyler & Korey, Christie & Colin, Leo & Jamal, and Nicole & Victor. The latter team previously competed on Big Brother, with Nicole winning Big Brother 18 in 2016. They’ve managed to hold their own so far, placing second during four different legs this season. The other three teams have appeared on previous seasons of The Amazing Race.

There Are 4 Teams Heading Into Tonight’s Season Finale

And then there were four… Tune in tomorrow night at 9/8c to watch these teams go head-to-head on the #AmazingRace. Who are you rooting for?

Phil Keoghan, the series host, recently sat down with Gold Derby to discuss the finale. He admits that he was hesitant to fill the entire cast with past Survivor and Big Brother competitors, but that it turned out to be for the best. “I was a little skeptical about it, to be honest with you, in the beginning because I’ve always had a preference for races that have people that have never been on the show before,” Keoghan admitted.

“And we do have a big portion of our fans who prefer that approach with Race,” he continued. “They like racers who have never been on the show. But you’re never going to make everybody happy. You’re never going to get a total consensus.” Keoghan went on to say that he was pleased to see past Race contestants grow from their past mistakes and make a genuine run for the grand prize.

The Winner Will Receive a Grand Prize of $1 Million

“It does go to show you that people do change. And who would’ve guessed that Colin yelling ‘My ox is broken!’ would ever be the guy talking about centering himself and being in the moment and being present,” he pointed out. “I mean, not in a million years did I see that transformation! But it works for them and they’ve been consistent racers from the beginning, and having kids and working on their relationship has gotten them to a good place, so it’s kind of cool to see that.”

“It’s yin and yang. It’s Jekyll and Hyde,” he observed. “So I would suggest for people who haven’t seen Season 5, if you want to see a different Colin & Christie, go back and look at what can happen with a little patience and meditation, and sometimes being spiritual can be good for people.” While Keoghan admitted to having a soft spot for Colin & Christie, he’s equally enamored with Tyler & Korey and feel that their chances of winning are just as good.

Tonight’s the night! Don’t miss the season finale of #AmazingRace at 9/8c! ?

“They’re another team who people love to watch. They have a great friendship,” he said. “It’s great to see their team dynamic; it’s different from any alliance on Survivor or Big Brother. They’re blood brothers. They have this very special relationship and friendship that is great to watch. I really enjoy them, and I think the fans will enjoy having them back.” 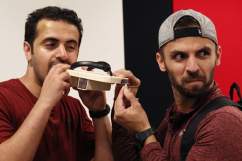 The Amazing Race 31 Finale: Who Gets Eliminated Tonight?