Instagram Amber Portwood has been with her longtime boyfriend Andrew Glennon since 2017. The couple shares one son together - James Andrew Glennon.

Amber Portwood has been with longtime boyfriend Andrew Glennon for several years. The couple met while Portwood was filming Marriage Boot Camp with her ex-fiancé Matt Baier. They started dating back in August of 2017 and welcomed their first child together in May of 2018.

1. Portwood & Glennon Met on the Set of Marriage Boot Camp While Portwood Was Trying to Repair Her Relationship With Her Ex

James aka Bubs, aka Chunk Willis and Formally Known as Bubba ? officially turns 11 months old today!!! So excited I just put his blanky back over him and just couldn't believe how fast time has went by! ? Goodnight everyone hopefully I'll actually be able to go back to sleep. Sending love beautiful souls?? @andrew.glennon love you for giving me a beautiful chance at happiness again in life and I will make sure that everyone feels that love!!! Love always!? #beautifulsouls ❤

According to a source of E! News, the couple first met while on filming Marriage Boot Camp, as Portwood was trying to work things out with her longtime boyfriend and the father of her daughter. According to Glennon’s IMDB page, he has worked on television in the camera department and as a cinematographer for a few short films. Glennon was working on the set of Marriage Boot Camp, while Portwood was a castmate.

An insider revealed to E! News that Portwood’s relationship with Baier “was in bad shape,” and reported that it “made sense for [Portwood] to grow close to Glennon because of the heightened emotions the show brought out the couples on the show.” 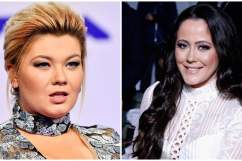 2. The Couple Shares One Child Together – a Son Named James Andrew Glennon

Big Sis and little James! She was so excited to meet her little brother?

Nine months after the reality star and the cameraman made their red carpet debut at the MTV Video Music Awards in August 2017, Portwood gave birth to their son James.

A source told People that the couple welcomed their son on May 8, 2018. Portwood also shares 9-year-old daughter Leah with ex Gary Shirley. Shortly after giving birth, Portwood posted a picture of her daughter Leah smiling while holding her newborn baby brother in her arms.

“Big Sis and little James! She was so excited to meet her little brother,” Portwood captioned the photo.

3. Fans Were Speculating That the Two Tied the Knot After Portwood Referred to Glennon as Her ‘Hubby’

Thank you so much to @sophiaportermakeup for doing such an amazing job doing my makeup and hair this morning! 5 am is early but we did it girl! Heading to @enews #dailypop!? see all you #beautifulsouls soon! #sendinglove ?

During a live Q&A session on Instagram on November 9 last year, Portwood referred to Glennon as her “hubby,” sparking speculation about whether or not the two had gotten hitched in secret. When asked by a fan about whether she had heard about the California wildfires, the Teen Mom OG star replied that her “hubby” was worried about his family.

Although fans believed the couple might have wed in secret, neither Glennon nor Portwood have confirmed the two are married. 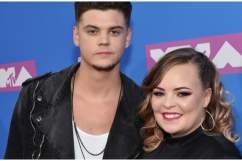 4. Portwood is Excited to be Sharing Her Life With Glennon

Just a couple days before little James was born! I love this beautiful man. What a blessing?

According to People, it was reported that Portwood “spent almost her whole pregnancy feeling sick,” but that she couldn’t be happier to build her new life with Glennon.

“In spite of all that she was just so happy to be starting over with a guy like Andrew,” the source told People. “And now that the baby is here, they are over the moon.”

5. Glennon Has Struggled With Depression & Alcoholism in the Past After Losing His Father

This man taught me that nothing is impossible so long as you believe in yourself. He really proved it too. I woke up to the movie Selena playing which he worked on as a second unit director of photography with @edlachman, such a beautiful film. Around this time last year he was being honored by the Academy for his work on the film El Norte, as it officially became part of the Criterion Collection. From his work on Return of the Jedi to his Emmy win for lensing HBO’s Deadwood, he had a beautiful repertoire. That said, his best work by far was the family he created. The few friends who were fortunate enough to meet this man knew how compassionate, humorous, and amazing he was. His enthusiasm for life was contagious and nothing would stop him from getting you onboard with his latest scheme. Anything is possible. “If you want to know the future, don’t ask a scientist, ask an artist, and trust their instincts.” -James Glennon Happy Birthday to my mentor, father, best friend, and now grandfather of a beautiful baby boy who shares your name. We love you, pal.

Back in September 2017, Andrew revealed to Radar Online that after he found out both of his parents had cancer, he was emotionally unstable. After he lost his father, he fell into a deep depression and turned to alcohol to combat his grief.

“I have been through so much pain in my life,” Glennon told the publication. “My father was diagnosed with prostate cancer while my mother was fighting breast cancer. I prepped myself to potentially lose both of my parents. My mother survived, but my father did not.”

He continued: “Depression, drinking and throwing my heart through any open door,” he said. “It nearly cost my life.”

Read More
Teen Mom OG
Amber Portwood has been with her longtime boyfriend Andrew Glennon since 2017. The couple shares one son together - James Andrew Glennon.