Nik Wallenda and his family members are known for their death-defying stunts and highwire walks. As Wallenda and his sister, Lijana, walk across Times Square, it makes one wonder what happens if either of them fall. Fortunately, they wear safety harnesses, but this is not always the case. In 2017, they were involved in a major highwire accident that resulted in Lijana sustaining severe injuries to her face. Have a look at the video of the incident above.

In a recent interview with the New York Post, Wallenda thought back to the accident and how it affected his sister. He recalled, “She broke every bone in her face. She has 73 screws in her face alone. She still has pain in her heel. This is something she almost feels that she has to do. I think people will be inspired just to see her get back on the wire. Just to move on with life.”

Wallenda also told The Hollywood Reporter that, despite the accident, “Our life and our career has always been about inspiring people to believe that nothing is impossible no matter what challenges you might face, and my sister’s the perfect example of that. That wire almost took her life, and not only is she going to do something that people think is impossible but she’s doing it against all odds mentally and physically.”

The stunt that landed Lijana in the hospital was an eight-person pyramid highwire walk for the Guinness Book of World Records. The fall happened during a Circus Sarasota rehearsal in 2017. Five people, including Lijana, fell 30 feet to the ground, but, it was Lijana who ended up with reconstructive surgery on her face, as reported by USA Today. 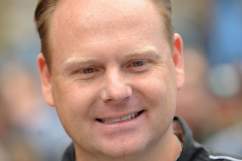 The Wallenda family told ABC that Lijana nearly died in the accident and she has had to overcome a great deal in order to attempt highwire walks again.

The accident occurred in Sarasota, Florida, where the family resides.

Over the years, the family has suffered many tragedies as a result of their highwire stunts. Lijana and Nik Wallenda’s great grandfather fell to his death of live television when he was 73 years old. The family carries on with their stunts, despite the accidents of their family members and friends, but Wallenda has said it’s difficult at times.

Ahead of his tightrope walk across Times Square with his sister, Wallenda said, “I am excited, but it’ll be harder too because I’ll be distracted by my concern for Lijana and her safety and I won’t be able to focus 100 percent on myself, and I need to be focused on myself 150 percent … There’s going to be two of us on the wire, so the wire is going to move uniquely and it’s rigged very uniquely here. There is no way to really stimulate Times Square in Florida, but we did our best to stimulate how that wire is going to feel as we are walking it.” This walk is the highest walk of Lijana’s career and it is her first walk since her accident two years ago.