The Hills: New Beginnings, a reboot of the beloved series The Hills, premieres tonight on MTV. New Beginnings sees original cast members Heidi Montag, Spencer Pratt, Whitney Port, Audrina Patridge, and Brody Jenner face new challenges in their careers while living in Los Angeles. Read on below for the rundown on the premiere start time, what channel the show airs on, and other details.

“THE HILLS: NEW BEGINNINGS” 2019 CHANNEL: The Hills: New Beginnings airs, as usual, on MTV. Click here to access to the MTV channel finder and locate your local station.

“THE HILLS: NEW BEGINNINGS” 2019 LIVE STREAM: If you don’t have cable, you can watch a live stream of MTV on your computer, phone, Roku, Fire TV, Apple TV or other streaming device via one of the following cable-free, live-TV streaming subscription services:

MTV is one of the 95-plus live TV channels included in the main FuboTV bundle.

You can start a free seven-day trial of FuboTV right here, and you can then watch a live stream of the MTV Movie & TV Awards on your computer via the FuboTV website, or on your phone (Android and iPhone supported), tablet, Roku, Apple TV, Amazon Fire TV, Chromecast, or other supported device via the FuboTV app.

If you can’t watch a match live, FuboTV comes with 30 hours of cloud DVR space.

“THE HILLS: NEW BEGINNINGS” SEASON 1 EPISODE 1: The premiere episode is titled “I Don’t Hold Grudges… JK!” and the synopsis reads, “It’s a new beginning for this iconic group of friends, as they return to the Hills and reconnect for the first time in years; while facing new challenges, old rivalries and romances collide.”

Nina L. Diaz, the president of Entertainment for MTV, recently talked with The Hollywood Reporter about what fans can expect from The Hills reboot. “The cast is in different stages — newly married, new parents, newly single and learning to navigate different chapters of their lives,” she explained. “A lot has changed since we last saw the cast on screen.”

“The idea was always — we’d be crazy not to bring it back. The Hills was an iconic series that indelibly shaped the landscape of unscripted TV,” Diaz continued. “It truly is a pop-culture phenomenon. There’s always been huge fandom for this iconic franchise and great love for this cast. The response when we first announced the series return broke the internet. Of course, there’s always pressure in making a show and one as phenomenal as The Hills but, at the end of the day, we feel great about the content and stories captured and think the audience will be in for a real treat.”

As far as the show’s future is concerned, Diaz is confident that New Beginnings will strike the right chord with fans. “We’re hoping fans see behind the celebrity curtain of this group as we shed new light on their personal lives and find a part of themselves in each of them,” she stated. “We hope there will be many new beginnings and new seasons to come.” 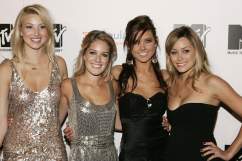 Read More
MTV, The Hills
Find out when the reboot series 'The Hills: New Beginnings' is set to premiere on MTV and what time.