When it comes to anime there are a ton of choices and genres to pick from. With multiple streaming services offering a plethora of shows and movies, it can be tricky to find something new to watch. While many use services such as Funimation or CrunchyRoll to watch anime, Netflix has a pretty strong collection of shows. When deciding on this list we didn’t focus on any specific genre or age group.

This is simply about the quality of the show and not how many seasons are available. Unlike other streaming platforms, some anime on Netflix is missing seasons or lack an English dub option. If you’re a serious fan of anime we recommend picking a dedicated subscription service that focuses on this medium. However, for casual fans here are 17 anime shows that are worth your time.

(Author’s Note: This list is in no particular order and we will update the choices every month.) 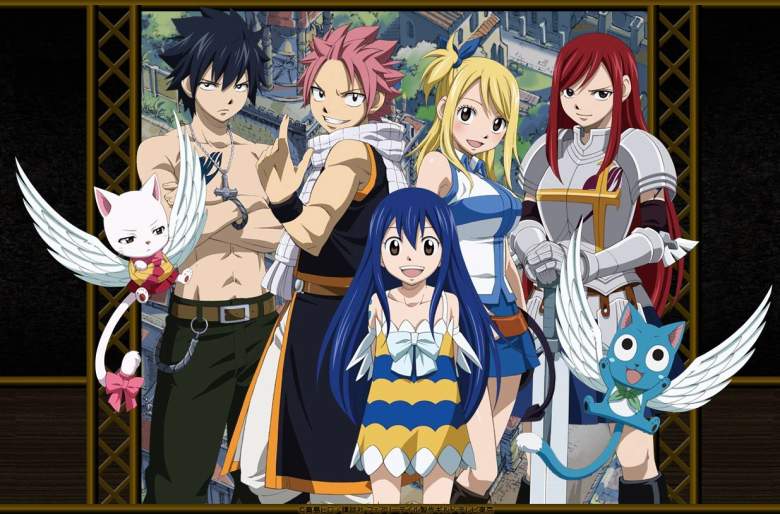 This fantasy anime revolves around a young wizard known as Lucy becomes cursed by a magical charm. Sent to a black market to be sold, she is rescued by the infamous Fairy Tail guild. When offered a spot in their organization, Lucy willingly joins and assists the various members with dangerous missions scattered all across this fantasy land.

An exceptionally over the top anime, Fairy Tail is full of colorful characters, great action, and some truly hilarious moments. There’s some terrific world-building on display that helps flesh out the main cast. Remember, only the first season is available on Netflix, so you’ll need to look elsewhere for the rest of the show. 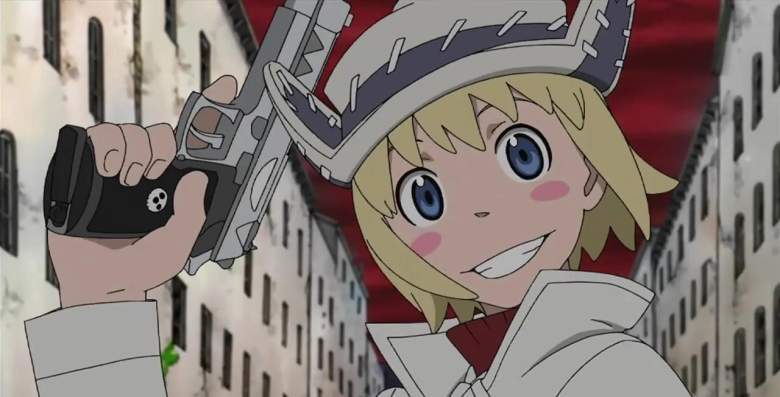 Soul Eater is set in a world where some people can transform into weapons and others wield them to slay demonic beings known as Kishin. The show follows a group of exceptional students and their teachers as they try to save their world from impending doom. While this sounds quite grim, Soul Eater is actually a pretty quirky anime.

A lot of this is thanks to the great writing and wonderful character designs. Couple this with fantastic action scenes to get one of the most beloved anime of all time. If you haven’t checked out this show before, it’s absolutely worth your time. 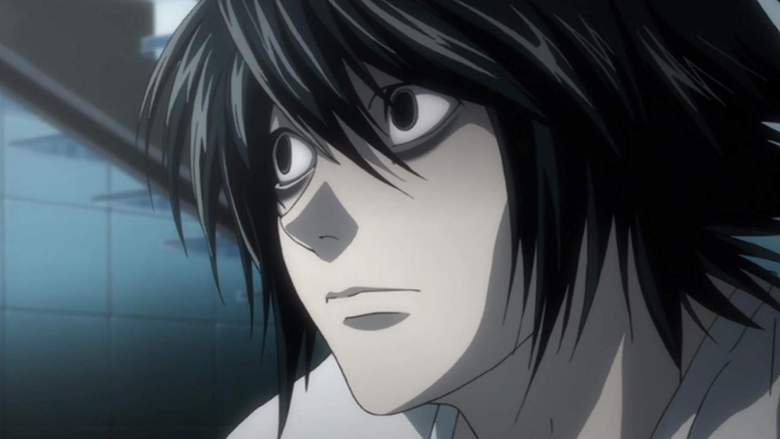 For those looking for something more psychological, consider watching Death Note. While Netflix did release a live-action adaptation, the anime is far better and more coherent. The story revolves around a sociopathic high school student named Light who comes into possession of a Death Note. Since anyone who has their name written in the Death Note will die, Light becomes consumed with reshaping the world to be a better place.

Death Note thrives on keeping its viewers on edge, as the show has dozens of expertly crafted twists and turns. Watching Light go head-to-head with those trying to bring him to justice is a thrill. Even though there are supernatural elements interjected into the show, it never strays too far from reality. This is a show you should not miss, even if you’re not a fan of anime.

Feeling nostalgic? Despite being marketed for children, Yu-Gi-Oh! has garnered a lot of love from people who grew up with the show. For the unfamiliar, Yu-Gi-Oh! blends science fiction, ancient Egyptian mythology, and modern card games into a single show. Our hero is Yugi who is on a journey to save her grandfather and become the best Duel Monsters player in the world.

Even though the targeted audience is on the younger side, Yu-Gi-Oh! still delivers a silly, but fun story. Just keep in mind that basically everyone breaks the card game’s rules, so don’t expect the show to be consistent. 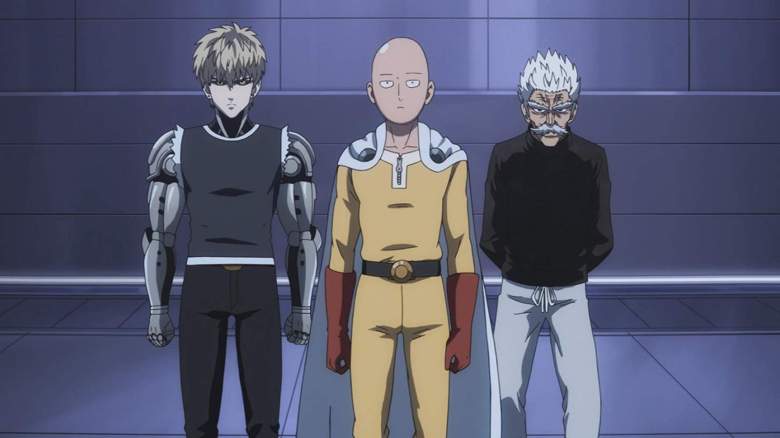 If you have been following anime in any capacity then you’ve probably already heard about One Punch Man. This superhero/action show focuses on a league of heroes that are tasked with defending Earth from aliens, supervillains, or just general chaos. One of these heroes is Saitama, a man who possesses such immense strength that most foes don’t last beyond a single punch. While that may sound boring, One Punch Man does a fantastic job of developing a rich world and awe-inspiring action.

Saitama is a force of nature that constantly pushes himself to find those who can put up a fair fight. However, this is more than just an action show as there is some great humor infused into this anime. One Punch Man can very easily be considered a satire of other anime like Bleach, as the main character has a habit of growing bored during his fights. The whole point is that Saitama is overpowered and what it means to have no one that is your equal. It’s a great subversion of the genre and certainly worth a viewing. 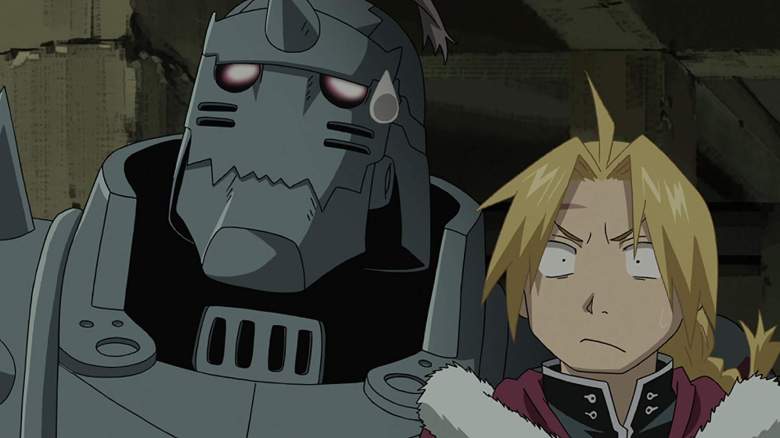 Another popular anime, Fullmetal Alchemist: Brotherhood is considered by many to have the best English dubbed cast. Set in a world where alchemy is real, two brothers attempt to bring their mother back from the dead only to have it backfire. This causes the brothers to suffer extensive wounds, with the youngest of the two having his soul bound to a suit of armor. Now, the brothers have to navigate their dangerous world, but find a way to heal their bodies.

Full of action, humor, and drama Fullmetal Alchemist: Brotherhood is a fantastic show. It’s hard not to fall in love with this show’s characters and you will definitely be shedding a tear or two by the end. You can watch all five seasons right now so there’s no excuse to miss this show. 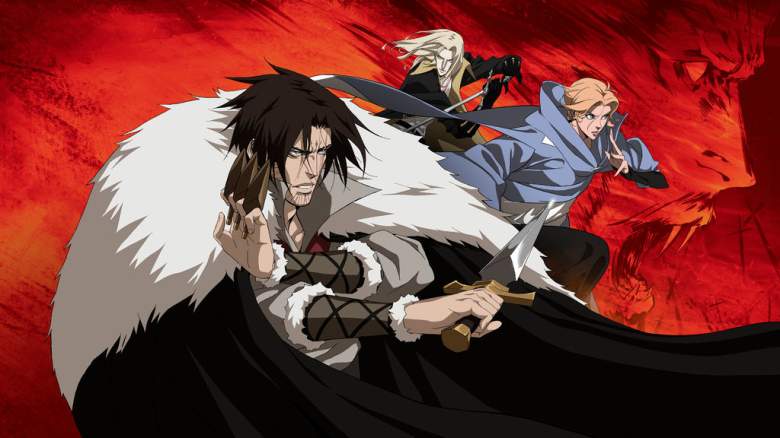 Perhaps one of the best video game adaptations of all time, Castlevania is Netflix’s flagship anime. While this is clearly a big love letter to the game series of the same name, you don’t have to be a fan of these titles to enjoy Castlevania. Given how short this series is, talking about the story in any capacity would spoil some of the show’s best moments.

Every character is extremely memorable, with our lead offering some great dark humor and personality. Dracula is equal parts tragic and terrifying, however, don’t expect him to be at the forefront of every episode. As for the action, there are some great fight scenes, but this show is not for the faint of heart. Castlevania is extremely brutal and macabre, so be prepared for some gruesome imagery. 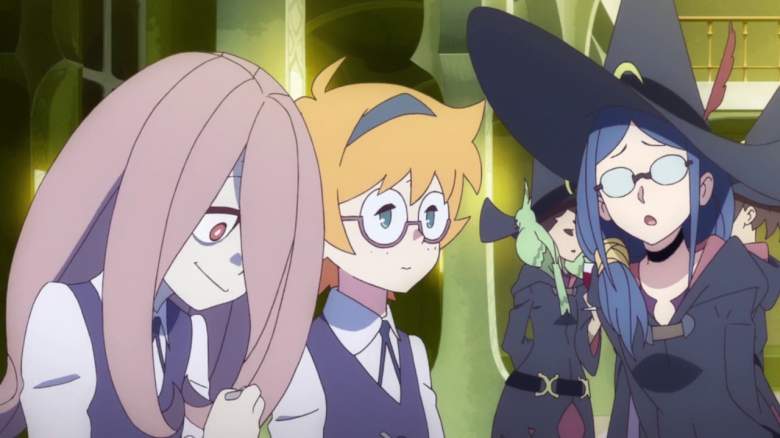 If you want something lighter than Little Witch Academia might be the show for you. The story revolves a young girl named Akko who dreams of going to the Luna Nova Magical Academy. The catch is Akko possess absolutely zero magical abilities, unlike her peers. Inspired by her idol, Akko must navigate the tricky Magical Academy, attempt to make friends, and prove her worth. Little Witch Academia is full of heart and isn’t afraid to place its characters in ridiculous situations. The animation is wonderful and Studio Trigger did a great job with bringing these characters to life. 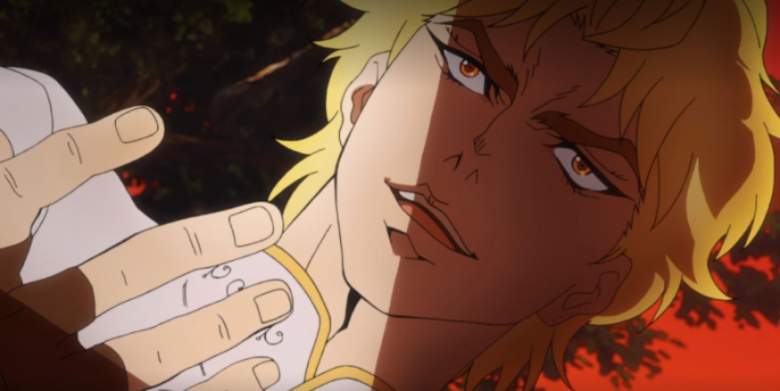 It’s difficult to escape the immense influence that Jojo’s Bizzare Adventure has on pop-culture. Defined by its engaging characters and off-beat humor, there’s a lot to love in this very weird, but compelling anime. The show follows the Joestar family across multiple generations. Each of the different protagonists has their own story and motivations, which helps keep each season feeling fresh. Keep in mind, only the first season is available on Netflix, so you’ll need to search elsewhere for the rest of the show.

10. Code Geass: Lelouch of the Rebellion 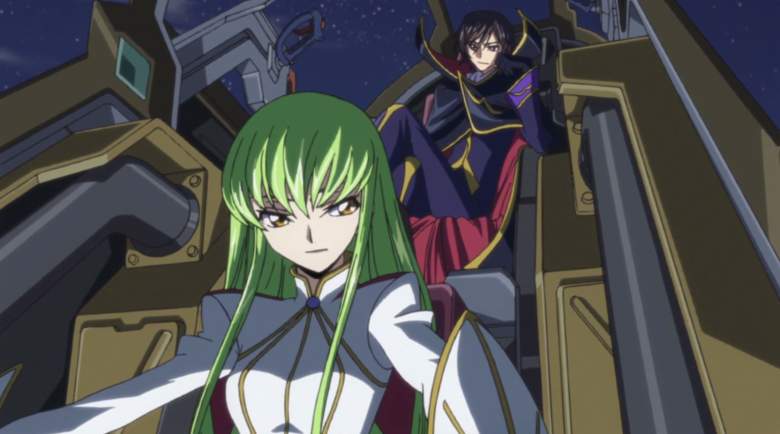 Newly added to Netflix, Code Geass: Lelouch of the Rebellion is set in a world where Britain has taken over most of the known world. With Japan reduced to nothing more than a number, a young, vengeful noble called Lelouch attempts to ignite a revolution for his own gain. Code Geass is filled with political intrigue, engaging action, and giant mechs. Mixing slice of life with sci-fi action, Code Geass excels at blending multiple genres. There’s a fantastic balance of humor, drama, and action that near-perfectly paced across two lengthy seasons. 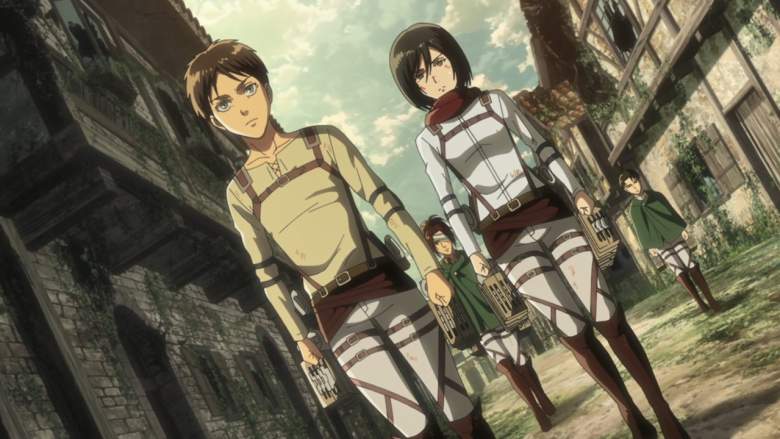 One of the most popular modern, action anime is available on Netflix. Set in a world where giant humanoid monsters known as Titans have pushed humanity to the brink of extinction, this is one of the darkest anime on our list. Attack on Titan is extremely violent and can produce some truly haunting moments. Yet, this show is more than just gore as it focuses on the human relationships of the soldiers involved with killing the Titans.

There are also some surprising twists, especially in the first season, that gives the show a real sense of unpredictability. Keep in mind only the first of three seasons is available on Netflix, so if you like the show you’ll need to look elsewhere for the rest of the series. 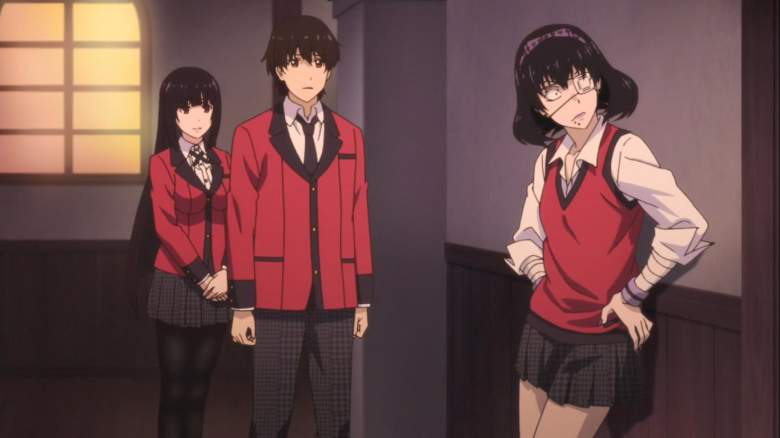 Everything is more exciting in anime and Kakegurui proves it. Centering around a high school where the best gamblers reign supreme, one new student attempts to navigate this dangerous hierarchy. Kakegurui is deliciously over the top with all the drama and excitement usually reserved for action anime shows. Characters all have unique personalities with each one offering their own engaging gaming game.

This is a show that doesn’t take itself to seriously and embraces the wackiness of a school obsessed with gambling. Even though there is a live-action movie, we recommend you skip this and just watch the anime instead. 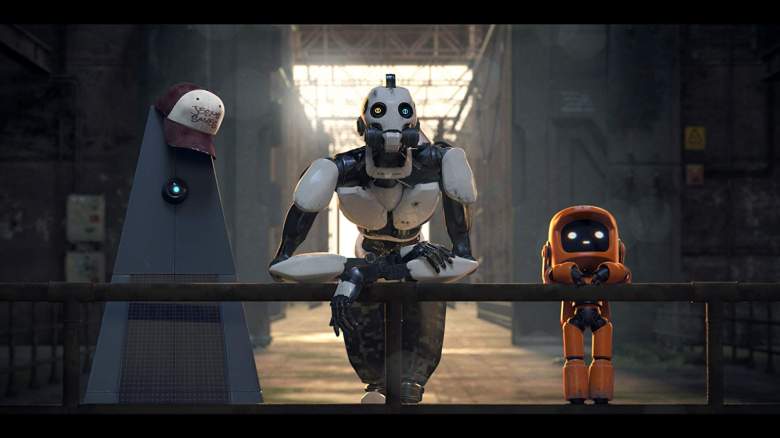 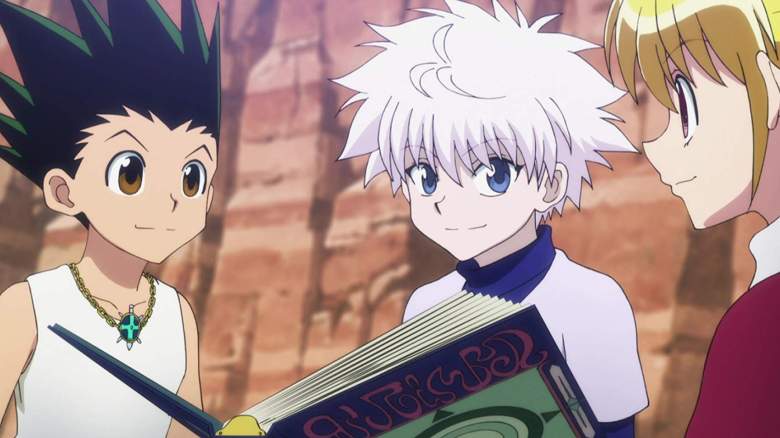 It’s hard not to fall in love with the world and characters of Hunter x Hunter. A charming anime that is full of terrific action and humor, this show follows a young boy on a journey to best the greatest hunter of all time. However, don’t let the upbeat characters fool you, Hunter x Hunter can stray into some dark territory. This isn’t just for shock factor, as the show masterfully balances these two tones to create a captivating anime from start to finish. If you’re a fan of shows such as Yu Yu Hakusho than Hunter x Hunter will be right up your alley.

We’re going to break our rules a little with this one. Unlike everything else on this list, this anime’s plot is broken up across three films.

Berserk tells the tale of a lone swordsman named Guts who is simply trying to make his way in the world. After participating in a castle siege, Guts is recruited by famous mercenaries known as the Band of the Hawk. What follows is a deep, dark, and gut-wrenching story about love, loyalty, and ambition. Don’t let the classic medieval setting fool you, as Berserk willingly dabbles in supernatural themes and monsters

If you’re familiar with Berserk, we still recommend these films. They do a great job of setting the stage for the current anime and offer some terrific insight to Gut’s relationship with his fellow mercenaries. Animation and action are top-notch, with many of the fight scenes conveying a real sense of brutality. Voice acting is also incredibly strong, especially if you’re a fan of English dubbing over Japanese. There’s a reason why Berserk is considered one of the best animes of all time. 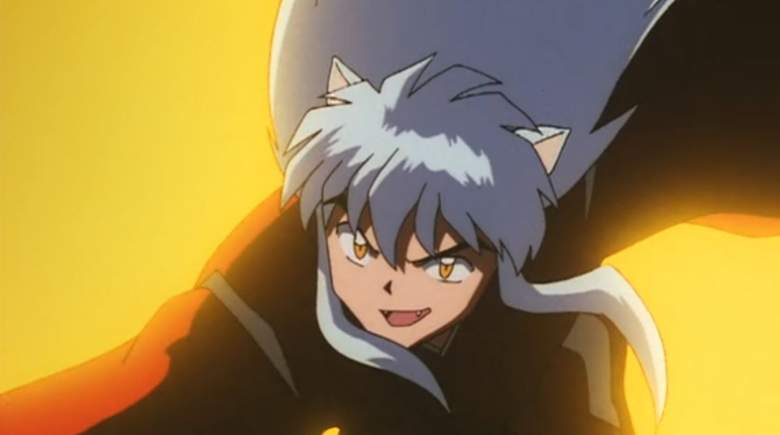 If you grew up in the early 2000s then there’s a strong chance you’ve already seen Inuyasha. Considered a classic in the medium, Inuyasha focuses on a young girl who is transported back in time to feudal Japan. In an attempt to return home, she becomes friends with the half-demon Inuyasha. What follows is a dramatic and dynamic show boasting terrific writing and action. For those beginning their journey into anime, Inuyasha is a must-watch. 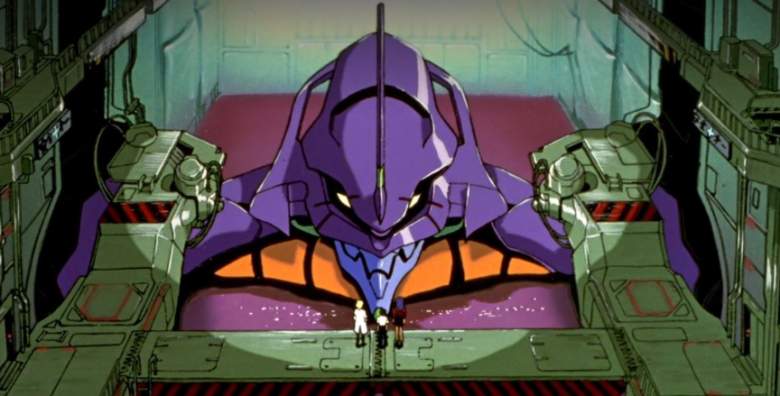 Released in 1995, Neon Genesis Evangelion quickly established itself as one of the greatest anime of all time. More than a show about giant mechs, Evangelion is a brilliantly dark and fascinating tale. Don’t let its age fool you, this show is gorgeous and features some terrific animation, especially given how old it is. If you watch only one show on our list make sure it’s this one. Evangelion is as close to perfect as an anime can get.