The Furries kick off the annual Anthrocon convention in Pittsburgh on July 4. Pittsburgh has hosted this largest gathering of Furries since 2006, and the city is glad to have them. According to VisitPittsburgh, last year’s Anthrocon alone drew more than 8,000 visitors to the city and generated more than $9 million for local businesses.

Most people have a vague idea of what a Furry is: someone who dresses up in an elaborate cartoon animal fursuit to participate in fantasy roleplaying and other events. A history on the Anthrocon website details the philosophy behind the Furries, noting that ascribing human traits to animals is not all that unusual. “We use them to represent our political parties. We talk to our dogs (and some even imagine they talk back, though in their own way). We put a tiger in our tank. We cheer for mascots—anthropomorphic animals dressed in team uniforms—at our favorite sporting events.”

But what do they do at the convention? Every year, the organization raises money for a designated charity and the organization says it has raised $350,000 for various charities since its inception as Anthrocon Albany in 1997. This year’s Anthrocon has a full slate of events, and it’s not *all* about costumes. From the event’s FAQ page: “Anthrocon strives to provide a variety of programming events so that there is something for everyone.”

The majority of the programs inside the David L. Lawrence Convention Center are limited to those registered for the conference and not open to the public, but the online schedule shows a variety of fantasy-themed as well as practical seminars for fursuit enthusiasts. For the general public, the highlight of Anthrocon is the Saturday afternoon parade in Downtown Pittsburgh.

Almost there! Opening Ceremonies will be at 10 AM tomorrow morning in the Spirit of Pittsburgh Ballroom on the third floor of the David L. Lawrence Convention Center. pic.twitter.com/bCpPBrTV94

Here’s what’s going down at Anthrocon:

Yes, it’s a busy day in Pittsburgh with the evening fireworks Point State Park, and yes it’s hot inside those fursuits (Thursday’s forecast is upper 80s with thunderstorms and humidity is high). Some higher-end suits are DIY-equipped with cooling fans, but for some, the internal temperatures can exceed 100 degrees.
After registering, convention goers can socialize with others in the Anthrocon Zoo, then choose from a variety of evening events, including open gaming, a Furry writers meet and greet and at 8 p.m., a session called “Your Imagined Furry Fantasy.” The description says game play “gives players a different perspective on the psychology behind modern-day sexuality and taboo as they adventure in a world where just about everything is over-sexualized (including combat!) to offer silly-fun and sex-positive escapades.”

Then at 9 p.m. a game of Furry-themed Cards Against Humanity will raise funds for charity. Later Thursday sessions include a remembrance of “absent friends” and more role playing games, including a session titled “Are you a werewolf.”

Ready to set sail? The #Anthrocon Fursuit Friendly Cruises are BACK for 2019! More info and tickets at: http://bit.ly/2WvMhTZ⠀ ⠀ Photo: @BartonTheFox on Twitter.'

The Headless Zone opens at 8 a.m. and stays open for the duration of the convention; this is where Furries can take a break from their costumes, with help from a handler if possible. The official opening ceremony kicks off at 10 a.m., then the schedule is packed with events including practical lessons like Fursuit Handling 101, Sewing 101, Fursuit Performance and Safety, Maintenance & Travel Tips.

There are intersectional meetups for atheist Furries, LGBTQ Furries, and newbie Furries, some of which are further separated into categories (rodents, furs, rabbits, cheetahs, etc.). There’s a Furry Logic Escape Room, a poker tournament, a Wheel of “Furtune” game, video game competitions, writing and drawing workshops and a preliminary dance competition. There also are 18+ sessions on fanfiction adult writing and a general “after dark” show. 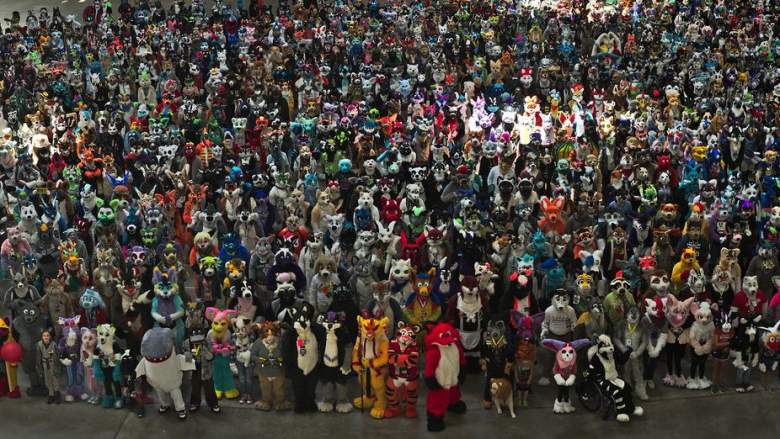 Breakfast, Fursuit yoga, Fursuit Price is Right, comics, meetups for dozens of Furry varieties (metalheads, birds, foxes, ferrets), more escape rooms, more writing workshops and more games are slated for Saturday. The parade, which is open to the general public, leads the Furries around the exterior of the David L. Lawrence Convention Center Downtown for a parade, which draws hundreds of local families and onlookers who want photos of and with the Furry visitors.

The parade may be the biggest public event of Anthrocon, but the Day 4 schedule is packed with events as well. An art show is open to conference attendees and visitors, and there’s an Anthrocon store and dealers section open to convention goers and the public. Sunday’s lineup includes a session for Jewish Furries, more roleplaying games, a Pokemon meet and greet, and the charity auction. This year’s designated charity is PEARL Parrot Rescue, a Pittsburgh-based charity that enables adoption and rehoming for rescued parrots and other birds.

Anthrocon closes out Saturday night with closing ceremonies and one last dance.

READ NEXT: Meet Joe Sestak: The Latest Democrat in the Presidential Race