Hannah Brown has had quite the journey as the star of The Bachelorette 2019 and the finale has finally come. Often, the contestant who receives the first impression rose is the contender who ends up the winner, but this season, the first impression rose went to the season 15 villain, Luke Parker. Parker made it to the final 4, but ended up offending Brown and was sent home. He then returned, in hopes that he would win her back, but he was unsuccessful. This left the final 3 facing another rose ceremony and Brown had to eliminate another man who she had become close to …

BEWARE OF MAJOR SPOILERS BELOW. IF YOU DO NOT WANT TO KNOW THE WINNER OF “THE BACHELORETTE” SEASON 15, STOP READING NOW.

Peter Weber, the pilot, was eliminated from the final 3, with a very heart-wrenching goodbye that played out on national television. And, even though Weber ended up rejected, he told the show’s host, Chris Harrison, that he didn’t regret a thing. On a live segment of the show, Weber said, “This entire journey, I made it a point to always be myself. I wasn’t going to change myself for someone else and I wasn’t going to be someone I wasn’t. I wasn’t going to force anything.”

And as for Brown, People reported that she said Weber’s was one of her most difficult goodbyes. Months after the rejection, Brown revealed to Weber, “I always enjoyed our time together, but I don’t know if it was just you not exactly expressing to me verbally how you felt, if that held me back from emotionally jumping the gun and going all in … I knew I was going to hurt you, but I was also getting hurt too because I was falling in love with you and it didn’t just go away. It’s been really hard for me to watch everything and watch how upset I was that day because everything that we had was real. I was scared I was letting go of the perfect guy.”

With Weber gone, this left Tyler Cameron and Jed Wyatt in the final 2, but only one of them would end up engaged to Brown. Who would be her fiance?

According to Reality Steve, Cameron was originally reported to be the winner, but that was later corrected and Jed Wyatt is said to be the actual winner. Wyatt and Brown get engaged, but it’s not exactly the happy ending Brown hoped for … So, are they still together?

Reality Steve has reported that the couple has split and that viewers will get an inside look at the break up on The Bachelorette finale. But, why did Hannah Brown break up with Wyatt? Perhaps it has something to do with Wyatt putting his music career first since he previously admitted on the show that he had joined The Bachelorette in order to promote his music. Or, the split could have to do with claims that Wyatt had a girlfriend named Haley Stevens when he left to film the show. Whatever the case, Reality Steve reported that they are no longer together. 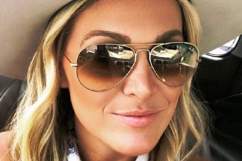