TLC/YouTube Laura's son Liam isn't a fan of his mother's fiancé Aladin, or that she is moving halfway across the world to be with him.

Laura, a 51-year-old retiree and star of the hit TLC series 90 Day Fiancé: The Other Way, flew to Qatar to meet Aladin, 29, after chatting with the personal trainer on Facebook for eight months. In the process of moving to Qatar, Laura left her 21-year-old son Liam behind in the states.

Although his mother left the U.S. to be with the man she loves, Liam doesn’t trust Aladin and questions the Tunisian native’s motives with his mother.

“I don’t understand what Aladin hopes to get out of this. She’s going to be 75 when he’s 45,” Liam told the cameras. “I will never accept him as a father figure, he’s kind of getting the short-end of the stick on this.”

However, Laura seems to know that she is taking a risk by moving halfway across the world to be with a man she met on the internet. “I can’t say that I’m 100 percent making the right choice and it is very possible that I don’t know everything about Aladin. But there’s no guarantees when it comes to love.”

Her son is still skeptical however, telling the cameras that he worried about his mother’s big decision to leave. “I am a bit afraid. She’s going to feel like such a fish out of water. It’s too much for her to handle.”

In the promo above, Laura considers Liam her “best buddy,” and admits that she loves living in Florida with her son but that she and Aladin developed a “really strong bond” when they first started talking, so she is willing to risk everything to move to Qatar to be with him. 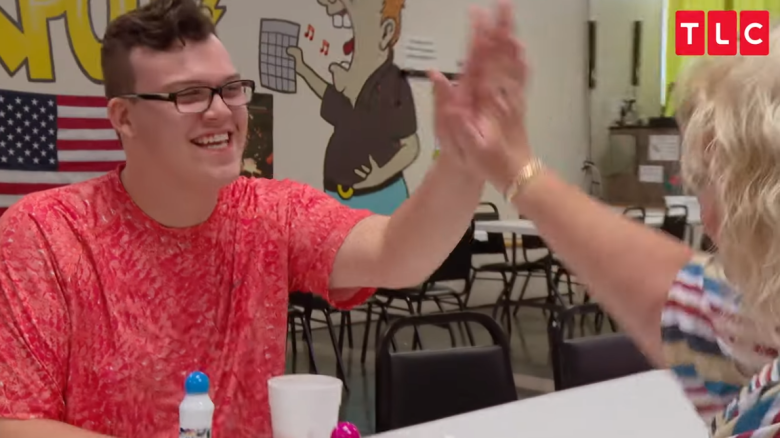 Despite her son’s negative feelings toward her Tunisian fiancé, Laura insists that Aladin “really, really wants to have a nice bond with Liam.” He even suggested that his future stepson come live with them in Qatar, according to Distractify.

But Liam isn’t interested in being involved with Aladin at this time, and decided to remain back in Florida. “It’s going to be extremely hard to say goodbye,” Laura tells the cameras. “My heart is definitely torn in two. I just wish we could all be together.”

However, Laura loves Aladin and considers him her “pot of gold at the end of the rainbow,” she tells the cameras in the promo for the season premiere. The camera shows her video-chatting with her soon-to-be husband, who is taking his shirt off for her and showing off his abs. “That is why I’m willing to move to Qatar permanently.”

Tune in tonight at 9/8c on TLC to catch the newest episode of 90 Day Fiancé: The Other Way.

READ NEXT: Laura & Aladin 90 Day Fiancé Update: Are They Still Together?