Instagram Nicole Nafziger and Azan Tefou, stars of the hit reality series 90 Day Fiancé, are still together despite calling off their wedding several times in the past.

Nicole Nafziger and Azan Tefou, stars of the hit reality series 90 Day Fiancé are still together and going strong, which has fans of the reality series wondering if Nicole might have finally moved to Morocco to be with her foreign fiancé. Fans of the show might remember that Azan was denied his K-1 visa to come to America several times, so the couple was making plans for Nicole and her young daughter May to move to Morocco until he could reapply.

It’s unclear at this time if she is has finally made the move to Morocco, but judging be her social media pages, she appears to still be in the states. There are very few recent pictures of Azan on her Instagram page, with most of the pictures primarily featuring her daughter May and her sister, brother-in-law, and other family members.

She could be taking the photos from Morocco, but Nicole usually adds several hashtags to each of her posts, and none of her captions or hashtags have indicated that she is in Morocco with Azan. We also expect she would be posting more pictures of Azan if she was in his country. She is a pretty avid Instagrammer and usually updates her fans a few times a week, so it doesn’t look like she has made the big move yet.

I love when we just take tons of pictures together in the morning ? #sleepyheads #pjs #momanddaughter #love #fun #photoshoot #shotoniphone #iphonography #90dayfiance #90dayfiancehappilyeverafter

Nicole has been making plans to move closer to Azan for some time, which sparked some concern among viewers who didn’t think she should move her young daughter to the foreign country. The couple has called off their wedding twice in the past, and fans weren’t sure how serious Azan was about Nicole, so they worried about Nicole moving her 5-year-old daughter halfway across the world and uprooting her from the life and school she knows in the states.

Nicole called out the concerned fans on her Instagram stories, posting a long rant and calling the naysayers the “most annoying group of judgmental people,” and telling them to mind their own business. She also mentioned that America is not the best country for schools and that her daughter is only in Kindergarten so her education consists of learning how to play nice with other kids and make art.

“You can watch a stupid show all you want but you will never truly know me,” she wrote on her stories. “You can say whatever the heck you want about me but don’t you dare challenge my role as a mom. I am a damn good mom to my child. Y’all call me young and immature but y’all are the ones who are so damn absent minded [sic] about living in other parts of the world with your children. Y’all can’t even see that America isn’t the #1 best country for schools. I’m not saying Morocco is #1 either but that doesn’t mean it’s a bad school.” 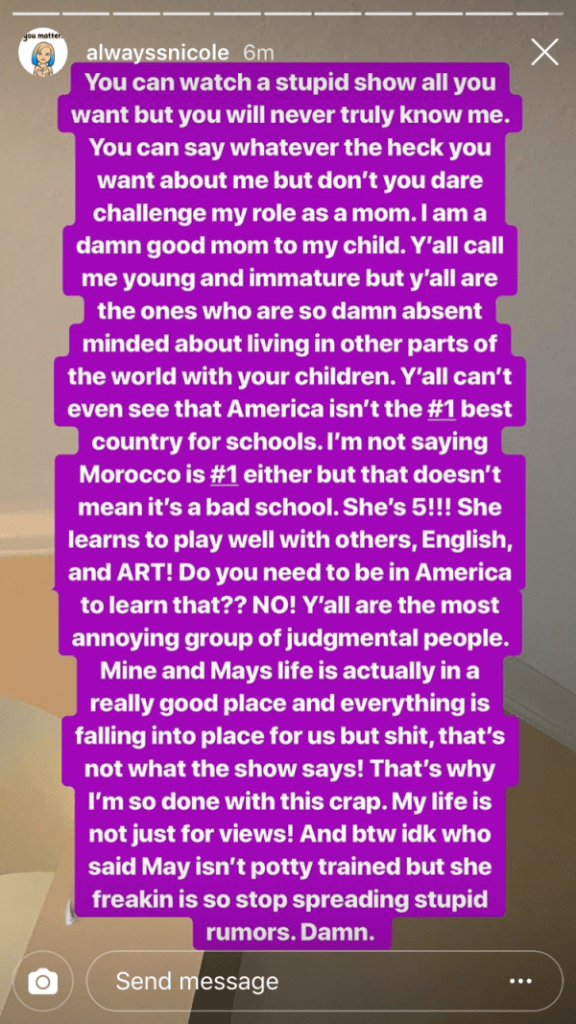 She continued: “She’s 5!!! She learns to play well with others, English and ART! Do you need to be in America to learn that?? NO! Y’all are the most annoying group of judgmental people. Mine and Mays life is actually in a really good place and everything is falling into place for us but shit, that’s not what the show says! That’s why I’m so done with this crap. My life is not just for views! And btw idk who said May isn’t potty trained but she freakin is so stop spreading stupid rumors. Damn.”

All in all, Nicole’s lack of Morocco/Azan posts might not mean anything in the grand scheme of things. It could just be in hers and Azan’s contracts with TLC that they can’t share photos with each other until the season concludes, so fans are just going to have to wait and see if she moved by tuning in to 90 Day Fiancé Sundays at 8/7c.

READ NEXT: Colt Johnson Net Worth on 90 Day Fiancé: 5 Fast Facts You Need to Know