On The Bachelorette 2019, Hannah Brown’s men have had several girlfriend scandals, meaning that some of them have been accused of having girlfriends at home while filming. In fact, one contestant was sent home for this very reason. And, front-runner Jed Wyatt’s alleged ex, Haley Stevens, has spoken out about dating Wyatt up until he left to film the show. But, those aren’t the only guys with girlfriend issues.

Peter Weber is one of the front-runner contestants on The Bachelorette this season and he is facing a girlfriend scandal, according to E! News. Model Calee Lutes, who claims to be Weber’s ex, told Entertainment Tonight that she dated the pilot for five months before they broke up unexpectedly in December 2018. She revealed, “Peter and I met through a dating app in June of 2018. I live in Atlanta, and he lives in L.A. He had just been hired by Delta, so he was in Atlanta for a month for training. We hit it off and decided to continue dating long distance after his month was up.”

Lutes and Weber reportedly carried out a long-distance relationship and Lutes claimed, “We were very serious. He told me he loved me for the first time in October, and we talked almost every time we saw each other about how we were going to make it last long term. He wanted me to move out to L.A. to be with him, and he wanted us to get an apartment together. I was open to moving out there for a year or so, to give our relationship a fair chance, but he told me he didn’t want me out there temporarily … he wanted me out there “forever.” We also talked about kids, down to the logistics of how we would fly them back and forth between L.A. and Atlanta to visit my family if we did settle down in California. We talked about all of this right up until he broke up with me.”

Lutes Said Weber Broke Up With Her for No Reason

She then said that he broke up with her right before Christmas and that he “didn’t really have a reason why”. She said that she noticed Weber had a Bachelorette producer following him online and that he soon deleted every trace of their relationship on social media, even her comments.

Lutes went on to say, “Things didn’t work out simply because he chose to go on The Bachelorette instead … He absolutely betrayed me. He interviewed for a reality dating show while simultaneously planning a future with me. I trusted him entirely and he pulled the rug out from under me. Also, if all of this wasn’t bad enough, I’ve had multiple people reach out to me and tell me that he was seeing other women while we were exclusive.”

Weber Allegedly Never Told Lutes About His Being on ‘The Bachelorette’

‼️‼️‼️‼️‼️
Pete CHEATED on his girlfriend and auditioned for the #TheBachelorette behind her back. HE IS SCUM
I REPEAT
TERRIBLE HUMAN
Hannah deserves better.
EVERYONE DESERVES BETTER.

Lutes revealed that, “When I found out about the show, I texted him and told him that he owed me an explanation, but I never heard a word back. That’s the most shocking part of all … I thought he would’ve at least had enough decency to apologize.”

According to Newsweek, Weber has not spoken out publicly about his alleged ex’s claims. 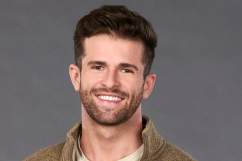