Vinny Guadagnino and Pauly “DJ Pauly D” DelVecchio teamed up for a reality dating show on MTV called A Double Shot at Love. Women competed for chances to become the girlfriends of the two stars, but, in the end, who did Pauly D and Vinny pick to be with? Ahead of the show’s finale Reality Blurb posted spoilers that Guadagnino picked contestant Alysse Joyner, while Pauly D chose no one, announcing, “I’m rolling solo for now.” So, DJ Pauly D is still single … and Vinny is too.

When Vinny picked Alysse to be with at the end of A Double Shot at Love, Us Weekly reported that he told her, “Since the first minute we chilled with each other, I’m always drawn to you. It’s effortless when I hang out with you. I know you’re shy and introverted, and I am too. But if you’re ready for a shot at love, so am I.”

On June 27, 2019, Vinny told his Twitter followers, “Unfortunately, Alysse and I weren’t allowed to see each other publicly after filming for 5 months until the finale aired to not spoil the ending. Very weird situation to be put in after the finale. I struggled to keep it alive through text. Still think she’s amazing. Wish her the best.”

According to Alysse, Vinny “ghosted her” after the show, as reported by In Touch Weekly. After filming, Alysse put Vinny on blast, saying that once filming for the show was done, their relationship basically was done as well. In fact, Alysse claimed that Vinny tried to move in on another woman named Maria Elizondo, who allegedly shot him down. And, when Vinny posted his version of their break up on Twitter, Alysse fired back, tweeting, “BULLS—TTTTTTT. If you liked me soooo much you would wanna text me, nothing that came out yo mouth made sense, sound stupid … The funniest thing is, @VINNYGUADAGNINO kept askin me who I’m close to in the house, I’ve been said @mariae296 and this dumb ass still hit her up (knowing we’re friends) but couldn’t text me back.” 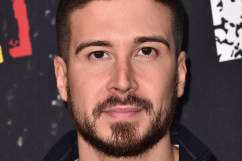 Reflecting on filming the show with his buddy Pauly D, Vinny told People that it was a bit awkward. He explained, “It was weird for two reasons,” Guadagnino explained. “One, it would cause drama, so of course people would be upset and jealous. Then there was this other weird part where you would hook up or kiss [someone], and those girls were all friends with each other! It got really weird. Like, are you guys buddy buddy after that?”

And, when it comes to what kind of woman he wants to end up with in the future, Vinny said, “I am a very complex person — there are elements to me that are nerdy, then there are elements to me that are ratchet. So I like someone that has all that balance, someone that I can binge-watch some nerdy documentaries with, but then knows how to dance and twerk in the club … I also want someone who’s independent, who isn’t in it for the wrong reasons. She has to have so much of her own career going on, she doesn’t need me for anything. I want to be her fan.”

Read More
Jersey Shore, Pauly D
Vinny Guadagnino and Pauly D met girlfriends on their dating show, but did those relationships last? Are they still together with those girls?