The quarterfinals begin on tonight’s episode of America’s Got Talent. The episode will see popular acts from previous rounds return with the hopes of impressing the judges and and making it through to the season 14 live rounds. But which contestants will be eliminated before the live rounds?

Based on the performances for the quarterfinals, there are a few acts who we predict will be sent home. The Messoudi Brothers appear underwhelmed after one of the duo suffered an injury during rehearsal, and the injury shows, as they failed to live up to the high bar they previously set. There is also Alex Dowis, who continued to bring his detailed paintings to life tonight, but whose performance felt more tedious than usual. Simon Cowell likened it to science museum art.

In addition to the Messoudi Brothers and Alex Dowis, we predict that GForce and Carmen Carter will be eliminated during the next episode, as both acts were criticized for failing to improve on their auditions.

Read on for a live recap below of tonight’s episode below.

8:10 – GForce takes the stage as tonight’s first act. The dance group perform an original song that has lyrics about “doing their own thing.” The choreography is exciting, and their energy goes over well with the audience, but not so much with the judges. Simon Cowell said that they have a shot at making it big, but he criticized their songwriting and advised them to work on refining their craft. Gabrielle Union reminded Cowell that he urged them to write their own songs, but the latter sticks to his guns.

8:20 – Greg Morton is the next performer to take the stage, and he dazzles the crowd with his film voice impressions. Some of the films that are referenced during his act include Ace Ventura, Braveheart, Guardians of the Galaxy and the original Lion King. The audience and the judges were uniformly impressed. Union told Morton that he raised the bar for what he does and Julianne Hough said that she was impressed by how he’s able to balance references and comedy in a fresh manner.

8:30 – Carmen Carter rounds out the first trio of performers tonight. The singer delivers a swaggering rendition of “Believer” by Imagine Dragons, complete with high notes and an impressive flow during the verses. This is the third consecutive cover that Carter has done on AGT. Union and Hough were pleased with the performance, but Cowell was more critical, and wondered aloud whether the song choice was the best fit. Howie Mandel was similarly conflicted, as he felt that Imagine Dragons was not the right musical vessel for Carter’s talents.

8:40 – Emerald Belles is next up, and the dance team give a knockout performance comprised of synchronized moves and jittery rhythms. Union, Hough, and Cowell have nothing but good things to say about the performance, but the biggest compliment comes from Mandel, who wasn’t high on the team the first time around. Mandel admitted that he was wrong, and said that the higher production value, coupled with the intensity of each member, made for a “spectacular” viewing. 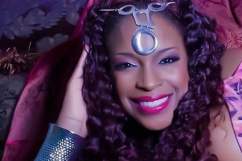 Carmen Carter on AGT: 5 Fast Facts You Need to Know

8:50 – Sophie Pecora is the next performer, and this will be the first time she takes the stage since Brad Paisley gave her the Golden Buzzer. Pecora took a few chances tonight, including a rapped segment at the beginning of the song, but she fumbled a lyric at the end, and she appeared visibly nervous. Despite her mistakes, the judges had positive feedback for Pecora, and urged fans to vote for her in support of her anti-bullying lyrics.

9:00 – We move on to the Messoudi Brothers, who draw a mixed reaction from the judges. One of them suffered an injury during rehearsals, and the injury shows, as they leave lots of dead air between tricks and fail to reach the heights of their previous performance. Hough and Mandel are generally optimistic about the Messoudi Brothers, but Cowell is noticeably disappointed, and he refuses to partake in the standing ovation. He felt that the act wasn’t as dangerous as it should be.

9:10 – Voices of Service take the stage and give an emotionally poignant performance. As a means of stepping up from their last audition, the group of military veterans adds a choir, and the results are dazzling. The judges were uniformly ecstatic, and Union went as far as to beg the viewers at home to vote for Voices of Service. They look like a shoe-in to advance to the live rounds.

9:20 – We then get to Ansley Burns. She was cut in the second round of the competition, but she returns tonight as a wild card pick. In classic AGT fashion, Burns rises to the occasion, and gives arguably her best performance to date. The judges are enthused, and even Cowell, who has been critical of her in the past and said that her song choice was iffy tonight, said that he admired her stage presence and energy.

9:30 – Alex Dowis took the stage tonight to tell a story of the universe through his paintings. His story consisted of dinosaurs, their extinction, and the subsequent rebirth of the planet through vegetation and primates. Union and Mandel were thrilled with the display, but Cowell, once again, is underwhelmed. He said that it felt too much like science museum art.

9:40 – Luke Islam is the second Golden Buzzer winner to return tonight. His cover of “You Will Be Found” from Dear Evan Hansen is a success, and the judges and crowd couldn’t be more pleased. Cowell was particularly impressed with Islam’s vocal control, given his relative youth. Expect to see Islam return for more.

9:50 – After Luke Islam comes acrobat group Bir Khalsa. The group performs some very intense and very unusual acts, like splitting a zucchini with a chainsaw while it was in the mouth of another member, and smashing ice blocks with swords over the bodies of another. It worked like a charm on the judges. The typically finicky Cowell said their act was “fantastically crazy and fantastically dangerous.”

10:00 – Kodi Lee is the final Golden Buzzer act to perform tonight. He sits at a piano, and delivers a jaw dropping rendition “Bridge Over Troubled Water” by Simon and Garfunkel. Easily the performance of the night. The crowd chant his name as he wraps up the song, and Union is overcome with emotion as the episode comes to a close. Lee is the performer to beat.