The long-awaited reunion of the cast of Beverly Hills 90210 has been airing with such success that a season 2 is already being talked about, according to E! News. BH90210 airs on Wednesday nights, at 9 p.m. ET/PT and 8 p.m. CT, on the Fox network. For those who would like to watch the show but do not have a cable subscription or login information, you can still watch the show online.

If you don’t have cable, you can watch a live stream of Fox on your computer, phone, Roku, Fire TV, Apple TV or other streaming device via one of the following cable-free, live-TV streaming subscription services:

Fox (live in most markets) is one of 95-plus live TV channels included in the main FuboTV bundle.

You can start a free 7-day trial of FuboTV right here, and you can then watch a live stream of Fox on your computer via the FuboTV website, or on your phone (Android and iPhone supported), tablet, Roku, Apple TV, Amazon Fire TV, Chromecast or other supported device via the FuboTV app.

In addition to a Netflix-like on-demand streaming library, Hulu also offers a bundle of 60-plus live TV channels, which includes Fox (live in most markets). 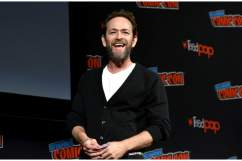 You can sign up for “Hulu with Live TV” right here, and you can then watch a live stream of Fox on your computer via the Hulu website, or on your phone (Android and iPhone supported), tablet, Roku, Apple TV, Amazon Fire TV, Chromecast, Xbox One, Nintendo Switch, Echo Show or other streaming device via the Hulu app.

PlayStation Vue–which doesn’t require an actual PlayStation console to sign up or watch–offers four different live-TV channel packages, all of which include Fox (live in most markets).

You can start a free 5-day trial of PS Vue right here, and you can then watch a live stream of Fox on your computer via the PS Vue website, or on your phone (Android and iPhone supported), tablet, Roku, Amazon Fire TV, Apple TV, Chromecast, PlayStation (3 or 4), or other supported device via the PS Vue app.

Fox (live in select markets) is included in the “Sling Blue” channel package.

You can start a free 7-day trial of Sling TV right here, and you can then watch Fox live on your computer via the Sling TV website, or on your phone (Android and iPhone supported), tablet, Roku, Apple TV, Amazon Fire TV, Chromecast, Xbox One or other streaming device via the Sling TV app.

In addition to the above streaming options, fans can purchase episodes of the show on Amazon, as well as the entire season, as they become available. Season 1 of BH90210 is available for $14.99 in HD and SD for $9.99.

When it comes to talks of a second season, the show would give die-hard fans what they’ve been waiting for … the original characters from Beverly Hills 90210. The reboot is about the actors, who are playing heightened versions of their actual selves, with fictional storylines meshed with their real lives. Season 2 would be showing the stars filming an actual reboot, which would mean that characters Kelly Taylor, Brenda Walsh, Brandon Walsh, Steve Sanders, Donna Martin, Andrea Zuckerman, and David Silver would return to the small screen.

In an interview with E! News, Tori Spelling explained, “This season you’ll just see us kind of getting back together and finding our friendships again, and starting to film the reboot, so next season would be like a full-on reboot, so it would be a show within a show.”

As BH90210 heads into episode 3, actress Christine Elise McCarthy, who played Emily Valentine on the original show, returns to head up the fictional reboot. It’s clear that she doesn’t like many of the cast members and is eager to get on set. Each of the cast members have gotten threatening, anonymous mail on their front steps, from a stalker who is applying to be Brian Austin green’s assistant. Jason Priestley and Ian Ziering’s fictional wives have both been cheating, but Priestley’s wife is pregnant and the man she’s been having an affair with is a writer on the reboot.

The third episode is titled “The Photo Shoot” and the plot description of what to expect reads, “Tori starts to feel the pressure of balancing the cast’s requirements; Jason and Ian both struggle with their marriage issues; Jennie meets her new bodyguard; Brian hires a new assistant; Gabby asks Christine for advice.” And, episode 4 is called “The Table Read”. It is set to air on August 28, 2019 and the synopsis states, “When the table read serves up major disappointment, the cast bands together to try to rewrite the script, but can’t come to an agreement on storylines; Shannen questions her decision to join the reboot.”

Read More
Reality TV, TV
The reboot of Beverly Hills 90210 is finally here. Read on for the rundown on how to watch tonight's new 'BH90210' episode 3 online via live streaming.