Caelynn Miller-Keyes has a bone to pick with Blake Horstmann on Bachelor in Paradise 2019, but before we get into any spoilers on the two, THIS IS YOUR MAJOR SPOILERS WARNING. If you don’t want to know about their breakup, dating relationship or what happens to them on season 6 of BIP, STOP READING NOW.

With that out of the way, let’s get into what goes down between the two.

When Miller-Keyes arrived in Paradise, she told host Chris Harrison that she had been dating a bit before the show. She then said that Blake Horstmann wasn’t her favorite person and that he was the person she had dated. Miller-Keyes said that Horstmann “played” her and that they dated for a few months.

As she made her way down to the beach to meet everyone, Horstmann immediately went off to the side to hide and was clearly unhappy about Miller-Keyes’ arrival.

Caelynn Miller-Keyes Is on a Mission

Miller-Keyes ends up venting to bartender Wells Adams, saying that Horstmann even joked about skipping Paradise to hang out with her. She said they slept together the weekend of the Stagecoach festival and she realized that he was messaging Hannah Godwin from The Bachelor, while in bed with her. Miller-Keyes also said that Horstman then admitted to having sex with Kristina Schulman the night before this. She also said that at one point, Horstmann “ghosted” her and stopped all communication. But, she said he called her two weeks before BIP to make sure she wouldn’t tell anyone about their relationship. Miller-Keyes said on the show that Horstmann was a smooth-talker and that she was really into him.

Miller-Keyes said she didn’t want any of the other women on the show to date Horstmann because he just wasn’t a good guy.

On the show, Miller-Keyes ends up finally confronting Horstmann, who is shown crying in a promo clip. Miller-Keyes cries, telling Horstmann that she felt like a dirty secret and that it was disgusting.

Horstmann is outed as a player by Miller-Keyes to the other women on the show, but Horstmann still ends up having romantic moments with other cast members. In a promo clip of the season, Horstmann is shown kissing Hannah Godwin. Plus, he did take out Tayshia Adams on a solo date and he ends up going on a date with Caitlin Clemmens, who joins the show later this season. He also dates Schulman on the show as well. But, Horstmann doesn’t end up engaged to anyone or in a relationship. According to Reality Steve, Schulman ends up rejecting him at some point.

As for Miller-Keyes, Reality Steve reported that she dates Connor Saeli and Dean Unglert on the show, but she ultimately ends up with Unglert after some back and forth drama. 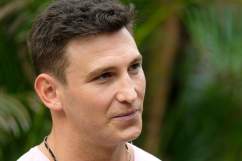 Read More
Bachelor In Paradise, Chris Harrison, Reality TV, The Bachelor, The Bachelorette, TV
Get the spoilers on Caelynn Miller-Keyes's confrontation with Blake Horstmann on Bachelor in Paradise 2019 and details on their Stagecoach encounter.