At tonight’s 2019 VMAs, boyfriend Shawn Mendes and girlfriend Camila Cabello walked the red carpet separately, but there were in attendance to perform together. Mendes first performed his song “If I Can’t Have You” before taking the stage with Cabello for a duet performance of their song “Senorita”.

For “Senorita”, which was later in the show, Cabello donned a sheer, white dress that was netted, with beading. Mendes wore a white tank top with suspenders, while he played the guitar, with Cabello dancing behind him. The stage was dark and adorned in small round lights. Cabello danced around Mendes and they soon performed back to back. The two came very close to kissing, toying with the audience, before backing up and continuing with the performance. They held hands, Mendes twirled Cabello and they couldn’t help but smile at each other.

At the end of the performance, the two sang within inches of each other, face to face. Then Cabello rubbed her nose up against Mendes’ to wrap up the performance.

When Camila Cabello and Shawn Mendes teamed up for their hit “Senorita”, it may have been a surprise to some fans that they started dating, but a source told Us Weekly, “The more time they spent together, the more they started having feelings for each other. It quickly turned into a fun, lighthearted summer fling-type situation, but now it’s developing into something more serious.”

They went on to be photographed hanging out, kissing, holding hands, and spending time together with family. And, performing together, they are giving fans an up-close look at their chemistry as a couple.

LOOK HOW EXCITED JOE JONAS WAS AFTER SHAWN AND CAMILA’S PERFORMANCE. #VMAs pic.twitter.com/dEj7UDaSmm

Billboard recently reported that the couple’s “Senorita” hit number 1 on the Billboard Hot 100’s chart. And this isn’t the first time that Mendes and Cabello have teamed up for a song. The two previously had the duet “I Know What You Did Last Summer,” which rose to number 20 on the Billboard Hot 100 list, three years ago, in January 2016. When talking with Billboard about their song doing so well, Mendes said, “I’m so excited about the success of ‘Señorita,’ and thank you so much to our incredible fans who made this all a reality. We really put everything into this song and couldn’t have wished for more.” Cabello added, “Thank you to our fans; we could not have done this without you. We are so grateful and I’m so happy to share this moment with Shawn.”

Have a look at their sexy “Senorita” music video together below.

Cabello and Mendes have not been shy with their public displays of affection, so fans were probably hoping for a live, on-air smooch at the VMAs, but they didn’t get it. Ahead of the VMAs, Us Weekly reported that the couple was nervous about their big performance. An insider told Us Weekly, “Shawn and Camila are really nervous about nailing their performance and have been rehearsing a lot of for the VMAs. Since it’s the official debuting of them as a couple and they want it to be amazing and perfect.” 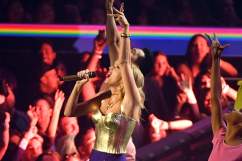