Getty Attendees walk past a Marvel display at the 2019 D23 Expo.

As per custom at D23, Sunday becomes a theme park spectacle when the much awaited Disney Parks presentation gets underway. The 2019 addition is no different when it comes to fun, surprises, and a few announcements that fans were expecting. Here’s a rundown of everything you need to know if you missed the big event.

The Avengers Are Coming

An artist concept of Disney Parks Avengers attraction as revealed during the D23 panel.

Marvel is finally making its way to Disney Parks with what appears to be an ambitious international themed Avengers Campus. Opening in 2020, the California Adventure version of this attraction focuses on immersive experiences with The Avengers’ most popular characters. Guests will be recruited into the next generation of superheroes as they meet Doctor Strange, Black Widow, Ironman, Star-Lord, Gamora, Groot, Black Panther, Thor, and Loki.

Disney reveals their new concept art for an upcoming Spider-Man ride during D23.

Two new attractions highlight Avengers Campus as Spider-Man gets the honor of starring in the area’s first full ride. Guests visit WEB (Worldwide Engineering Brigade) during an open house for the public. Among the young inventors there, Peter Parker has some interesting inventions he wants to show off; one is the Web Slinger vehicle, the other is escaped Spiderbots that are far from ready for their debut. As guests take a test drive in the Slinger vehicle, they must join Spider-Man to save the day while the Spiderbots cause chaos.

A new E-Ticket ride was also announced during the panel. Details are sketchy on what it will be, but there were a few breadcrumbs thrown out to the audience. Everyone on the ride will visit Wakanda and fight with The Avenges on what promises to be a new ride system designed just for this purpose. Expect the ride to be revealed during the promised Phase 2 of the Avengers Campus.

Disneyland Paris will also be getting in on the action with a campus of their own as well as an updated hotel with Marvel art and themed suites. Meet and greet opportunities with Avengers favorites will also be on hand at both the hotel and the park.

Epcot As You Know It Is Changing 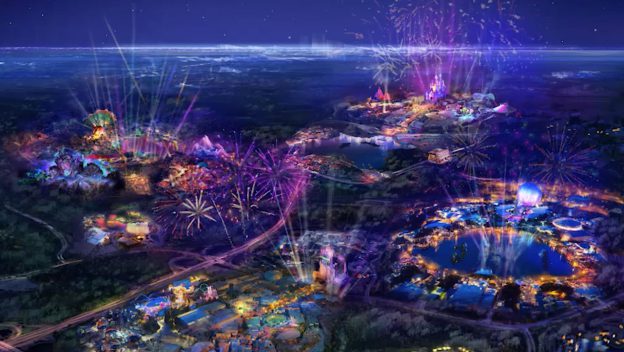 DisneyA new plan for Epcot was revealed at the 2019 D23 Expo.

The Magic Of Possibility is a new slogan for the park’s transformation. Instead of the current design, guests will encounter four neighborhoods: World Showcase, World Nature, World Discovery, and World Celebration.

Celebration will feature an updated version of the original fountain as well as a revamped Spaceship Earth. The latter attraction is scheduled to include new scenes, a new guide called the Story Light, and a few other surprises yet to be revealed.

Spaceship Earth is still a major part of Epcot in this artist concept.

Discovery is where Marvel finds its way into the park. Guardians of the Galaxy: Cosmic Rewind is the park’s first reverse launch coaster and features all of the film’s characters in a new adventure. Space 220 also arrives with a one-of-a-kind dining experience that coincides with rides such as Mission Space. Guests are “transported” to space for a dinner experience that offers a realistic experience and unforgettable views.

Nature presents a more conservationist mentality among the new theme park attractions. The biggest addition to this area is a Moana themed trail highlighting concepts featured in the film. Guests who take the walk will learn about water’s importance to all life and how its cycle affects who all.

World Showcase also wants in on the attractions with the announcement of Remy’s Ratatouille Adventure. Guests will be shrunk down to the size of the famous Pixar character when the ride opens in 2020. In the UK, Mary Poppins makes her long awaited debut in Disney Parks as the pavilion is set to include a replica of Cherry Tree Lane.

Star Wars Gets a Hotel 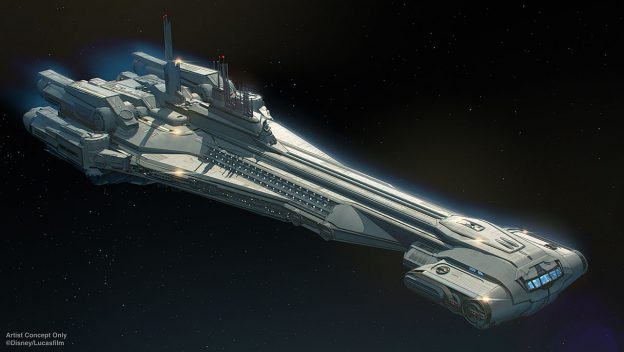 Disney reveals their much hyped Star Wars hotel in this D23 artist concept.

Galactic Starcruiser Halcyon is welcoming aboard passengers(guests) for its two night cruises into space. The hotel is fully themed with an immersive experience that insets passengers into their own adventure. Among the itinerary, visitors to the hotel experience being blasted into space via pods, venture into the world of a working cruiser complete with alien crew, face off against enemies, and visit the port of Batuu. No word on the opening date, but it appears to be closer than previously thought based on current renderings and information.

Brand New Looks at Runaway Railway and Rise of the Resistance

While the announcements of Runaway Railway and Rise of the Resistance are nothing new to Disney fans, any new information on the ride’s progress has been slow in coming. Bob Chapek, Chairman of Parks, Experiences and Products, updated details on both attractions during the panel.

A proposed entrance to the new Runaway Railway ride at Disneyland.

Runaway Railway has a twist that even the chairman himself refuses to give away, but the biggest news concerning the ride comes from new glimpses of both Disneyland and Disney Hollywood Studios buildings that house the Mickey Mouse themed ride. Once home to The Great Movie Ride, Disney Hollywood Studios’ Chinese Theatre is getting an overhaul as it expects more traffic from guests. It appears to keep the original look with only slight updates in styling and signage.

Rise of the Resistance at Disney Parks promises an up-close experience with AT-ATs.

While Smuggler’s Run has been open since day one of Galaxy’s Edge, Rise of the Resistance is more of a mystery for those brave enough to venture into Batuu. Panel attendees got a chance to view a bit more from the ride during a Galaxy’s Edge promotional video as the newest park opens its second location. The thrilling clips promise more of an immersive experience as riders come face to face with key villains from the franchise.

Zootopia is one of the new lands coming to Shanghai Disneyland.a

Disney’s Asian parks also got two major updates. Shanghai Disney will have its 8th themed land as Zootopia joins the theme park. In addition to entertainment, dining experiences, and merchandise-the land will be home at least one new attraction that combines the film’s motif with cutting edge technology.

Hong Kong Disney will get a Frozen land based on the blockbuster film. A coaster called Wandering Oaken’s Sliding Sleighs takes riders through a slippery journey across ice and snow. Epcot’s popular Frozen Ever After also comes to the park and should follow the original ride’s design.

READ MORE: Did the California Earthquake Cause Damage at Disneyland?