Graham Sierota, a member of the pop-rock band Echosmith, has apologized for sending inappropriate text messages to Travis Barker’s 13-year-old daughter, according to People.

Graham is the 20-year-old drummer for Echosmith, a family band he shares with his siblings. The kids were born and raised in Los Angeles, California, and they are best known for their hit song “Cool Kids” in 2013.

Echosmith issued a statement saying, “We have never publicly addressed this in the past, but given the events of the last few days, we feel compelled to speak out now to offer some additional context and insight into the unfortunate misunderstandings that occurred and clear up the deeply hurtful mischaracterizations of Graham. As a child, Graham was diagnosed with Autism Spectrum Disorder. He has difficulty understanding social cues.”

The statement continued, “Graham’s challenges have always been a non-issue in our family. In fact, it is a truly beautiful and wonderful thing that makes Graham the amazing brother, son and friend that he is. His outlook on life inspires us every day. He’ll be the first one to say “today is gonna be the best day ever,” or, “you’re my best friend and you look amazing today.” He sees the world as the happiest place, where everyone is a potential friend, and he wants everyone to feel included. One very recent Christmas, we hosted a holiday party at our home, and had athletes, musicians, artists, and models show up, and we were very confused until they happily told us “Graham reached out on social media and invited us!” Anyone who has ever met Graham will agree, he is the friendliest and most kind-hearted, welcoming person in the world.”

Echosmith’s statement added, “We understand that his interactions were misinterpreted and misunderstood in the confusing world of social media, and we are deeply sorry. Graham certainly never meant to make anyone feel uncomfortable. As a family, we will continue to work with him to have the right tools and knowledge about social boundaries, and to better navigate and utilize social media while he takes a break from it. We hope anyone who’s been affected, and in turn felt uncomfortable, can accept our deepest apologies.

1. Graham and His Siblings Formed Echosmith in 2009

#tbt us and our mom, back when our style was very…..interesting.

“#tbt us and our mom, back when our style was very…..interesting,” the kids wrote on Instagram.

According to their Facebook page, Echosmith was formed in 2009 by the Sierota siblings. Sydney is the lead vocalist and plays the keyboard, Noah also does vocals and plays bass, Jamie did vocals and played the guitar, and Graham plays the drums. Jamie has since left the band.

The band has over 2.5 million monthly listeners on Spotify and over 823,000 subscribers on YouTube. The group is best known for their hit song “Cool Kids” off of the album “Talking Dreams” which they released in 2013. The song debuted at number 87 on the Billboard Hot 100 in July 2014 and prompted Jimmy Fallon to dub Echosmith “one of the biggest breakout acts of 2015,” according to their Facebook page.

Echosmith is based in Los Angeles, California, and is signed to Warner Bros. Records. They group says they have, “sold out headlining tours across the U.S. and Europe, and are continuing to win over new converts to their sparkling songs and dynamic live shows.”

According to People, 13-year-old daughter Alabama Barker shared screenshots of direct messages she allegedly received from Graham Sierota on Instagram. Alabama has since deleted the photos.

Alabama’s father, the 43-year-old drummer for Blink-182, was reportedly disgusted by the messages sent from Graham.

“When I found out a 20-year-old man was trying to get in touch with my 13-year-old daughter by filling her Instagram messages with party invites and compliments I was disgusted,” Barker told People. “That’s predatory behavior and there is nothing cool, normal or ok about it at all.”

IT’S @GRAHAMSIEROTA ‘s BIRTHDAY!!! I usually introduce him on stage by saying, “this is the baby of the family and everyone’s favorite (sorry Noah)” and that says it all!! We love you so much graham!!!! Happy 20th ❤️❤️❤️

Graham, who turned 20 on February 5, 2019, tried to clear things up with an explanation.

“I had invited Alabama to my parents’ big family BBQ along with many other people, and it wasn’t until she responded that I realized her age at which point I apologized to her,” Graham told The Blast. “I’m really sorry and feel very badly about this. I didn’t realize she was a minor and assumed she was my age. I made a careless mistake and this is a big lesson for me. I would like to apologize again to Alabama, her dad Travis, and her family.”

Alabama took to Instagram to talk about the situation and ultimately accept Sierota’s apology. 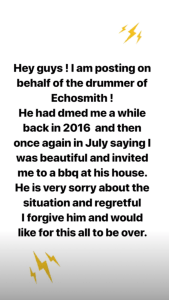 “Hey guys! I am posting on behalf of the drummer of Echosmith! He had dmed me a while back in 2016 and then once again in July saying I was beautiful and invited me to a bbq at his house. He is very sorry about the situation and regretful,” Alabama wrote in a new Instagram story. “I forgive him and would like for this all to be over.”

3. Graham Has Allegedly Contacted Other Young Girls on Social Media

ok soooo today the drummer of echosmith, graham sierota, dmed me. i’m 17 and he’s 19. he also dmed a friend of mine, who was 14 at the time when she first reached out and 15 now. again, he is 19. he has also dmed several other girls at my high school who are, i believe, 16.

Not only did 17-year-old Murphy share screenshots of her interaction with Graham, but she also shared conversations between the drummer and several other young girls. Graham would initiate the conversations with a simple “Hi” and wait for a response. He would ask the girls what they were up to and make sure they knew he was the drummer for Echosmith.

another person i know told me he dmed her asking about her friend: pic.twitter.com/VB6sjKxssz

In one of the photos Murphy posted, Graham can be seen bribing one girl with concert tickets to tell another girl that he thinks she’s beautiful.

he apparently messaged someone AND their 11 year old sister: pic.twitter.com/vr5sQRH8Ef

In another photo, one girl admits Graham messaged her and her 11-year-old sister. The girl would not share screenshots because she didn’t want Graham’s “creepy ass” to “come after” them.

“i’ve just heard that graham sierota also messaged somebody’s 10 year old daughter and then messaged them again when they were 13,” Murphy tweeted on August 1, 2019. “yikes, to say the least.”

4. Graham Recently Had an Appendectomy

Graham has a ruptured appendix :( he’s in a lot of pain, and has been for days. So please be praying for him for a successful surgery, for minimal pain & for a quick recovery ❤️

According to Echosmith’s Instagram, Graham ruptured his appendix on May 13, 2019. The band posted a tender shot of Sydney looking after Graham in the hospital for their 542,000 followers to see. Graham was in the hospital for several days as doctors waited for his body to heal itself before they moved forward.

“Graham has a ruptured appendix :( he’s in a lot of pain, and has been for days,” the band wrote. “So please be praying for him for a successful surgery, for minimal pain & for a quick recovery.”

Graham was sent home and scheduled for surgery at a later date. He shared a sweet message with Echosmith fans on Instagram.

“I just got home from the hospital after a really long and painful week,” the drummer wrote. “I will have to get my appendix taken out in a few months but I’m so glad to be in my own house and with my family. I wanted to thank you all for your prayers and amazing messages! I ❤️ you all!”

Graham had a very successful appendectomy!!! Thanks for all the prayers and love over the past few months since his appendix burst! Time for 2 weeks of chocolate pudding ?❤️

On July 24, 2019, Graham finally had his appendix taken out. The band shared a photo of Graham with his thumbs up.

“Graham had a very successful appendectomy!!!” Echosmith wrote. “Thanks for all the prayers and love over the past few months since his appendix burst! Time for 2 weeks of chocolate pudding.”

Friendly reminder that @grahamsierota from Echosmith is a disgusting bundle of red flags. Only pedophiles try to talk to 13 year old girls. Fucking gross dude. #Echosmith

Cassie took to Twitter to say that Graham Sierota from Echosmith is a “disgusting bundle of red flags,” adding that “only pedophiles try to talk to 13 year old girls.”

I hear you like chatting up children, what's up with that? #echosmith #ephebophilia #pedophilia

“I hear you like chatting up children, what’s up with that?” Catherine Gillies asked the drummer.

Might as well go ahead and shut your Twitter down and fade away, this shit isn't going away anytime soon.

How’s your appendix’s? Still praying you don’t make it.

In a more harsh tone, Donpool87 wrote, “How’s your appendix’s? Still praying you don’t make it.”