Hulu "The Handmaid's Tale" season 3 finale, titled "Mayday," airs next Wednesday at 12:00 a.m. ET. Read on for spoilers and predictions on next week's episode.

The Handmaid’s Tale season 3 finale, titled “Mayday,” premieres Wednesday morning, August 14 at 12:00 a.m. ET/11:00 p.m. CT (Tuesday, August 13). The official description for episode 13 reads: “June must think about how far she’s willing to go. Serena Joy and Commander Waterford think about a new way forward.” A short promo was released following episode 12 that gives viewers a tiny glimpse at what to expect from the finale episode, so read on for episode 13 spoilers.

WARNING: This article will explore spoilers, predictions and possible outcomes for tonight’s finale episode of The Handmaid’s Tale in detail. If you aren’t completely caught up and don’t want anything spoiled for you, this is your MAJOR SPOILER ALERT! Turn back now or proceed at your own risk. I will also be updating this article throughout the day as new promos and clips of the episode are shared by Hulu, so keep checking back for updates!

Episode 12, titled “Sacrifice,” saw a monumental change in June in terms of her regard for human life, and how much Gilead has changed her over the last few years. After brutally killing Commander Winslow and allowing sweet, broken Eleanor Lawrence to overdose in her sleep, it’s clear that June is no longer the same person she was before the war, and she won’t let anything stop her from carrying out her mission to smuggle children out of Gilead. (For a full, detailed recap of episode 12, click here.)

The promo above shows June taking charge of Operation Mayday and putting the final pieces of her plan into action. When Commander Lawrence tries to tell her he is “pulling the plug” on the mission because there are search parties scouring the area, (likely still looking for Commander Winslow), June tells him “you are not in charge. I am,” confirming her new “boss” status within the resistance (Rita called it!).

However, in typical Handmaid’s Tale fashion, nothing just “falls into place” for June or the rest of the resistance in Gilead. Despite the amount of help she has from the Marthas and Billy the airplane pilot (who will be helping fly the children to safety), Joseph was right when he warned June about armed search parties patrolling the area; the promo shows June running through the forest while she is chased by men with guns and flashlights, so June is clearly facing some serious danger in her quest to smuggle the children out.

The real question is, as the synopsis states, how far is June willing to go to carry out her plan? The last few weeks have seen her harden and change in a way audiences hadn’t seen before, despite the many trials and tribulations she’d faced since being captured in season 1. She butchered Commander Winslow with a pen before crushing his skull in with a statue. She allowed a mentally unstable, broken woman to take her own life because it suited her plans. What will she do to Commander Lawrence if he tries to stand in her way?

The clip below, which was just released on The Handmaid’s Tale Hulu Instagram page, also shows another Martha (possibly Beth), throwing a red piece of cloth from the iconic handmaid’s dress over a lamp that is strategically set in the window. It appears to be a sign, probably to indicate to the other Marthas that Mayday is still a “go” and to continue making plans to get the children to safety.

The promo doesn’t give away much, which is typical for season finale trailers. The showrunners don’t want to ruin everything for you before the episode airs, but Hulu usually releases another clip or two throughout the week leading up to the next episode, so we will release another, more detailed and in-depth spoilers article before “Mayday” airs next Wednesday.

So what else can we expect from next week’s finale episode? We have a couple of theories on what might go down, and some of the cast and crew have given away a few sly hints at what to expect for the finale over the last few weeks. When asked about what’s viewers can expect from the season 3 finale, Elisabeth Moss, who plays June, told Extra TV that “there’s a cost for even winning,” so we can likely expect to see some casualties and/or fallout from her bold plan to smuggle 52 children out of Gilead.

This photo was also shared by director Mike Barker, who directed “Mayday,” and several other episodes throughout the series, so it looks like there will be at least one happy memory/flashback involving June’s family before the war. The photo shows June and Hannah on a merry-go-round at a park while Luke sits next to them on the grass.

This Reddit thread also shared several pictures from what we assume is the finale while the season was still being filmed. The pictures show dozens of children boarding a plane, so we might at least get to see some of the children make it out safely. However, as the promo shows, June runs into some armed patrol guards either on her way to the plane or leaving, so it’s not clear at this time if the children actually make it out of Gilead or not.

According to MamaMia, in a (now deleted) interview earlier this year, actress Amanda Brugal, who plays Rita, said her character meets Luke in the finale, so if that’s true, then we know Rita escapes to Canada. Whether it’s with the children on the plane or through some other unexpected way remains to be seen.

Also, according to Post Apocalyptic Media, Adam Taylor, who is in charge of music for The Handmaid’s Tale, posted a photo from the finale last month. Readers shared it on r/coconutsandtreason, a subreddit for people discussing major spoilers from the show. The photo shows a handmaid (as indicated by her wings) holding the hand of a smaller figure, who some fans believe might either be her daughter Hannah or another child who June is trying to help escape Gilead. 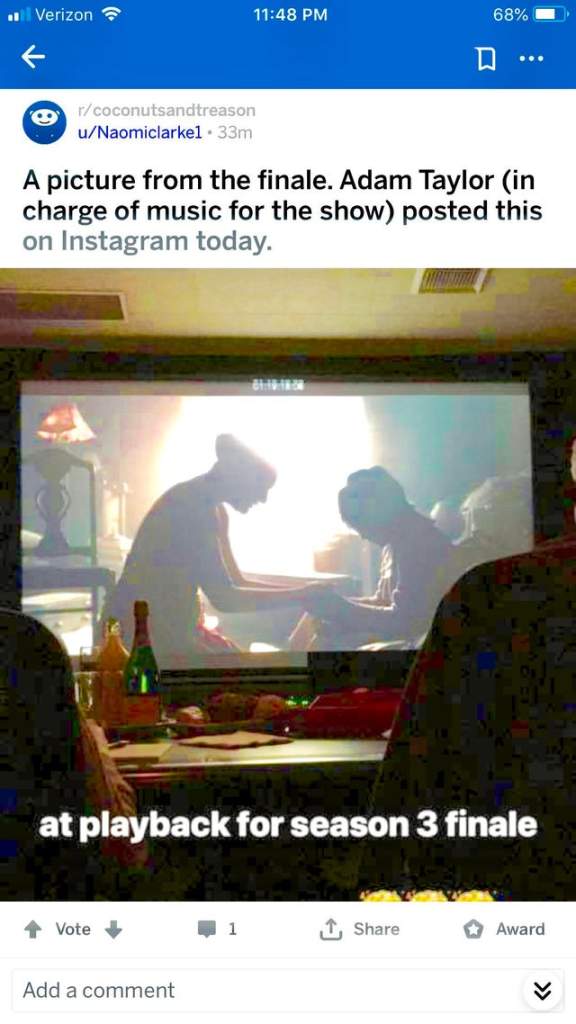 It’s not clear if the handmaid pictured is even June, but Reddit users believe that the smaller figure is definitely a child, so fans are hoping June might finally be reunited with Hannah during episode 13. However, the photo is too dark, blurry and backlit to know for sure who is pictured, so fans will just have to wait and find out by tuning in next Wednesday, August 14 at 12:00 a.m. ET (Tuesday, August 13 at 11:00 p.m. CT) to catch the season 3 finale of the The Handmaid’s Tale.

READ NEXT: Who Died on The Handmaid’s Tale Tonight? Season 3 Episode 12 Spoilers