Ian Ziering is back for the 90210 reboot. The actor has been making waves over the past decade due to his Sharknado films, but he will be returning to the role that made him famous, cocky rich kid Steve. This full circle journey has led many to question how old Ziering is, and how long he’s been a Hollywood regular.

According to Famous Birthdays, Ziering is 55 years old. He was born on March 30, 1964 in New Jersey, where he attended West Orange High School. He decided to pursue a career in acting while there, and made his screen debut in the 1981 romance film Endless Love. He was 17. Ziering continued to act and land small roles on shows like Guiding Light and Married… with Children, but it wasn’t until he landed Beverly Hills, 90210 in 1990 that he became a household name.

When time folds in half and you get to experience things you’ve experienced once before. #BH90210

Ziering stayed on for the show’s ten seasons, and he even directed the episode “I’m Using You ‘Cause I Like You.” He later reprised his 90210 character on the spinoff Melrose Place. In 2011, when he was 47, the actor landed the role of Finn in the first Sharknado film, which proved to be a career boost. He has since starred in four sequels, with the most recent being Sharknado 5: Global Warming.

During an interview with Oakland County Moms, the actor discussed how things like family and age have rearranged his priorities. “You know, when I was young, I was motivated by glory. As I got older, I was motivated by accomplishment,” he said. “I look at myself really not just as an actor, but as an entertainer. But, mostly now I look at myself as a dad. Out of all the things I’ve done in my career, I think the biggest accomplishment in my life are my children, Mia and Penna. It’s the best.”

In a separate discussion with the Hollywood Reporter, Ziering talked about his tenure as a Chippendales dancer, and how Sharknado allowed him to pursue different career avenues. “I like the fact that I’m involved in a career that gives me so many different mediums to perform in. The entertainment industry in the last 10 years has been so fragmented, from scripted programming to reality,” he said. “There’s work not just on TV and in film, but you know, on your cell phone, on the Internet. There’s so many [venues] now, and each of them looking for quality content, that, you know, I’m just going with the flow. And I’m having fun with every wave.”

IMDb reports that Ziering is 6’0″, which makes him taller than most of his 90210 co-stars. For comparison, Jason Priestly is 5’8″ and the late Luke Perry was 5’10”. Ziering is the same height as David Austen Green, who will also be returning for the new season. 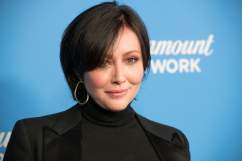