Isabel Lucas, a 34-year-old Australian actress and environmentalist, is said to be comforting longtime friend Liam Hemsworth after his split from wife Miley Cyrus, according to Mirror.

The beautiful blonde actress has appeared in dozens of TV series and movies, as well as commercials and magazines. In addition, Lucas travels the world to call attention to environmental issues, according to her Instagram page, where she entertains almost 150,000 followers.

1. Isabel Was Raised on Aboriginal Land in Australia

Celebrating #NAIDOC ?? ?? #respect #indigenous #culture Had I not lived in Kakadu National Park in 1994 I wouldn't have met my childhood bestie Natasha Nadji.. Tasha taught me what bush food we could eat, what grasses we could drink water of, what plant medicines there were in the wild, how to navigate which waters were safe to swim in (aka safe from crocodiles) … knowing Tasha gave me glimpses into the rich history & magic of Aboriginal culture. In honour of Tasha & indigenous cultures, acknowledging NAIDOC week in Australia. ??❤️ NAIDOC originally stood for 'National Aborigines & Islanders Day Observance Committee'. NAIDOC Week celebrates the achievements & culture of Aboriginal and Torres Strait Islander people.

According to IMDb, Lucas was born on January 29, 1985, in Melbourne, Victoria, Australia. Her father was a farmer-turned pilot while her mother worked with autistic children. When Isabel was a young girl, her family reportedly moved to a very small mining town in the Northern Territory with a population of approximately 1,000 people.

Isabel and her sister attended the Jabiru Area School, which educated both white and Aboriginal children. Australian Aboriginal peoples are one of the two distinct groups of Indigenous peoples of Australia. In fact, Lucas’ childhood best friend was Aboriginal.

“Had I not lived in Kakadu National Park in 1994 I wouldn’t have met my childhood bestie Natasha Nadji..” Lucas wrote on Instagram. “Tasha taught me what bush food we could eat, what grasses we could drink water of, what plant medicines there were in the wild, how to navigate which waters were safe to swim in (aka safe from crocodiles) … knowing Tasha gave me glimpses into the rich history & magic of Aboriginal culture.”

Lucas went on to study drama at the Victorian College of Arts and Queensland University of Technology, according to her bio. The 34-year-old has since become a very successful actress and model.

2. Isabell Started Acting When She Was a Teenager

‘In Like Flynn’ now released in selected US cinemas & for sale on DVD in Australia February 6. #InLikeFlynn #ErrolFlynn ⚓️

According to IMDb, after graduating with a degree in drama, Isabel did not audition for any roles until she was discovered by her agent in 2002. Shortly thereafter, at the age of 18, Isabel landed her first role, playing Tasha Andrews in 259 episodes of the TV series Home and Away from 2003 to 2006.

Lucas has since gone on to rack up 27 acting credits. Her breakout role came in 2009 when she played Alice in “Transformers: Revenge of the Fallen.” Lucas made headlines after she was involved in a car crash with the movie’s star Shia Lebouf, according to news.com.au. She made it out with minor injuries and went back to work while Lebouf underwent surgery.

Lucas is best known for her roles in several popular TV series and movies including “Daybreakers,” “Immortals,” “Red Dawn,” and “Careful What You Wish For,” among others.

3. Isabell is an Environmentalist and Animal Lover

Kili! Every night before supper, we met for mini summits to further inform ourselves about the #globalcleanwatercrisis from our fellow camper water experts. Obviously this is effecting us globally, every 20 seconds a child dies from a water born disease, 780 million people live without clean drinking water. The impacts are overwhelming, but the Summit on the Summit movement has since been able to support organizations and help bring clean water to the more than 1 billion people living without this basic human right and continues seeking out new heights to resolve the global clean water crisis. Massive respect @okkenna….. keep inspiring. #kudos to my rad-ass tent buddy & heart of gold @santigold – for her first camping mission! Big love Kili climbers! ? Check out our documented mtv Summit on the Summit journey. #globalcleanwatercrisis #kilimanjaro #trek #mission #tanzania #africa #2010 #gratefulmemories #tb

Lucas’ Instagram page catalogues her life as an environmentalist and animal lover. According to a 2011 interview with Interview Magazine, Lucas worked as a community volunteer in Namibia for two months. Then, she made international news when she joined a wet-suited Hayden Panettiere and about 30 surfers in the water off the coast of Japan to protest dolphin hunting in 2007. In addition, she hiked Mount Kilimanjaro with Elizabeth Gore, Jessica Biel, Alexandra Cousteau, and Lupe Fiasco to raise awareness about the global clean water crisis in 2010.

“We don’t have the luxury of being discouraged.” – Al Gore Over the past few days I had the opportunity to attend the Climate Reality Leadership Training, the 41st of its kind. Since Al Gore's US Vice Presidency he has devoted his life to climate change and almost 20,000 people have benefitted from the training. We need to listen to the recorded 99% of scientists that have proven evidence of the effects climate change, and listen to the over 100,000 school students (in Australia alone) who are urging leaders to transition from fossil fuels to renewable energy now. It’s been an emotional journey, my mind is still processing the unimaginable projections but hopeful solutions. I’m enormously grateful to be part of a groundswell community to carry the message out to the world. Thank you @algore & everyone at @climatereality for your tenacity, passion & leadership. #AlGore #climatereality #climatechange #renewableenergy #leadonclimate

Lucas has traveled the world in an effort to make it a cleaner, healthier place. She has met with other activists, scientists, and politicians. According to her Instagram, Lucas attended the 41st Climate Reality Leadership Training in June 2019 and met with former U.S. vice president Al Gore, who has devoted his life to climate change.

More recently, Lucas has aligned herself with those at Mauna Kea in Hawaii safeguarding the sacred ‘āina from scientific imperialism. Sending her blessings and power to the area, Lucas says she stands in solidarity with the indigenous lands and people. 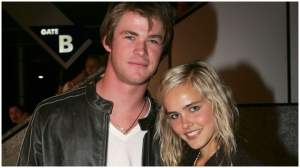 According to Mirror, Liam Hemsworth has known Isabel for a long time, as she is the ex-girlfriend of his older brother Chris. Isabel and Chris reportedly met after co-starring on “Home And Away.” Chris played the role of Kim Hyde in 192 episodes from 2004 to 2007, according to IMDb. The two were together for three years from 2005 until 2008.

Now, Chris’ younger brother Liam has reportedly turned to Isabel for support after his highly-publicized split from wife Miley Cyrus. According to Inquisitr, sources say that Liam’s family hopes to see a relationship spark between the two.

“Liam’s parents would love to see him settle down with someone who’s more on the same page as him… Isabel ticks a lot of those boxes,” an insider said. “Chris would be thrilled if Liam dated someone as lovely as Isabel.”

5. It Is Unclear Whether or Not Isabel Is Single

Got to laugh at Daily Mail article.
Isabel Lucas comforting Liam Hemsworth….I don't think so. Isabel is exploring the Alps in Switzerland with her boyfriend since early July!

While Liam’s family hopes to see him with Isabel in the near future, it is unclear whether or not the actress is already in a relationship. One Twitter user said she’s “got to laugh” at a Daily Mail article suggesting Isabel is comforting Liam. The outlet reports that Isabel is in communication with Liam via text while she is on vacation with a male companion.

“I don’t think so,” Julie wrote. “Isabel is exploring the Alps in Switzerland with her boyfriend since early July!”

Home again, in the Swiss mountains??

Isabel’s Instagram has indeed been updated with photos from her trip to Switzerland. In one photo, the actress can be seen walking in front of a man. Unfortunately, her travel companion has not been tagged in any of the photos.