Jason Priestley is back for the 90210 reboot. The actor will play the show’s virtuous hero for the first time in decades, which has led many to wonder about his age, and how long he’s been in show business. According to Famous Birthdays, Priestley is 49 years old. He was born on August 28, 1969 in North Vancouver, Canada.

Priestley started his acting career by doing television commercials and guest spots on television. He made his official screen debut during the fourth and final season of Airwolf in 1987, when he was 18. He continued to pop up on shows like 21 Jump Street and Sister Kate, but it wasn’t until he landed the lead role in Beverly Hills, 90210 in 1990 that he became a global star. Priestley stayed on for eight of 90210‘s ten seasons, during which time he was nominated for two Golden Globes and directed 15 episodes.

Priestley has talked about his unceremonious exit from 90210, and how it was a reflection of his immaturity at the time. “When I look back, I am surprised I made it out. It was hard, being a young man in LA … I never had the temerity to consider that [level of fame] was a possibility,” he told the Guardian. “Nobody would expect that; you’d be an idiot to expect that. When I left the show, it was so anticlimactic, it just left a bad taste in my mouth.”

“It was the fourth episode of the ninth season. I did the first scene of the morning – literally with this actor who was brought in to replace me – and that was it,” he continued. “I hugged the crew, picked up my box of stuff, went to my car and drove away. There was no party, no nothing. I felt like I’d wasted nine years of my life.” Priestley also talked about some of his reckless behavior at the time, including a 2002 car accident that nearly killed him.

Priestley Nearly Died In a Car Accident In 2002

Look who’s on the cover of @TVGuideMagazine. Been a long time since these guys have been on a cover together! @bh90210 #BH90210

“It’s a much more dangerous world for a young famous person now, it’s mayhem. You can understand why so many of them have bodyguards,” he explained. “That’s not my problem – that’s [Justin] Bieber’s problem. I’m [49] years old, happily married with two beautiful kids. Thank God it’s not my problem!” As far as his near-fatal car accident is concerned, the actor has made peace with it. “A thing like that has to change you in some way,” he admits. “If it doesn’t, I think there’s something wrong with you.”

According to Celebrity Facts, Priestley is 5’9″, which makes him shorter than some of his male 90210 co-stars. The late Luke Perry stood at 5’10”, while both Ian Ziering and David Austen Green are 6’0″. That said, Priestley is taller than his female co-stars Shannen Doherty and Jenni Garth. 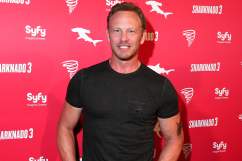 Read More
FOX
Jason Priestley is back for the '90210' reboot. Find out how old and tall the actor is ahead of the premiere.