Jennie Garth is one of many cast members returning for the 90210 reboot. She will be reprising her role as the tortured Kelly, and given the character’s beloved status, many fans are wondering about Garth’s age and how long she’s been a Hollywood mainstay.

According to Famous Birthdays, Garth is 47 years old. She was born on April 3, 1972 in Urbana, Illinois. She dreamt of being an actress from an early age, and was discovered by a talent agent when she was only 13. She made her screen debut on a 1989 episode of Growing Pains, and followed it up with a recurring stint on the sitcom Brand New Life. Garth found stardom less than a year later when she was cast on Beverly Hills, 90210. She was 17.

Garth appeared in all ten seasons of Beverly Hills, 90210. She directed two episodes, which was the second most of any cast member, and she won a Young Artist Award in 1992. She was also a big part of the spin-offs Melrose Place and 90210, and is the actor who has appeared in the most episodes across the franchise. Garth has frequently discussed the reboot and how age has allowed her and the rest of the cast to look fondly upon their time together.

“It’s something that has been out there for many years. People always asking ‘When are you going to do a reboot [or] where are we going to see you all together again?’ Timing has just never been right,” she told PopCulture.com. “I think that we probably are taking the opportunity to be together again and realize how meaningful the show was to each of us and to all people who watched it. We want to celebrate that and be together again.”

“It’s like no time has passed. Our relationships are each individually unique and separate from the others,” Garth continued. “Then there’s this big group chemistry that is really, really hard to find in another group of actors,” she said. “Now, each of us having gone out and worked independently and done various different projects over the years, we realize [Beverly Hills, 90210] was like lightning in a bottle. Now, coming back together, we all realize that and it’s a good thing to have people who appreciate each other and want to be together. We’re very lucky.”

Garth also spoke on the passing of Luke Perry, and how his death brought the rest of the cast closer together. “The timing was something that seemed horrific, but in a weird sort of universal way,” she told Today. “It was a way for us to all be together during (an) incomprehensible painful time. I think that was really good for all of us, actually. And he was with us every second of the time.”

Healthy Celeb reports that Garth is 5’5″, which places her firmly in the middle of the rest of her 90210 co-stars. She is taller than Shannen Doherty, but shorter than Tori Spelling, who is 5’6″, and Jason Priestley, who stands at 5’9″. 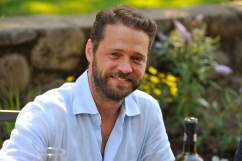 Read More
FOX, Jennie Garth
Jennie Garth is ready to rejoin the '90210' cast. Find out about her age and how tall she is compared to her co-stars.