Tonight’s episode of Bachelor in Paradise promises to continue last week’s drama between Christian Estrada and Jordan Kimball, who got into a fight when Jordan interrupted Christian’s date with Nicole and tore down his pinata. Unfortunately, another contestant also decides to eliminate herself during tonight’s rose ceremony, claiming she hasn’t made a solid connection with any of the other singles in paradise.

Read on for spoilers on this week’s back-to-back episodes, but first, this is your MAJOR BIP SPOILER WARNING! If you don’t want anything ruined for you, turn back now, or proceed at your own risk.

The BIP plot synopsis for tonight’s episode states, “One disheartened woman decides to make an early exit; Hannah G. must choose between Blake and Dylan; a woman uncovers an embarrassing secret.” Tuesday’s episode 6 description also reads, “Demi tells Chris how conflicted she feels; a new arrival has her designs on Chris; Demi reconnects with the woman she left behind.”

It's a #BachelorInParadise moment no one saw coming. The drama gets out of control tonight and tomorrow at 8|7c!

Fans will get to see the aftermath of Christian and Jordan’s fight tonight, which quickly escalates into a physical altercation. After the fight is broken up and both Jordan and Christian are given a chance to cool down, they are both sent home and aren’t allowed to attend the rose ceremony, so it looks like Nicole’s decision on who to give a rose to gets narrowed down for her.

Cam Ayala, Kevin Fortenberry, and Wills Reid are also sent packing during the rose ceremony after none of them receive roses from the remaining ladies. Sadly, one disappointed star eliminates herself instead of giving out a rose, according to “Bachelor Nation” blogger Reality Steve. Onyeka Ehie decides that she hasn’t connected with any of the men on the island, so she decides to send herself home instead of giving the remaining men another shot.

“Onyeka ended up not giving out her rose,” Reality Steve writes in his episode-by-episode spoilers. “Said she didn’t find a connection so she ends up leaving.” 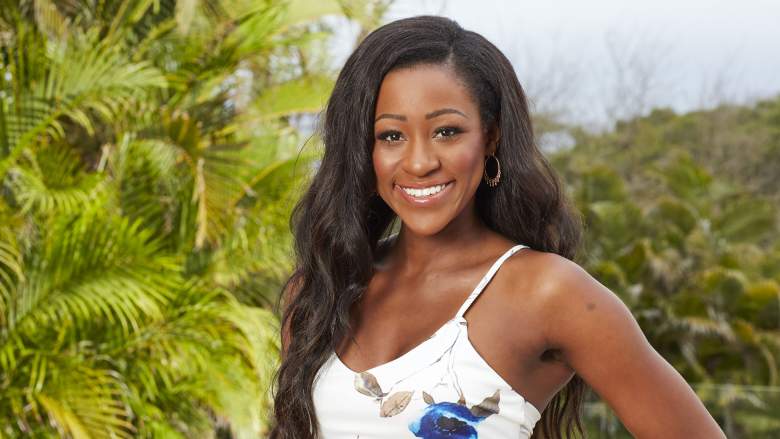 Fans will remember Onyeka from Colton Underwood’s season of The Bachelor. The reality star was eliminated during episode 6 after she and fellow Bachelor and BIP co-star Nicole Lopez-Alvar wouldn’t stop bickering about whether or not Nicole was there for the right reasons. Onyeka had told Underwood that Nicole was only on the show to “get out of Miami,” and called Nicole “mentally unstable” due to how often she cries.

In an Instagram post shared after she was eliminated from the show, Ehie wrote “This is your daily reminder to love yourself even when others don’t. It’s only a small glimpse that you all see on TV and even though you think you have it all figured out..trust me, you don’t. I truly believe that everyone is entitled to their own opinion, but that’s all it is….an opinion. I’m going to continue living my BEST life which consists of me only caring about opinions from people who actually know me as a person.”

Tune in Monday and Tuesday nights at 8/7c on ABC to catch the newest season of Bachelor in Paradise, which airs for the rest of the summer.

READ NEXT: Who Gets Into Fights on ‘Bachelor in Paradise’ This Week?

Read More
Bachelor In Paradise, Reality TV, TV
One disheartened contestant eliminates herself during this week's rose ceremony on Bachelor in Paradise. So who packs up and heads home? Read on for spoilers.