Ryan Serhant is back for the new season of Million Dollar Listing New York. The real estate agent has been a force on the series over the past few seasons, as well as his own spin-off, Sell It Like Serhant. Given his popularity, some fans may be wondering how old Serhant is, and how long he’s been in the business.

According to Celeb Siren, Serhant is 35 years old. He was born on July 2, 1984 in Houston, Texas. He attended Hamilton College in Massachusetts, where he double majored in English Literature and Theatre and was a member of the Delta Kappa Epsilon fraternity. After graduating in 2006, he moved to New York City to launch his acting career. It wasn’t until 2008 that Serhant decided to put his passion for acting on the back burner, however, and pursue a career in real estate. He was 24.

In 2012, Serhant made his television debut alongside Fredrik Eklund and Michael Lorber on Million Dollar Listing New York. He talked to the Hedonist Magazine about the fame the show has brought him, and how it’s allowed him to bridge his two passions of acting and real estate. “I spent a lot of time of my life doing theater and acting classes while becoming different characters. When you study acting you are not just memorizing lines,” he explained.

“One day you become a dog, the next day you born again and so on,” Serhant continued. “It really teaches you to listen, it teaches you to be a very open person and in real estate, if you want to be successful you have to be able to connect with you and with others. I have to become whoever I need to be in order to sell ‘that product’. Believe me, for the first three years in the business I didn’t take a single day off, no holidays, no weekends, no nothing. It sucked the worst but I think that for entrepreneurship and especially real estate agents where it’s all commission based, you have to put in the time now that others won’t, so later on you can live the life that others can’t.”

When asked about the upcoming season, Serhant told AOL that it was more “stressful” than usual. “It’s going to be awful. We started filming in August last year. The market is bad in New York, but it was really bad in August, and it tanked in December,” he admitted. “Everyone thought the end of the world was coming, and it was really stressful. Deals were falling apart left and right, buyers were pulling out and developers were trying to come after us.”

Heightline reports that Serhant is 6’3″. This makes him taller than his Million Dollar Listing co-star Steve Gold, who is 6’1″, but shorter than Fredrik Eklund, who stands at an impressive 6’5″. 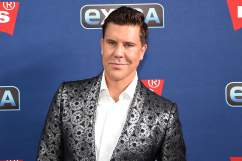 Fredrik Eklund Age & Height: How Old & Tall Is He?