Shannen Doherty is back for the 90210 reboot. The actress and producer has been a cultural force for the past few decades, starring in seminal shows like the original 90210 and Charmed. Given her lengthy career, some fans may be curious as to how old the actress is, and how long she’s been performing.

According to Healthy Celeb, Doherty is 48 years old. She was born on April 12, 1971 in Memphis, Tennessee. She pursued acting from an early age, and made her screen debut on an episode of the science fiction serial Voyager! She then landed a recurring part on the popular western series Father Murphy when she was 11. She stayed on the series until its cancellation two years later.

Doherty continued to land prominent roles as a teenager, most notably in the animated film The Secret of NIMH and the cult black comedy Heathers, but her biggest success came when she was cast on Beverly Hills, 90210 in 1990. She was 19. The show made her a superstar, and earned several award nominations, until her volatile behavior led to her being written off in 1994. Doherty landed another iconic series in 1998 when she was cast in Charmed. The series was a ratings smash from its first season, but once again, the friction she had with her co-stars led to her being let go prematurely. Her character was written off in 2001.

The actress was hit with a health scare in 2015, when she was diagnosed with breast cancer. She went into remission a year later, when she talked to E! News about her shifting outlook on life. “Cancer has, in a strange way, done some amazing things for me,” she said. “It’s allowed me to be more me, like much more in touch with who I am, and much more vulnerable and the person that I always was, but I think it got hidden behind a lot of stuff.”

This is a true #tbt. #beverlyhills90210 is to this day the biggest tv show of its kind I worked on. A true iconic show that reached and touched not only young people, but bridged the gap to their parents. I'm very proud of this show. @jason_priestley #brendawalsh #twins

She also spoke on her age, and how time has given her a more measured perspective on her 90210 character, given that she initially turned the reboot down. “I was kind of like, Why would I play Brenda Walsh again? There was an ‘I hate Brenda’ newsletter,” she explained. “Why would I possible get myself back into that? I think it was too scary for me. I didn’t want to go back to people hating me…. It [then] hit me that this is what the fans wanted. They put a roof over my head… The only reason I survive is because of them. If there’s one way to possibly say thank you, it is to go back and play a character that you never even liked yourself.

According to Compare Celeb, Doherty is 5’3″. This makes her shorter than many of her 90210 co-stars, including Tori Spelling, who is 5’6″, and Jenni Garth, who is 5’5″.  She is taller than Gabrielle Carteris, who stands at 5’1″, and who is also slated to return for the new season. 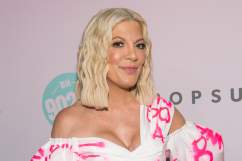