Getty Taylor Swift and her mother Andrea in 2015.

Taylor Swift is set to release her new album Lover. She’s said that it’s her best body of work yet, and singled out one song in particular for being one of her most personal compositions. She told Entertainment Weekly that the song “Soon You’ll Get Better” is dedicated to her mother Andrea Swift and her battle with cancer. Read on to learn more about Swift and her relationship with her mother.

Swift said that “Soon You’ll Get Better” was “really, really hard to write,” and there was a family discussion as to whether a song that intimate should find a place on the album. “We as a family decided to put this on the album, it’s something that I am so proud of,” she said. The lyrics to the song were uploaded by Genius, but they’ve since been taken down.

Andrea, 61, was first diagnosed with cancer in April 2015. Swift broke the news on her Tumblr, where she wrote, “The results came in, and I’m saddened to tell you that my mom has been diagnosed with cancer.” Swift stayed mostly quiet about her mother’s health after the post, and never definitively told fans that she was in remission. She broached the subject a second time in a piece she wrote for Elle Magazine in March 2019.

When asked about the biggest concerns in her life, the pop star revealed that her mother’s cancer had returned. “I’ve had to learn how to handle serious illness in my family. Both of my parents have had cancer, and my mom is now fighting her battle with it again,” she wrote. “It’s taught me that there are real problems and then there’s everything else. My mom’s cancer is a real problem. I used to be so anxious about daily ups and downs. I give all of my worry, stress, and prayers to real problems now.”

Andrea Swift Was Previously Diagnosed with Cancer In April 2015

Swift credits her mother with helping shape her music career. As she recounted in a 2008 interview, Andrea would drive her to Nashville concerts when she was a girl, so that she could hand out cassette tapes of her songs. “My mom waited in the car with my little brother while I knocked on doors up and down Music Row,” Swift recalled. “I would say, ‘Hi, I’m Taylor. I’m 11; I want a record deal. Call me.”‘

Andrea also talked about her daughter and how her commitment to music always impressed her. “At 12, she saw a 12-string guitar and thought it was the coolest thing. And of course we immediately said, ‘Oh no, absolutely not, your fingers are too small—not till you’re much older will you be able to play the 12-string guitar’,” she revealed. “Well, that was all it took. Don’t ever say never or can’t do to Taylor. She started playing it four hours a day—six on the weekends. She would get calluses on her fingers and they would crack and bleed, and we would tape them up and she’d just keep on playing.”

When asked about her daughter’s success, Andrea said that she’s most proud of the fact that she’s doing what she loves. “For her, the happiest I ever see her is just after she’s written a killer song. As a parent, I felt really good about that,” she explained. “If that’s where she draws happiness from, she’ll have that the rest of her life. She’s not always gonna have the awards, or the attention, or the celebrity, but she will always have the ability to write a song.” 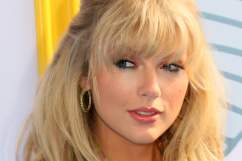 Read More
Music, Taylor Swift
Taylor Swift has dedicated a song on her new album to her mother Andrea. Learn more about her mother here.