The Comedy Central Roast of Alec Baldwin airs on Paramount, Nickelodeon, CMT, VH1, Comedy Central MTV, and TV Land, premiering tonight, on September 15, 2019, at 10 p.m. ET/PT and 9 p.m. CT. Baldwin’s roast has drawn in some major names appearing on stage and poking fun at the award-winning star. Read on below for the rundown on the panel of stars participating, along with surprise guests, the Roast Master, and some quotes from the show.

Let’s get started with the host of the show, also known as the Roast Master. Sean Hayes, who many know from his role as “Jack” on Will & Grace, is the host. According to Deadline, when talking about his hosting gig, Hayes joked, “It’s always been my dream to roast a Hollywood legend, so when they asked me to roast Alec Baldwin I said ‘close enough’.”

When it comes to surprise guests, Paul Anka was shown appearing on stage, possibly singing, and Baldwin’s daughter, Ireland, popped in to throw some jabs at her dad on stage.

Ahead of the roast, Alec Baldwin jokingly stated, “Getting roasted will be the greatest honor of my lifetime besides being a father, a husband, hosting SNL seventeen times, receiving Golden Globes, Emmys, and working with Martin Scorsese.” 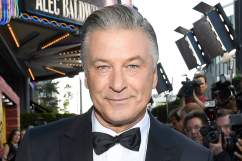 Now let’s get into the panel of celebrities taking their seat on stage with Baldwin. One of the major stars who is on the dais for Baldwin’s roast is Robert DeNiro. Jonas Larsen, a Comedy Central big wig, told Vanity Fair that when it came to having DeNiro on the panel for the roast, “It was a dream come true to have him there. But for him to then also really take it seriously … I mean, he worked with his writer for weeks. He practiced his set; he studied it down to his facial expressions … He’s a consummate pro. He killed.”

Additional stars in the lineup include Blake Griffin, Caitlyn Jenner, Joel McHale, Chris Redd, Jeff Ross, Nikki Glaser, Caroline Rhea, Ken Jeong, and Adam Carolla. Actress Debra Messing was originally announced as a member of the panel, but she backed out, according to The Daily Beast. Messing’s publicist said that the actress had to cancel because she “had a schedule change” and added that, “She adores Alec and is so sad to miss it.”

Some of the best quotes from the roast are:

“It’s not easy to be the daughter of an iconic movie star. But I’m not here to talk about my mom and her Oscar.” – Ireland Baldwin

“It’s good to see all the diversity on the stage. We have gay, trans, black, Asian, mixed … I don’t know whether to roast these people or register them to vote.” – Sean Hayes

“I watched you get arrested for pummeling a guy over a parking space. Next time, why don’t you just valet your car and help out your brother’s business?” – Jeff Ross

“A lot of people only know my dad as an angry guy, but he’s more than some lunatic who loses his temper. He also loses Emmys and Oscars and custody of his first-born child, am I right?” – Ireland Baldwin

“Alec, you weren’t the star of 30 Rock, and with De Niro here, you’re not even the star of your own roast.” – Ken Jeong

“I have to mention Alec’s great portrayal of Donald Trump on SNL. He fucking nails it, exposing Trump for the ridiculous, malignant, narcissist bully sociopath he is … It’s not fair, though, because Alec doesn’t even have to act to do that.” – Robert DeNiro

READ NEXT: How to Watch the Alec Baldwin Roast Online