The Alec Baldwin Roast airs tonight, with a dais made up of big stars, athletes, and comedians. The special is airing on multiple networks and will broadcast at several times, and have encore presentations on additional dates. Read on for a rundown on the show schedule, in addition to information on the cast lineup, the Roast Master, and more.

ALEC BALDWIN ROAST TIME: The Alec Baldwin Roast will make its debut, airing at 10 p.m. ET/PT and 9 p.m. CT, on the above networks.

ALEC BALDWIN ROAST DATES & SCHEDULE: In addition to the 10 p.m. ET/PT and 9 p.m. CT premiere time, there are additional showings, on multiple networks. They include:

HOW TO WATCH THE ALEC BALDWIN ROAST ONLINE: If you do not have a cable subscription or your cable package does not include any of the channels featuring the roast, you can still watch the event special online. Find here the instructions on how to watch the roast online.

ALEC BALDWIN ROAST DAIS: According to the Comedy Central Press, the stars participating in the roast, on the dais, include Robert De Niro, Blake Griffin, Caitlyn Jenner, Joel McHale, Chris Redd, and Jeff Ross. Additional stars and comedians on the panel are Nikki Glaser, Caroline Rhea, Ken Jeong, and Adam Carolla. Initially, Debra Messing was reported to be a part of the panel, but she backed out.

ALEC BALDWIN ROAST MASTER & HOST: Sean Hayes, who many know as “Jack” on Will & Grace, is the host of the show. The host is generally referred to as the Roast Master.

When it comes to what goes into consideration when creating a roast, according to Jonas Larsen, Comedy Central’s co-head of original content, said to Vanity Fair that the way they choose people to roast is if, “They’ve had a really, really long and fruitful career—but they also have had some public issues, potentially, or there’s good material on them.” As for choosing Baldwin to roast, Larsen said, “he’s also had some very public run-ins with paparazzi, and law, and American Airlines, and so on. You know that you have some great jokes already.”

In preparation for the roast, Larsen said that he and co-workers got phone calls directly from Baldwin when putting together the show. Larsen revealed, “You get an anonymous number call, and it’s Alec Baldwin and he has a couple of questions for you. He just deals with people directly like that, which is very uncommon, I think, for certainly a star of his stature. It became a little bit, especially around Comedy Central—kind of a fun thing. Like, ‘I got a call from Alec Baldwin.’ ‘He called me!’ It was just fun.” 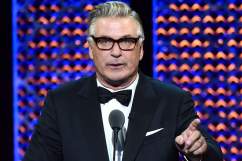 Alec Baldwin Roast: How to Watch It Online