Pennywise is one of the most iconic monsters of all time. The otherworldly clown has terrorized generations of fans, and with IT: Chapter 2 how in theaters, they will get to see his destruction on the big screen. But how does Pennywise die? How do the members of the Losers Club manage to overpower and kill him?

Beware of spoilers below and STOP READING if you do not want to know what happens to Pennywise in IT: Chapter 2.

Well, it’s a complicated answer. In the original Stephen King novel, Pennywise is an alien creature who has survived in Derry for millions of years. He is a force of darkness who is balanced out by the light of Maturin, the space turtle. It is Maturin who contacts Bill, the leader of the Losers Club, and tells him that he must execute the Ritual of Chud if he wants to destroy Pennywise.

The Ritual of Chud is basically a psychic battle of wills. In the novel, Pennywise and a member of the Losers Club each extend their tongues, overlap them, bite down, and then exchange jokes until one party laughs. In both the novel and the film, however, the Losers Club overpower the clown by ignoring their fear of him. The silver they pelt him with doesn’t cause damage, but because the Losers believe it does, silver becomes an effective weapon.

Grab your Losers and go see IT this Thursday, only in theaters. #LosersStickTogether Get tickets at the link in bio.

Pennywise reverts to his natural form as a gigantic, Lovecraftian creature, but in doing so, he exposes his “deadlights,” which are described as an “eldritch form of energy that originated from the preternatural dimension known as the Macroverse.” Viewers caught a glimpse of the deadlights in IT: Chapter 1, when Pennywise opened his jaw and showed Beverly the sparkling entities within his body. Once the Losers Club extinguish the deadlights, Pennywise loses his life force and ceases to exist.

Maturin did not appear in IT: Chapter 1, nor did the Ritual of Chud. That said screenwriter Gary Dauberman has confirmed that both will appear in some form during Chapter 2. “The Ritual of Chüd is challenging, but it’s such an important component to the book that we had to address it,” he told Cinemablend. “That stuff is difficult to balance, but because [director Andy Muschietti, producer Barbara Muschietti and I] worked with each other before, when I’m writing pages and all that stuff it becomes more of a conversation and less like, ‘Hey, here’s what I did.'”

“It’s sort of organic; it’s really kind of just chipping away at the stone and trying to find the most focused, accessible way into some of more metaphysical aspects of that book,” Dauberman added. “I think that’s something that Andy gave a lot of thought about.. I’m writing that stuff, and Andy would kind of go off and think about Chüd and how he wants to visually represent all that stuff. He just came up with some brilliant, brilliant stuff… It really is going to be amazing.”

Despite being killed in IT: Chapter 2, the director has teased the possibility of a third Pennywise film. “There is a whole mythology to the book though. Mythology is something that always has opportunities to explore,” he told io9. “IT [aka Pennywise] has been on Earth for millions of years. He’s been in contact with humans for hundreds of years, every 27 years. So you can imagine the amount of material. It’s always exciting to think of eventually exploring this mythology. It’s very exciting. But, for now, there’s nothing on the table.” 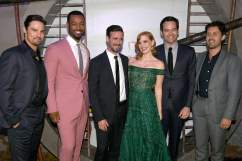 ‘IT: Chapter 2’ Spoilers – Which Characters Die?

Read More
Horror, Movies, Stephen King
Find out how Pennywise the Clown dies in the final installment of the 'IT' film series.