Joao Franco was introduced to Below Deck Mediterranean fans when he created a love triangle between himself and two other crew members. Ultimately, he chose Brooke Laughton and the two started dating. The relationship didn’t work out and Franco entered the next season of the show single, claiming that Laughton had cheated on him. But, Laughton was quick to dispute the cheating claims, according to The Daily Dish.

In a statement to People, Laughton said, “Although it initially hurt to hear Joao blamed our relationship break down on a false claim that I cheated on him, it is very true to his character and allows him some relief for his ego. In reality, there was absolutely no cross over between when I realized what kind of person I wasn’t looking for and the kind I was and I absolutely did not cheat on him.”

She continued, “If this theory makes him sleep easier at night, then so be it but him saying this only makes me lose even more respect for him. I know exactly the kind of person I am and I’m extremely content and secure in the facts of how everything played out … I only hope he continues to [grow] and learn what it is to be a man and a good person.” Franco said that he and Laughton are no longer in contact.

Joao Franco Has a New Girlfriend

Feeling accomplished!?? Recap of this week- WE helped save 100’s of lives in the Bahamas ??, front row seats at #ub40 concert, front seats at the #usopen, #WWHL Monday with @benstogram and a new episode of #belowdeckmed !!! What an incredible week to live through❤️❤️ thank you for such a wonderful community pulling together to save the lives of so many people in the Bahamas!!!❤️❤️❤️ we had more supplies delivered yesterday!! So amazing everyone. I am overwhelmed with “feel good” factor and grateful for everyone’s input❤️ one love to all❤️❤️❤️

When it comes to speaking with ex Laughton, Franco told Bravo, “We haven’t spoken to each other since, not once. She had apologized to me through a friend of mine, and then I just said to her, I don’t know what she wanted, but I was over it, so I told her that. I wouldn’t be able to speak to her again.” But, perhaps another reason Franco isn’t talking to Laughton is that he has moved on with another woman.

The Daily Dish reported that Franco is currently dating a woman named Michelle Dicu. Franco revealed, “My girlfriend lives in New York. We spend as much as we can together. It’s worked out well so far in terms of getting a break and coming down; it’s almost every second or third weekend that I make plans to try to come up.”

There’s no such thing as an average day with this lady? #beachday #smiles @white.water.life @carlsbaitandtackle #yachtlife #summer

Right before the season 3 reunion taping of Below Deck Mediterranean, when Franco was still together with Laughton, Franco met Dicu. He admitted to The Daily Dish, “I met her the day I did the reunion. A dentist got a hold of me to bleach my teeth before the reunion. I accepted and when I got there, she couldn’t do it, so my girlfriend now reluctantly took it on because she wanted to leave to do yoga or something so she was rather upset that I had took her time up. She fed me a lot of happy gas [so I couldn’t] talk anymore.”

He continued, “I went to the reunion and myself and Brooke had issues that the reunion show. I hadn’t spoken to [Michelle] for many months after that and I had seen that she was coming up to Fort Lauderdale when I was around. Yeah, we got together. She said that she wanted to go paddle-boarding and I had taken her out and it was very mutual, very mutual to start off with. Things grew from there.” 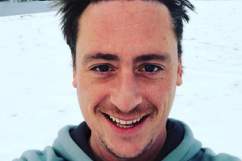 Does Chef Ben Robinson Have a Girlfriend? Who Is He Dating?