It looks like Jesus Is King is almost here. While the roll-out for Kanye West’s upcoming album has been messy, fans are still hopeful that they will get to hear the album before the weekend. West’s wife Kim Kardashian has compounded these hopes by tweeting out a revised, seemingly official tracklist.

The new tracklist has 10 tracks instead of the original 12, and several of the tracks have been switched around to reflect West’s recent changes. There are also several track titles that are new, so it is unclear whether they are different tracks or merely retitled versions of the same ones that appeared on the original. These changes are most notable with the album opener, “Up From the Ashes,” and the tracks “Follow God” and “L.A. Monster.”

Check out the original tracklist, followed by the revised version below.

Several artists have been confirmed to appear on the album, including Ty Dolla $ign and Ant Clemons. Both artists will appear on the track “Water,” and have contributed to previous West albums, including The Life of Pablo and the aforementioned Ye.

The revised tracklist suggests that there will be additional guest features on the album. “New Body” was leaked along with several of the Yandhi tracks in late August, and it includes guest verses from Nicki Minaj and Ty Dolla $ign. You can listen to the leaked version here. Despite her involvement in the original, however, Minaj will not appear on the final version. She previously rapped on West’s 2010’s single “Monster” and provided the outro for 2018’s “Violent Crimes.”

2 more days (maybe unless the album gets pushed back)…. who’s ready? ??‍♂️#kanyewest

During an episode of Queen Radio, Minaj talked about West and his spiritual journey. “I want to touch on, just briefly real quick, and I’m going to go,” she said on the air. “Because I felt the same exact way. Sometimes in the music business, we think that other artists don’t believe in God or are aren’t spiritual as we are, and stuff like that. So we automatically go to the normal, ‘Oh, what up?’

Other artists who have been confirmed to appear on the album are Young Thug and Clipse. The former has been teasing his involvement since 2018, when he messaged West on Twitter, while the latter comes completely out of left field. Clipse have not released a studio album since 2009, so it will be interesting to see what they bring to the table. For updates on what other artists will be featured, click the link below. 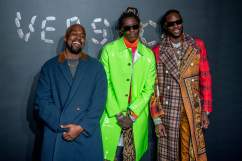 UPDATE: All Confirmed Features on Kanye’s ‘Jesus Is King’