Kanye West’s new album hasn’t come out yet. Jesus Is King was scheduled for release on Sunday, September 29, following a listening session in New York City. The proposed release date (which was already a carryover from an earlier date) passed, and West did not put the album out. The album will now be released on Friday, October 25.

Jesus Is King will be West’s first album since 2018’s Ye, and was preceded by several snippets and song leaks. We’ve listed all the different streaming platforms that the album will be released on, and the ways in which you can listen to it.

2 more days (maybe unless the album gets pushed back)…. who’s ready? ??‍♂️#kanyewest

Jesus Is King will be available to stream on iTunes and Apple Music. If you have an Apple Music account, you can go into the app on your phone or tablet and set the notifications to alert you when the album is out. Click here to learn how.

Based on the standard release schedule for Spotify, West’s Jesus Is King will also be available to stream on the platform. If you don’t have a Spotify account, you can sign up for one here and pay only $0.99 for the first three months.

Whenever West decides to release Jesus Is King, it will be available to listen to on Tidal. The streaming service offers a free 30-day trial with Tidal Premium, which provides  access to music videos and curated playlists.

The lead up to Jesus Is King has been one of the most complex of West’s career. The album was pitched as a sequel to his 2013 album Yeezus, and was originally titled Yandhi. West announced that it would come out in September 2018, but he delayed it due to it not being complete. Several high-profile leaks derailed the album, however, and the rapper decided to shelve it completely.

Jesus Is King is said to have a stronger gospel influence than Yandhi. Fans who attended the listening session on Friday said that the album contains no cursing, and focuses on themes of religion and salvation. “I’d say 80 percent of the album was about Jesus and God,” said attendee Inan Ahmed. “There were a couple songs which were different and faster, but most of the album is gospel, with him rapping occasionally.”

Kim Kardashian announced the album release date and the tracklist on August 29. On September 27, she posted a revised tracklist with new song titles and a shorter runtime. Check it out below:

Danielle Bennett, another attendee, said that West has turned over a new leaf. “I don’t remember there being any vulgar lyrics, which is definitely a first for him,” she told Complex. “I think the entire album really represents this transition he’s gone through from being angry and struggling with his mental health to finding God and becoming a new person.” 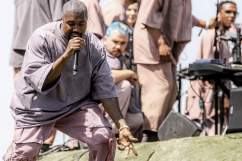