Larissa Dos Santos Lima, star of the hit reality series 90 Day Fiancé, recently broke up with boyfriend Eric Nichols after an eight-month romance. Unfortunately for Eric, he found out about the break up the same way that everybody else did – through Instagram, as well as from his own mother, who texted him shortly after Larissa posted about the split on social media.

Larissa and Eric started dating less than a month after she and ex-husband Colt Johnson split earlier this year. After Colt and Larissa’s messy divorce, the reality star started dating Eric after the two connected on Tinder. The happy couple appeared quite smitten with each other these last eight months, so it came as somewhat of a shock when the reality star suddenly called it quits.

So what happened between the two? Why did Larissa break up with her boyfriend so suddenly, and over social media no less? Here’s what we know about the split:

When I Invest in myself, the outcome is priceless ✨?? – #90dayfiance #90dayfiancehappilyever #tlc

On Wednesday, September 11, Larissa announced to her fans on social media that she had broken up with Eric before he even knew what had happened. Larissa posted on Instagram that she tried to “heal one painful breakup by jumping into another” when she started dating Eric, hinting that they might have moved too quickly when they started dating so shortly after her divorce with Colt.

“After eight months of being Erickee’s girlfriend, I have to tell my followers that we have decided to break up and go our separate [ways],” she wrote in the post. “I try to heal one painful breakup by jumping in [a] relationship with Erickee, but I know now I need to work on me and focus on my healing of my scars.”

She added, “There [are] no hard feelings or regrettees, but I need to look in my own soul and focus on being the best Larissa I can be,” she told fans. “I [am] not sure what will come [in] the future, but I am excited for it. I look forward to this time in my life as a reflection on my own personal dreamees and goals I set to do. Thank you for all your love, strength and support [for] me always.”

However, Larissa also told Us Weekly that she is officially “done with men and men trying to exploit me,” and that she hopes to remain single for sometime following this split, so it doesn’t sound like she was as easygoing about the break up as she tried to make it sound to her fans. 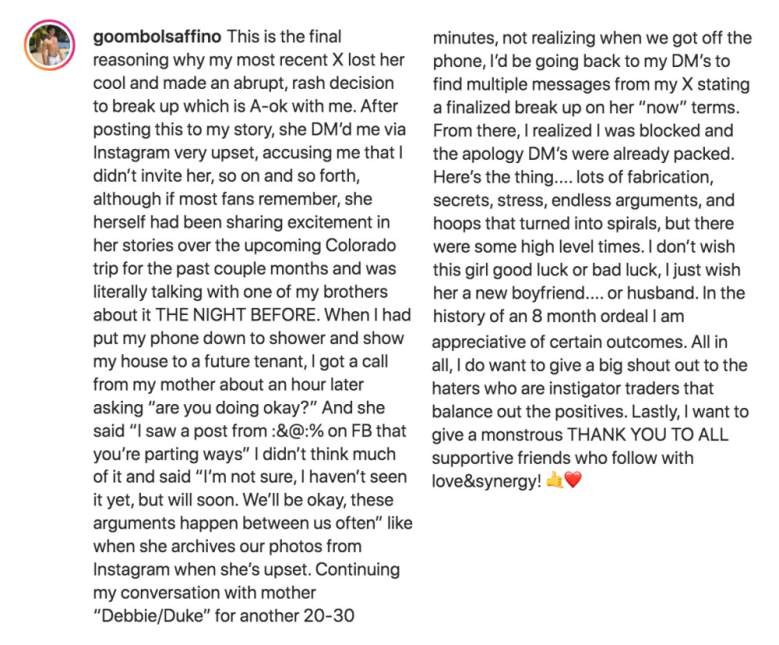 ‌Eric’s version of events about the break up, which he shared on his personal Instagram page.

Although Larissa’s comments about the break up make it sound like a mutual agreement and that it was a heartbreaking decision for her to make, Eric has a different take on the split, and also took to Instagram to tell his side of the story. Eric shared texts between Larissa and his brothers, as well as a message from his mother, who asked him how he was doing after a break up that he apparently knew nothing about.

According to his Insta posts, Eric said that he and Larissa had been planning a trip to Colorado to visit his family over the past few weeks. He said Larissa DM’d him claiming he didn’t invite her on the trip, but he also mentioned she’d been talking on her Instagram stories about the trip for months, so she definitely knew about it.

Eric posted screenshots of Larissa’s conversation with his brothers about coming to Colorado to visit his family.

Eric also shared screenshots of conversations Larissa had with his brother, talking about how excited she was to meet their “super mom,” as well as screengrabs of the flight information and other messages between him and Larissa. You can check out some of the screengrabs above, courtesy of Eric Nichols’ Instagram account.

Sharing a screenshot of his flight itinerary, he wrote, “This is the final reasoning why my most recent [ex] lost her cool and made an abrupt, rash decision to break up, which is A-OK with me. After posting [that photo] to my story, she DM’d me via Instagram very upset, accusing me that I didn’t invite her, so on and so forth.”

He continued, “If most fans remember, she herself had been sharing excitement in her stories over the upcoming Colorado trip for the past couple months,” he pointed out. “[She] was literally talking with one of my brothers about it THE NIGHT BEFORE. When I had put my phone down to shower and show my house to a future tenant, I got a call from my mother about an hour later asking, ‘Are you doing OK?’ She said, ‘I saw a post from :&@:% on FB that you’re parting ways.’ I didn’t think much of it and said, ‘I’m not sure, I haven’t seen it yet, but will soon. We’ll be okay, these arguments happen between us often,’ like when she archives our photos from Instagram when she’s upset.”

“[I continued] my conversation with [my] mother, ‘Debbie/Duke,’ for another 20-30 minutes, not realizing when we got off the phone, I’d be going back to my DM’s to find multiple messages from my [ex] stating a finalized break up on her ‘now’ terms,” he added. “From there, I realized I was blocked and the apology DM’s were already packed.”

“Here’s the thing,” he finished. “[There were] lots of fabrication, secrets, stress, endless arguments and hoops that turned into spirals, but there were some high level times.”

Colt Messaged Larissa Shortly After Her Break Up

According to Us Weekly, Colt reached out to Larissa shortly after news of the break up spread. “Colt texted Larissa yesterday after he heard about her split from Eric and she thought he was being nice and there for her, but this morning he reposted a story that Eric gave, and Larissa thinks Colt is completely two-faced,” an insider told Us Weekly.

Larissa shared screenshots of the messages on her Instagram stories, and the messages ranged in tone from aggressive and rude to understanding and sympathetic. According to Us Weekly, the first series of messages read “You don’t just come to me demanding s–t You dumb broad,” he wrote. “You seduce me first then you convince me I’m not a p–s like your exes … You are a loser, always will be Can’t finish anything, school, marriage, children.”

He then added, “I never stopped caring for you and i wish you the best. Good luck in your future and your relationships.” He also noted that he did not “care that much about [Larissa’s] life” but was “sad that we can’t even be friends after everything.”

Larissa added her own caption on the posts, writing “Last time you did it to me,” she wrote. “Now I never ever will talk to you.”