Season 2 of The Masked Singer is well underway, and fans are curious which celebs are under which masks. Black Widow is one of the most mysterious competitors on the show, given that her clues have done little to clarify her identity.

Fans are struggling to guess which celebrity is singing her way through the competition, but we’ve collected all the clues and guesses below. Here’s what you need to know about Black Widow:

1. Black Widow Says She Is ‘Hiding In Plain Sight’

Will #BlackWidowMask ?️ catch the competition in her web? #TheMaskedSinger is all new TONIGHT at 8/7c on @FOXTV.

During her first performance, Black Widow sang “I Wanna Dance With Somebody” by Whitney Houston. Based on her performance, it seems that the celebrity behind the mask is a female who has lots of experience singing and performing in front of a crowd.

Black Widow also teased some crucial information about her identity. “I’m here to crawl my way to the top and spin a web around the competition,” she told the panel. “If the other singers aren’t scared of spiders, just wait until they hear my voice. America, you can guess my identity all you want, but I’m gonna leave you hanging by a thread.”

Things got even more intriguing when the celebrity gave her reasoning for choosing the Black Widow as her disguise. “Like me, they hide in plain sight,” she revealed. “I’ve been packaged my whole life.” She also said she was looking forward to showing fans her “darker, edgier, alien” side.

2. Black Widow Has Ties to Tarot Cards & the Supernatural

Black Widow drops several subtle hints about her identity during the video package. Her logo appears on a Tarot card, and what’s more, there appears to be an hour glass on the back of the logo. The ties to the supernatural has led many to draw comparisons between Black Widow and Raven-Symoné.

Raven played a physic on the Disney Channel, and it would make sense that the supernatural ties be reflective of a character rather than a celebrity in real life. “Why don’t y’all think the black widow is raven? It’s people really out here forgetting she was a whole cheetah girl,” a Twitter user wrote. “Raven can sing. She even sang the That’s so raven theme song.”

For more information on Raven and her connection to Black Widow, read on.

3. Black Widow Is Believed to Be a Resident of Atlanta, Georgia

Did you pick up on any hints? ? #BlackWidowMask #TheMaskedSinger

There was an emphasis on peaches throughout Black Widow’s clue video, which has led many to speculate that she could be from Atlanta, Georgia. This has led some fans to theorize that Black Widow could secretly be a cast member from the reality series Real Housewives of Atlanta.

Kandi Burruss has been thrown around as a possible candidate, given that she’s capable of carrying a tune, but there’s little else that supports her being a lock. Black Widow also said “welcome to my empire,” which may refer to Georgia’s other nickname, “Empire State of the South.” None of the celebs on the Masked Singer panel have suggested thus far are from Georgia.

On the latest Masked Singer episode, Black Widow revealed that she’s been waiting to shed her “squeaky clean” image. “While I’ve got an amazing career that has taken on all different shapes, I’ve been waiting for a moment like this,” she said. “I don’t have to pretend, because all you know about me is my voice and my badonkadonk.”

4. Black Widow Is Involved In the Filmmaking Industry

Black Widow’s second clue video introduced another piece of her identity. There were several references to acting and filmmaking, as film reels can be seen in the background of certain scenes. There were also terms like “director’s cut” and “deleted scenes,” and a desire to shed her “fluffy” onscreen persona, which further strengthened the ties between Black Widow and Hollywood.

Black Widow’s acting clues led the judges to make several guesses about her identity. Jenny McCarthy, Ken Jeong, Nicole Sherzinger and Robin Thicke were in agreement that the celebrity is a television actress who is known for playing bubbly roles. McCarthy guessed that Black Widow could be Amber Riley from Glee, while Jeong guessed Yvette Nicole Brown, his co-star from Community.

Thicke guessed that Black Widow could be Sherri Shepherd from The View. Other names that were thrown around on the internet were Taraji P. Henson (who stars on Empire) and Scarlett Johansson (who plays Black Widow in the MCU), but it remains to be seen whether any of them are correct.

5. Jenny Is Confident That Black Widow Is Raven-Symoné

Black Widow has the panel of judges stumped. That said, Jenny McCarthy has thrown out the possibility that she could be Raven-Symoné. This theory has been supported by fans, who’ve pointed out the similarities between the Disney Channel star and the mysterious contestant. Fans point out that Raven was born in Atlanta, Georgia, and she currently stars on the Disney Channel sitcom Raven’s House, which ties into a previous clue about a house.

Raven has starred in a number of films, including Cheetah Girls, which showcased her impressive singing, so it stands to reason that she would have what it takes to deliver Black Widow’s powerhouse covers. The most compelling evidence that Raven is Black Widow, however, are her ties to the supernatural. Raven’s most popular sitcom was That’s So Raven, where she played a physic. 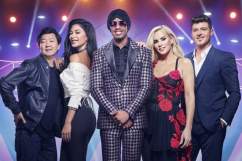 The Masked Singer Recap: Who Gets Unmasked Tonight? 10/16/19

Read More
FOX, Reality TV, TV
Black Widow is one of the contestants on 'The Masked Singer' season two. Find out clues about her here.