Getty Which of the seven dog finalists won the 2019 American-Humane Hero Dog Award? Read on to find out.

The American-Humane Hero Dog Awards aired tonight at 8/7c on Hallmark Channel. According to the Hallmark event website, the annual ceremony “searches out and recognizes America’s Hero Dogs – often ordinary dogs who do extraordinary things, whether it’s saving lives on the battlefield, lending sight or hearing to a human companion, or just welcoming you home at the end of a hard day.”

So who was the 2019 Hero Dog Award winner? Voting is closed and the results are in – the 2019 winner is Alice! You can read more about Alice, the other finalists and the competition below:

Alice is the Winner of the 2019 Hero Dog Award! 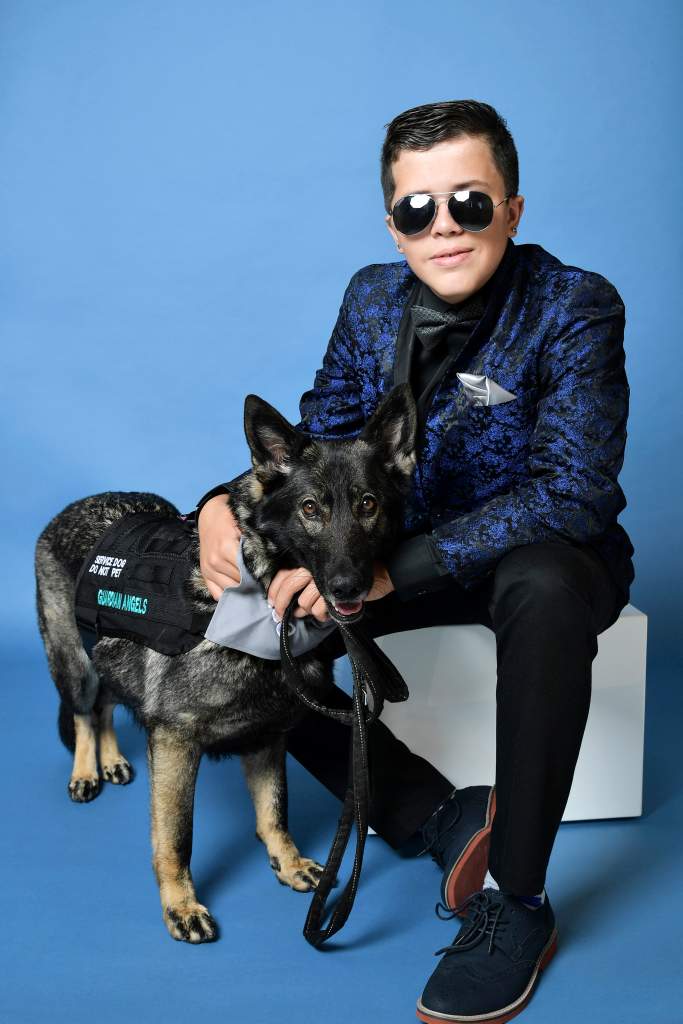 Alice the Service Dog is this year’s 2019 American-Humane Dog Hero winner! She won the award for the amazing services she provides her human Antonio every single day. Antonio was shot in the head when he was just 9-years-old after a man opened fire into his parent’s car. Antonio spent 18 days in a coma and has had five brain surgeries in the years following the incident, and half of Antonio’s brain is now covered by an artificial skull.

In October of 2016, Antonio was paired with Alice from Guardian Angels Medical Service Dogs in Florida, and the two have been inseparable since. Although he is healing from the wound, Antonio still battles seizures, migraines, balance issues, episodes and more, so Alice is a constant support through it all. Without Alice to alert him of an oncoming spell, Antonio could have a fatal, life-threatening fall.

“Going to school, the store, or even just a walk outside would be impossible for [Antonio],” the Hallmark bio on Alice states. “Never once has Alice failed to alert to an oncoming seizure or ‘spell,’ and she assists him with his balance issues. Alice has given Antonio the chance at a new normal life he couldn’t have had without her. She is a loyal and loving hero everyday. She’s saved Antonio’s life many times. If that’s not a hero, I don’t know what is. She is his Guardian Angel, and helps him live his New Normal to the fullest extend possible.”

#SundayFunday: Time to set your DVR for tomorrow's broadcast of the 2019 @AmericanHumane #HeroDogAwards, the only show where the stars go home covered in dog fur! @BethStern @polahaha

This were seven amazing finalists for the Hero Dog Award this year: Sergeant Yeager, Jeanie, Gus, Leader Dog Lady, Piglet, Antonio and Dax. Although all seven dogs (well, all dogs everywhere) are worthy of the award, only one pupper was chosen tonight, and that was Alice.

The dog finalists are nominated through eight different categories for the Hero Dog Awards: Law Enforcement & Arson Dogs, Service Dogs, Therapy Dogs, Military Dogs, Guide Dogs, Search and Rescue Dogs, Hearing Dogs, and Emerging Hero Dogs (which is the category for ordinary dogs). According to the Hallmark website, finalists in each category are judged by a blue-ribbon panel to determine the top American Hero Dog.

Dax was the finalist in the Law Enforcement category, Alice in Service Dog, Piglet in Lost and Rescue, Leader Dog Lady in Guide/Hearing Dogs, Gus was our Emerging Hero shelter doggo, Jeanie was our Therapy pup, and Sargent Yeager was our Military man.

GettyThe Hallmark American-Humane Hero Dog Awards are tonight. Read on for information on the finalists for 2019.

“The Hero Dog Awards, presented for the past four years by the Lois Pope LIFE Foundation, is a moving celebration of our four-legged friends and the innumerable ways they enrich, protect, and save lives every day,” the website states. “The annual national competition searches out and recognizes America’s Hero Dogs – often ordinary dogs who do extraordinary things, whether it’s saving lives on the battlefield, lending sight or hearing to a human companion, or just welcoming you home at the end of a hard day.”

Although Alice was the official 2019 winner this year, all of the puppers deserve awards, recognition and a lifetime of love for the services they provide. They were all winners this year!