Kanye West has done it again. The rapper announced that his latest album, Jesus Is King, would be released at midnight on Friday, October 25, after several missed dates. That said, midnight has arrived, and there is no new music.

The fact that the album has been pushed back again, combined with West’s insistence that it would drop, has fans pretty upset. Read on for a rundown of the best memes and Twitter reactions to the Jesus Is King delay. Or rather, the latest delay.

UPDATE: The album is now available on streaming services.

Me thinking that because @kanyewest is a man of god, that he would actually drop his album #JesusIsKing pic.twitter.com/RRYB6ut07X

everyone who stayed up expecting Kanye to drop Jesus is King…. again pic.twitter.com/i8OrUjAZgZ

Me walking outta kanye life after being lied to for the last damn time #JesusIsKing pic.twitter.com/c4bI7rIr5I

Me falling for #JesusIsKing for the millionth time in the past month ? pic.twitter.com/lJCOBHuQpx

Some fans took issue with the fact that West has been promoting a truthful and peaceful lifestyle, and yet he continues to deceive fans by getting their hopes up. “Can’t believe Kanye West and Kim Kardashian lied multiple times about the release date of the album Jesus Is King when it actually features a song called ‘On God,'” wrote one user.

A separate fan felt that West was merely trolling the rest of the internet. “Remember when someone said, ‘One day Kanye west will release an empty album and tell his fans to imagine the music?’ I think this is it, Jesus Is King is the album we are supposed to be imagined,” they tweeted.

People really though Jesus is King was gonna drop at midnight #JesusIsKing pic.twitter.com/39ag9Wdg8O

After you let Kanye play you for the 4th time… #JesusIsKing pic.twitter.com/kNf6iWcFVv

me ready to cop that jesus is king zip file pic.twitter.com/LZzZdMOQ2A

Other users were disappointed by the entire rollout for the album, and vowed to not get their hopes up again. “This is the one that broke me. I’m so disappointed and angry,” a dejected fan wrote. “At myself, of course, for believing that @kanyewest would actually release music.” A second fan pointed out that West’s actions leading up to the release date implied that it was genuine. “Being a Kanye fan is rough,” he remarked. “How are you going to make an interview, tweet the release date, make a playlist on spotify, and drop some f**king merch and still not drop the album.”

There are others who have pointed out that West created a playlist for Jesus Is King on Spotify, but the playlist remains empty. It’s unclear whether the rapper is simply toying with fans or actually plans to drop the album in the playlist at some point on Friday. “Yo, Kanye really created a playlist for Jesus Is King, but the album ain’t even in there or drop at all,” a fan pointed out. “This is some next level foolery.”

Yo, Kanye really created a playlist for Jesus Is King, but the album ain’t even in there or drop at all. ? This is some next level foolery pic.twitter.com/3NzxL84xdT

Me after staring at Spotify for the past 20?#JesusIsKing pic.twitter.com/N7NnWHpk5y

There is some confusion surrounding the album’s latest delay. Some have speculated that it will be released at midnight PST which would equate to 3 a.m. EST time. Albums are generally released on EST time, but West tweeted out that he’s working on the final mix and that he is not going to sleep “until the album is out.” 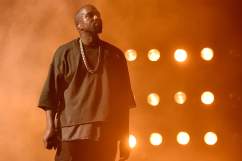 UPDATE: What Time Is Kanye West Releasing ‘Jesus Is King’?

Read More
Kanye West, Memes, Twitter
Kanye West has missed the latest release date for his album 'Jesus Is King.' Check out the fans have to say.