Getty Cardi B and Chance the Rapper

Rhythm + Flow is the latest competition series to premiere on Netflix. The series focuses on a panel of celebrity judges as they travel the country and search for the next breakout hip-hop star. Each episode will feature an appearance from an established hip-hop artist, who will offer advice to the upstarts. Auditions take place in Los Angeles, Atlanta, New York City and Chicago.

The trio of judges are no slouches, either. They are made up of crossover superstars Cardi B, Chance the Rapper, and T.I. Read on to learn more about the trio and their hopes for finding the next big rapper.

@rhythmandflownetflix Is now streaming on Netflix …what do you guys think ? What do you think ? Did I do good as a judge ? Are you enjoying it ? Is this the best competition show you ever seen ?

Cardi B is one of the most popular rappers in the world. She got her start on the VH1 reality series Love & Hip Hop: New York, and then broke off to pursue a music career full-time. The gambit paid off: Cardi has since landed three number-one singles on the Billboard Hot 100: “Bodak Yellow,” “I Like It Like That” and “Girls Like You.”

Cardi B is the sixth female artist to achieve three number one-singles during the 2010s, the second female rapper to top the chart with a solo output, and the first to attain multiple number-one songs on the Hot 100. Cardi has also had a highly-publicized marriage to rapper Offset, and together they have a daughter named Kulture.

Brandon Riegg, Netflix’s VP of nonfiction shows, said that Cardi plays a huge part in the Rhythm + Flow appeal. “Cardi took her role very seriously on the show. She was equal parts compassionate and tough love,” he told Variety. “I think it will be really intriguing and impressive how she takes on that mantle of judging, and I’m really excited for more viewers to see that side of her.”

THIS NOT THEM OTHER SHOWS ?????? @RHYTHMANDFLOWNETFLIX

Chance the Rapper burst onto the scene with his sophomore mixtape, Acid Rap, and has been one of hip-hop’s most eccentric artists ever since. His third release, Coloring Book, was the first streaming-only album to win a Grammy Award. Chance is part of the group Donnie Trumpet and the Social Experiment, and has collaborated with artists as varied as Kanye West, Action Bronson and Lil B.

Chance’s latest album, The Big Day, was released to critical and commercial success, and was inspired by his marriage to his longtime girlfriend Kirsten Corley. They have two children together. Chance told Complex that he’s eager to find the next big artist, and that he’s confident the hip-hop community would embrace someone who came from a reality series. “As long as you’re authentic, as long as you true to your real story,” he explained.

T.I. is the veteran on the Rhythm + Flow panel, and he is recognized as one of the greatest Southern rappers of all time. He’s released ten studio albums, and seven of them have reached the top 5 on the US Billboard 200 chart. He’s landed two number-one singles on the Billboard Hot 100: “Whatever You Like” and “Live Your Life” featuring Rihanna. He’s part of a select group of artists who has replaced themselves at number one and simultaneously occupied the top two spots.

T.I. said that he wants to find an artist who can stay true to themselves. “Artistry, authenticity, individuality, the same way Chance is in his music, I am in my music, and Cardi is in hers,” he explained. “Each of our presentations are very unique to who we are. We’re looking for the next generation’s version of that.” 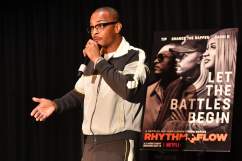