Scott Disick and ex-girlfriend Kourtney Kardashian have three kids together. And, despite their ups and downs over the years, they have managed to come to a place where they get along so well they even take family trips together. Currently, Disick is dated his longtime girlfriend Sofia Richie and even she goes on trips with the former couple and their children. But, one thing about Disick’s relationships with his ex and his present love is the age differences.

Even though there are so many years between them and it could be an awkward situation, Kardashian said on an episode of the Today Show, that she, her ex and his girlfriend definitely get along well. She explained, “We travel together and … I think it’s a good message to show other people.” A source also told People that Kardashian, Disick and Richie get along great and “as much as people would love there to be, there isn’t any drama between Scott, Sofia and Kourtney. They spend a ton of time together, and Kourtney is comfortable with Sofia around the kids. Scott and Kourtney have gotten along really well for a long time. It’s not only the family trips but dinners, celebrations, etc. They spend time together with Sofia and it isn’t weird.”

On an episode of Keeping Up With the Kardashians, Kim Kardashian asked Disick if he ever had moments that were difficult because Richie was so young. Disick’s reply was that Richie is actually very mature. He also told the cameras, according to Style Caster, “This is the first time I’ve ever been with anybody different, but it’s been a really good thing for me. It’s definitely the first girl besides Kourtney that was a real relationship … part of me is really happy that I’m able to care about somebody again.”

Disick and his girlfriend were first romantically linked in 2017.

Over the years, Kardashian’s younger sister, Kylie Jenner, who is in the same age group as Richie, has become good friends with her. Jenner recently turned 22 and Richie wrote a touching tribute to Jenner for her birthday online. Richie wrote in an Instagram post, “Kylie, you’re 22 and you’ve always been one year cooler than me. But I love you. You’re my best friend. I don’t know what life would be like without you.”

On her social media, Jenner has posted videos and photos, which featured Richie in them as well. She even invited Richie on a promotional trip for her skincare brand Kylie Skin.

When talking about Richie’s friendship with Jenner, a source told People, “She seems like a very loyal friend to Kylie and Kylie appreciates that.” 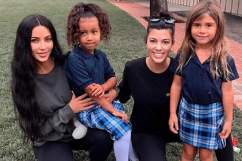 How to Watch the KUWTK Season 17 Episode 3 Online