Chance the Rapper is hosting tonight’s episode of Saturday Night Live. The rapper and songwriter is best known for his colorful persona and eccentric verses. This will be his second time hosting. Read on to learn more about Chance’s SNL stint and how he feels about hosting.

Chance won two Grammy Awards for his 2016 mixtape Coloring Book, including Best New Artist and Best Collaboration for the track “No Problem.” He previously hosted SNL in November 2017, when the musical guest was Eminem. Tonight will be the first time that Chance serves as both host and musical guest, joining an impressive lists of artists that includes Drake, Ariana Grande, Justin Timberlake and Taylor Swift.

During his 2017 appearance, Chance appeared in several popular skits. He appeared as Steve Harvey’s fictional son in a Family Feud skit, and he played a clueless announcer during an NHL game. The latter proved so popular that Chance recently revived the character during a real NHL game. Chance’s discussed his comedic talent during a stint on Jimmy Kimmel Live! The rapper admitted that he previously tried to do stand-up, and that he has a comedy set coming up at the Laugh Factory in Chicago. “I’m a comedy guy,” he told the host. “One day [I’ll] become a world-famous comedian… I’m building up, I’m gonna make it a whole thing.”

Chance appeared onscreen in the horror-comedy Slice, but he told IndieWire that he doesn’t plan on starting a full-fledged acting career. “Just being honest, I don’t like shooting movies, I don’t like being on a set or in a trailer,” he admitted. “Austin [Vesely] knows this to be true. And it’s very different from the way that I execute my music after its written.” Despite his apprehensions, he did say that he would enjoy learning more about filmmaking and what goes into making a comedy.

#TBT to this @chancetherapper banger. ? Check the link in bio for the full song!

“The finalized product is always something that I thoroughly enjoy for a long time afterwards,” he added. “So, I think if I do end up doing any more cinema it will be probably be a long, long time from now. I do think what I really enjoy is the creative process. I love how Austin made this vision so tangible and I would love to get into that side at some point, but yeah definitely not sitting in a f**king trailer.”

Chance is having a stellar 2019. He served as a coach on the Netflix competition series Rhythm + Flow, where he searched for the next big star in rap music. He’s also coming off the release of his debut studio album The Big Day. The album peaked at number two on the Billboard 200, and features guest spots from Megan Thee Stallion, Gucci Mane, Nicki Minaj and Shawn Mendes.

Chance will be touring in promotion of the album until November 10, which includes stops in Phoenix, Houston, Detroit, Toronto and Milwaukee. 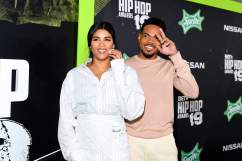 Is Chance the Rapper Married or Single?