Trace Ancar and Hailey Harris are pictured above. Hallmark is continuing its famed Countdown to Christmas TV movie series with Christmas at Graceland: Home for the Holidays, starring Kaitlin Doubleday, Adrian Grenier, and Priscilla Presley. Read on to learn all about the cast, where it was filmed, and see behind-the-scenes photos. This article will have minor spoilers in terms of photos from the movie, behind-the-scenes pictures, and film locations.

The synopsis for tonight’s movie reads: “World-traveler Harper returns to Memphis for the holidays and nannies for wealthy widower Owen while awaiting news about a job overseas. As they grow close, Harper encourages Owen to break out of his routine and spend more time with his children, while Owen encourages Harper to have confidence. Harper and Owen prepare for a joint event at Graceland featuring a fundraiser for Owen’s company and an Elvis at Christmas exhibit Harper is producing. They develop feelings for each other, Harper realizes how much she enjoys living near family and must decide if her home for the holidays will be her forever home.”

It should be noted that although this is the second Christmas at Graceland movie (and the third in the Graceland series overall), this is not a continuation of Clay and Laurel’s story (played by Wes Brown and Kellie Pickler.) Their story was wrapped up in June 2019 with the Wedding at Graceland movie.

‘Christmas at Graceland 2’ Was Filmed in …

The movie was filmed in July, Commercial Appeal shared, so Memphis had to be turned into a winter wonderland during the hot summer months. It was 90 degrees or more during some of the filming. White tarps, spray-on paper, and cotton batting were used to give a believable holiday illusion.

Here are some photos from the filming. Ruth Daniel shared these in public Facebook and Flickr photos. 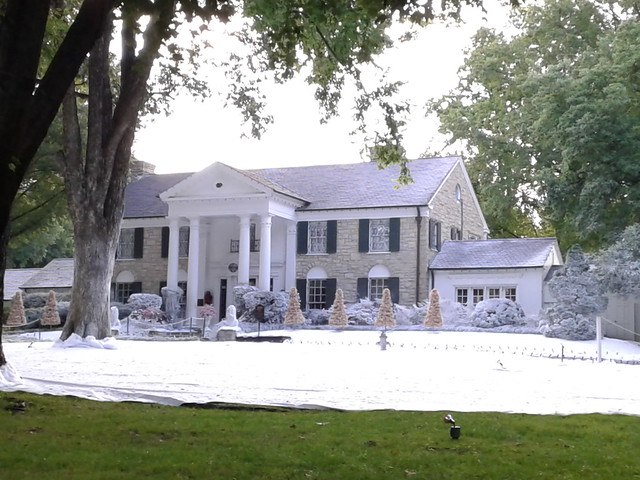 This is one time when you can actually visit the set where the movie was filmed yourself and pretend like you’re really there. You can get a personal Ultimate VIP Tour of Graceland if you want for $174, but there are also tours starting at around $61.

Other fans excitedly shared their photos from the filming too.

Here are more photos of the July transformation.

This picture was taken in August at the Grawemeyer Estate, one of the filming locations.

And here’s a behind the scenes video shared by the Tennessee Entertainment Commission.

Graceland actually pitched the original movie idea to Hallmark, Commercial Appeal reported. Michelle Vicary, executive vice president of programming for Crown Media Family Networks, told Commercial Appeal: “Graceland pitched the idea, and of course we said yes immediately because what an iconic landmark in American history the house is — the house and Elvis.”

Meet The Cast for ‘Christmas at Graceland: Home for the Holidays’

Chase Bryant stars as himself. Bryant’s debut single “Take It On Back” hit the Top 10 of the Country Billboard Chart and his second hit “Little Bit of You” hit #3.

Alan Wells’ credits include Snowfall, All American, TURN, The Vampire Diaries, Through Your Door, Guides, Sleepy Hollow, Feed, and more.

Mabrey’s credits include In the Rough (Holly), Wild Nothing, The Perfect Mother, Holiday Breakup, The Librarians, Beyond the Trek, Still the King, Once Upon a Time, The Client List (Lisa), Memphis Beat (Alex), Mad Men, Without a Trace, and more.

Trace Ancar and Hailey Harris are pictured above, along with Adrian Grenier, Kaitlin Doubleday, and Nina Thurmond.

Trace Masters is Taylor Read. He was Little Hap in Hap and Leonard, Max on The Haunting of Hill House, Frank on The Dirt, Tad on Looking for Alaska, and Newt’s son on Free State of Jones.

Hailey Harris stars as Petra Ellis. She’s been in a number of shorts, was mini Samantha in Cake, and was Jenna in Social Girl. She was Amber on The Matter of Life.

Nina Thurmond is Camilla Read. This is her first feature length credit, according to IMDb.

Want to stay updated on Hallmark shows and movies that this author writes about? You can join the author’s email list for updates; choose the Hallmark option and you will only receive updates about Hallmark news.

Read More
Christmas, Hallmark, TV
Learn all about Hallmark's second Christmas at Graceland movie, Home for the Holidays (and third in the Graceland series.)