The Butterfly has been one of the most impressive performers during season 2 of The Masked Singer. Her charisma and stage presence has led fans to speculate that she may be a professional singer, and possibly even a member of a group.

The theory that’s gotten the most traction is that the Butterfly is singer and former Destiny’s Child member Michelle Williams. Is is true? Could she be the one beneath the mask? Read on below for our reasons as to why Williams could be the Butterfly.

The Butterfly Prays That She Won’t ‘Fall Over’

The Butterfly said “I just pray I don’t fall over” during her clue video, which tipped off many to the possibility that Williams could be under the mask. In 2004, Williams was performing with Beyoncé and Kelly Rowland on BET’s 106 & Park when she tripped and fell down. She managed to recover and continue the performance, but the moment has become infamous.

GoodHousekeeping.com claims they are 99.99% positive that the Butterfly is Williams, and that the clue about “everyone saying my name” is a reference to the Destiny’s Child single “Say My Name.”

Williams Used to Live In London

The Butterly said that she used to call the city of London her home. The statement also applies to Williams, who moved to London in 2009 to star as Roxie in the U.K. stage production of Chicago. “It’s a real thrill to be given the opportunity to play Roxie Hart in the West End’s spectacular production of ‘Chicago'”, she said at the time.

The Butterfly Promised to Take Viewers to Church

The Butterfly incorporated several references to religion, and Christianity, in particular, during her first clue video. There were shots of a cross, of men praying, and the costumed character used the phrase “take you to church.” This falls in line with Williams’ own views. She has open about her own spirituality over the years, and has released several gospel tracks including the 2014 single “Say Yes,” which featured her former Destiny’s Child group mates.

The Butterfly Has Been ‘Waiting In Her Cocoon’

The Butterfly has been “waiting patiently in [her] cocoon” for the past year, and she used the word “metamorphosis” in relation to her career. Williams has been notably quiet on the music front since 2018, when she split from her fiance Chad Johnson and pulled out of the Broadway production of Once on This Island.

Williams told Good Morning America that she was suffering from depression, and it took her some time to work through her issues. She has since become a mental health advocate, which ties even further into the Masked Singer theory. Butterflies are commonly used as symbols of mental health awareness.

Their voice is a one of a kind – but who is behind the #ButterflyMask? #TheMaskedSinger

It’s taken a while for the judges to guess Williams, but she now stands as the most popular choice. After the second clue video, Jenny McCarthy guessed Fantasia, Ken Jeong guessed Mel B. from the Spice Girls, Robin Thicke guessed pop star Leona Lewis, and Nicole Scherzinger threw out British model Twiggy.

After the third clue video, Thicke stuck with Lewis, but Scherzinger and McCarthy changed their answers to Williams. Tune in to watch The Masked Singer on Fox, on Wednesday nights at 8 p.m. ET/PT and 7 p.m. CT. 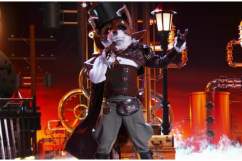 Could the Fox on ‘The Masked Singer’ Be Wayne Brady?