Caroll Spinney, the puppeteer behind beloved “Sesame Street” characters Big Bird and Oscar the Grouch for nearly five decades, died on December 8, 2019, at 85 at his home in Woodstock, Connecticut, after a long battle with Dystonia, the Sesame Workshop announced.

Spinney retired from the iconic children’s TV show in 2018. The Sesame Workshop said in a statement, “Caroll was an artistic genius whose kind and loving view of the world helped shape and define Sesame Street from its earliest days in 1969 through five decades, and his legacy here at Sesame Workshop and in the cultural firmament will be unending. His enormous talent and outsized heart were perfectly suited to playing the larger-than-life yellow bird who brought joy to generations of children and countless fans of all ages around the world, and his lovably cantankerous grouch gave us all permission to be cranky once in a while.”

He is survived by his wife, Debra Spinney, his three children and four grandchildren.

“Sesame Street” co-founder Joan Ganz Cooney said in a statement, “Caroll Spinney’s contributions to Sesame Street are countless. He not only gave us Big Bird and Oscar the Grouch, he gave so much of himself as well. We at Sesame Workshop mourn his passing and feel an immense gratitude for all he has given to Sesame Street and to children around the world.”

Here’s what you need to know about Caroll Spinney:

Caroll Spinney retired from “Sesame Street” in October 2018 after nearly five decades starring on the legendary public television show for children. Spinney was wheelchair-bound from complications caused by his battle with Dystonia, a neurological movement disorder that causes muscle contractions. Spinney’s roles on the show were passed on to new performers. Spinney had stopped doing the puppeteering for Big Bird in 2015 and was only performing the voices for Big Bird and Oscar the Grouch.

“Big Bird brought me so many places, opened my mind and nurtured my soul,” Spinney said in a statement announcing his retirement. “And I plan to be an ambassador for Sesame Workshop for many years to come. After all, we’re a family! But now it’s time for two performers that I have worked with and respected – and actually hand-picked for the guardianship of Big Bird and Oscar the Grouch – to take my alter-egos into their hands and continue to give them life.”

Spinney said, “Before I came to Sesame Street, I didn’t feel like what I was doing was very important. Big Bird helped me find my purpose. Even as I step down from my roles, I feel I will always be Big Bird. And even Oscar, once in a while! They have given me great joy, led me to my true calling – and my wonderful wife! – and created a lifetime of memories that I will cherish forever.”

His iconic roles were inherited by puppeteers he had mentored for years.

“Going forward, the role of Big Bird will be performed by Matt Vogel, Sesame Street’s Puppet Captain and part of its Emmy Award-winning directing team who also performs Count von Count for Sesame Street and Kermit the Frog for the Disney Muppets. Oscar the Grouch will be performed by Eric Jacobson, an Emmy-nominated puppeteer who also performs Grover, Bert, and Guy Smiley for Sesame Street, as well as Fozzie Bear and Miss Piggy for the Disney Muppets,” Sesame Workshop said in October 2018.

2. He Was Born in Massachusetts & Served in the Air Force After High School, Where He Created a Comic Strip About Military Life

Spinney was born December 26, 1933, in Waltham, Massachusetts. After graduating from Acton High School, Spinney served in the Air Force. While he was in the Air Force, Spinney created, wrote and illustrated a comic called “Harvey” about life in the military.

Spinney’s mother named him Caroll because he was born the day after Christmas, according to The Daily Beast. “I was called such names as a kid,” Spinney told the news site. “Being the smallest boy in the class with a name like Caroll. I remember going home and saying to my mom, ‘What were you thinking?'”

“A lifelong artist, Spinney developed a love of puppetry at an early age. He explored puppeteering throughout his childhood and adolescence, and even used money from his performances to pay his college tuition. After serving in the Air Force, he performed as a professional puppeteer in Las Vegas and Boston in the 1950s and 1960s,” the Sesame Workshop said.

“In addition to his virtuosic puppeteering, Spinney is also an accomplished author and visual artist. He co-authored and illustrated his autobiography, The Wisdom of Big Bird. He holds four honorary doctorates, and is a passionate lecturer. He holds a Lifetime Achievement Emmy Award, six Emmys, two Gold Records and two Grammy honors. He is the 2003 recipient of the “Legacy for Children Award,” and The Christopher’s James Keller Award in 2004. His life and career have been documented in the widely-acclaimed 2014 film, I Am Big Bird,” the Sesame Workshop says.

3. Spinney Joined ‘Sesame Street’ in 1969 for Its Inaugural Season After Meeting His Friend & Mentor Jim Henson at a Puppeteering Festival

Caroll Spinney was mentored by and had a lifelong friendship with Muppets and “Sesame Street” creator Jim Henson. They met in 1962 at a puppeteering festival and then began working together in 1969 for the inaugural season of “Sesame Street.”

Sesame Workshop said after Spinney’s death, “Welcomed to Sesame Street by Jim Henson, Caroll thrived under a mentorship that led to a decades-long great friendship. Caroll’s unparalleled career saw Big Bird visit China with Bob Hope, dance with the Rockettes, be celebrated with a star on the Hollywood Walk of Fame and a U.S. postage stamp, and named a “Living Legend” by the Library of Congress. A favorite highlight for Caroll was conducting symphony orchestras and performing with them across the United States, Australia, and China, allowing him to personally connect with families everywhere through the music of Sesame Street.

The Sesame Workshop added, “Caroll Spinney gave something truly special to the world. With deepest admiration, Sesame Workshop is proud to carry his memory – and his beloved characters – into the future. Our hearts go out to Caroll’s beloved wife, Debra, and all of his children and grandchildren.”

Henson’s family issued a statement after Spinney’s death saying, “It was a moment of creative destiny when Caroll Spinney met Jim Henson. The gentle performer who would bring to life two of the most beloved residents of Sesame Street could perfectly convey the humor and heart in our father’s creations. Big Bird was childlike, without being childish. And Oscar the Grouch reflected universal feelings we all share, no matter our age.”

The Henson family added, “Those of us privileged to work alongside him and call him friend saw first-hand that he cared so deeply about what these characters represented and how they could truly create change. Caroll’s decades-long commitment to bettering the lives of children all around the world is his true legacy. That he could do this work so brilliantly, responsibly, and with such infectious love and joy, is his gift to us all.”

4. He Was Married Twice & Met His Second Wife, Debra, Who He Was With Until His Death, on the Set of ‘Sesame Street’

Caroll Spinney and The Muppets attend The 2017 Sesame Workshop Dinner at Cipriani 42nd Street on May 31, 2017 in New York City.

Spinney was married twice. He and his first wife, Joyce Spinney, were married from 1960 to 1971 and had three children. Spinney then met his second wife, Debra Gilroy Spinney, on the set of “Sesame Street.” They married in 1979, according to The New York Times. She had been working for Children’s Television Workshop as a secretary when they met in 1973.

After his first marriage ended, Spinney was depressed and contemplated suicide, according to The Daily Beast. But he then met and began dating Debra and she helped him turn his life around. They later settled down together in Woodstock, Connecticut, where he lived until his death.

Spinney is also survived by his three children, Jessica, Melissa and Ben, along with his grandchildren. 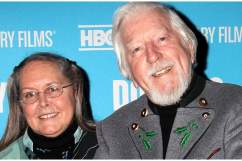 5. Spinney Connected With Fans Who Had Grown Up With Him During a Heart-Touching Reddit ‘AMA’ in 2015

In 2015, Spinney connected with generations of “Sesame Street” fans who had grown up with his beloved characters and shared stories from his time on the show during a Reddit “Ask Me Anything” session.

When asked what his most meaningful interaction with a child during filming was, he told a story that he called “very sad,” but “real.”

Spinney wrote, “I got a letter from a fan who said his little boy, who was 5 years old, his name was Joey, he was dying of cancer. And he was so ill, the little boy knew he was dying. So the man, in his letter, asked if I would call the little boy. He said the only thing that cheered him at all in his fading state was to see Big Bird on television. So once in a while, he wouldn’t see Big Bird on some days, because he wasn’t necessarily in every show. So he asked could I telephone him, and talk to the boy, tell him what a good boy he’s been.”

Spinney continued, “So I took a while to look up a phone, because this was before cell phones. And they got a long cord to bring a phone to the boy. And I had Big Bird say ‘Hello! Hello Joey! It’s me, Big Bird!’ So he said, ‘Is it really you, Big Bird?’ ‘Yes, it is.’ I chatted a while with him, about ten minutes, and he said, ‘I’m glad you’re my friend Big Bird.’

Spinney recalled, “And I said ‘I’d better let you go now.’ He said ‘Thank you for calling me Big Bird. You’re my friend. You make me happy.’ And it turns out that his father and mother were sitting with him when the phone call came. And he was very, very ill that day. And they called the parents in, because they weren’t sure how long he’d last. And so his father wrote to me right away, and said ‘Thank you, thank you’ – he hadn’t seen him smile since October, and this was in March – and when the phone was hung up, he said ‘Big Bird called me! He’s my friend. And he closed his eyes. And he passed away.”

Spinney said, “And I could see that what I say to children can be very important. And he said ‘We haven’t seen our little boy smile in MONTHS. He smiled, as he passed away. It was a gift to us. Thank you.'”