Duran Duran were one of the most successful bands of the 1980s. They are hailed for their singular blend of funk and pop, and they are the focus of the new Showtime documentary There’s Something You Should Know.

Duran Duran has been an active band since 1978, so it’s had to contend with lots of personnel changes over the years. Which Duran Duran members are still active today? Which original members have quit? Read on for a rundown of the band’s 2019 lineup.

Which Original Members Are Still Active?

Roger Taylor left the band in 1985, citing exhaustion and the desire to explore different musical directions. “After a few years of that I thought I needed to remove myself for a while and get myself back to my senses and do a bit of growing up and eventually I came back,” he told the Duran Duran website. “The break wasn’t meant to be that long but life took me in a completely different direction so it was many years before I came back but I think it was time to step out and take some time out.”

Le Bon, Rhodes, and John Taylor continued to release music as a trio until Roger returned in 1994. They have remained active as a quartet ever since.

Which Original Members Have Quit?

@bradelterman In 1982, I walked @duranduran down the Sunset Strip to this parking lot and took a bunch of KODACHROME photos for a Japanese magazine. The parking lot is still there. You can go visit it. #duranduran #sunsetstrip

Andy Taylor was Duran Duran’s lead guitarist during their commercial peak. He continued to record music when the band went on hiatus in 1985, and he founded the group Power Station alongside Robert Palmer and peer John Taylor. Andy decided to leave Duran Duran by the end of the decade, though he has reunited with them for brief stints. He played guitar on the band’s 2001 album Astronaut and its accompanying arena tour.

Andy was slated to perform on the 2006 album Reportage, but complications arose, and he parted ways with the band a second time. The other members confirmed Andy’s departure via a written statement: “We will be continuing as Duran Duran without Andy, as we have reached a point in our relationship with him where there is an unworkable gulf between us and we can no longer effectively function together.” Andy has not performed with Duran Duran since.

Andy Taylor is not the only member to have come and gone. After he left Duran Duran for the first time, the band added drummer Sterling Campbell and lead guitarist Warren Cuccurullo. Both musicians played on the 1990 album Liberty and stayed with the band for varying periods of time. Campbell left in 1991 and Cuccurullo left in 2001.

Stephen Duffy was one of the original members of Duran Duran, along with John Taylor and Nick Rhodes. He was the band’s lead singer, but he left before they signed a record deal in 1979. Duffy has never reunited with Duran Duran, but he has performed with several different bands, including Tin Tin and the Lilac Time. 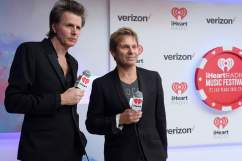 Are John & Roger Taylor Related In Duran Duran? No.