Duran Duran were one of the most popular bands of the 1980s, and they are the focus of the new Showtime documentary There’s Something You Should Know. The renewed interest in the band has led fans to question whether bassist John Taylor and drummer Roger Taylor are related, given their shared surname. Are they brothers?

No, John and Roger Taylor are not related. Their shared surname is merely a coincidence. John Taylor, 59, was one of the co-founders of Duran Duran alongside Nick Rhodes and former singer Stephen Duffy. John performed under the name Nigel when he was a teenager, but he decided to drop the alias and use his birth name starting in 1978. He has been a member of Duran Duran ever since.

John & Roger Taylor Are Not Related Despite Having the Same Surname

Looking back to the great time John and Roger had with Russell Brand and the incredible folks at the Changes UK Fire & Ice Ball!⠀ ⠀ ⠀ #duranduran #rogertaylor #johntaylor #russellbrand #decadeofchange #changesuk

Roger Taylor, also 59, performed in numerous bands before joining Duran Duran. He came on board in 1979, and played drums on the band’s first three studio albums (Duran Duran, Rio, and Seven and the Ragged Tiger) as well as the live album Arena. Roger stepped away from the band in 1985, citing internal drama and the differing interests of each member.

“I think the band had gone into two factions at that time as well,” he told the group’s official website. “There was the Arcadia group and there was the Power Station group [formed by Andy and John Taylor] and I kind of fell in between the two of those a little bit so it was quite a strange place to be. At that point I think the group spirit had died a little bit and we all went off and did different things for a while.”

Roger rejoined Duran Duran in 1994 and has remained a core member. He is not related to the Queen drummer of the same name, and their shared profession is yet another coincidence.

John and Roger are not the only Duran Duran members with the surname Taylor. Andy Taylor, 58, was the lead guitarist on the band’s first six albums, but he quit in the late 1980s to focus on the aforementioned Power Station. He has sporadically reunited with Duran Duran over the years, but he is not a part of their current lineup, nor does he appear in the Showtime documentary. Andy is not related to John or Roger Taylor.

Despite not being related, the trio of Taylors did have a link prior to forming Duran Duran. Findery reports that all three men worked at Rum Runners, which is a bar located in the UK. John was a bouncer, Roger bussed tables, and Andy was a cook. Nick Rhodes, the long time keyboardist for Duran Duran, also worked at Rum Runners as a DJ. 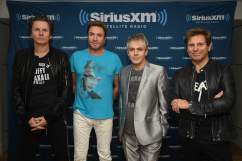 Duran Duran 2019: Who Are the Band Members Today?