Legendary singer Linda Ronstadt is an honoree at the 2019 Kennedy Center Honors. Her career has spanned 40 years and many genres, including country, rock and roll, big band, jazz, opera, Broadway standards, Mexican and Afro-Cuban influences.

Ronstadt has sold more than 50 million albums worldwide, has more than 30 gold and platinum records, 10 Grammy Awards, the National Medal of Arts and was inducted into the Rock and Roll Hall of Fame.

“In this class of honorees, we are witnessing a uniquely American story: one that is representative of so many cultural touchstones and musical moments that make our nation great,” Kennedy Center President Deborah Rutter said in a statement. “When I look at this class, I see the hopes, aspirations, and achievements not just of these honorees, but of the many generations they have influenced and continue to influence. We’re not just looking back; these honorees are urging us to look forward as well.”

Rap legend and 2017 honoree LL Cool J will host the 2019 Kennedy Center Honors, which was pre-taped and airs on CBS on Sunday night at 8pm ET/PT.

Linda Ronstadt Has Won 10 Grammy Awards, the National Medal of Arts and Was Inducted Into the Rock and Roll Hall of Fame in 2014

Linda Ronstadt was born on July 15, 1946 in Tucson, Arizona. While attending the University of Arizona in late 1960s, she formed the band The Stone Poneys with guitarist Bob Kimmel and guitarist/songwriter Kenny Edwards. They recorded three albums together before Ronstadt set off on a solo career.

“Released in 1971, her self-titled third album Linda Ronstadt was a pivotal record in her career,” her official bio says. “Featuring a group of session musicians that would later become the Eagles, the album was a softer, more laidback variation of the country-rock she had been recording. With the inclusion of material from singer/songwriters like Jackson Browne, Neil Young and Eric Andersen, Linda became one of the premier interpreters of the new folk-rock idiom.”

Her 1974 album “Heart Like a Wheel” made her a star with the hits “You’re No Good,” “When Will I Be Loved” and “It Doesn’t Matter Anymore.” The album hit number one on the charts and sold more than two million copies.

She starred on Broadway in the musical Pirates of Penzance in 1981 and in the movie version in 1983. In 1986, she had a pop hit with singer James Ingram with “Somewhere Out There.” The next year she recorded a country album with Dolly Parton and Emmylou Harris. That same year, she recorded an album called “Canciones de mi Padre, a set of traditional Mexican songs from her childhood that paid homage to her Mexican roots. 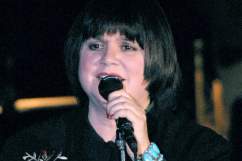 “The most important thing I can say about my music is that I learned everything I know from listening to songs in my living room between the time I was eight and 10,” Ronstadt told author T.J. McGrath. “If I didn’t hear it on the radio, or if my dad wasn’t playing it on the piano, or if my brother wasn’t playing it on the guitar or singing it in his boys’ choir, or my mother and sister weren’t practicing a Broadway tune or a Gilbert and Sullivan song, then I can’t do it today. It’s as simple as that. All of my influences and my authenticity are a direct result of the music played in that Tucson living room.”

Ronstadt recorded several other hit songs, including “Don’t Know Much” with Aaron Neville, “Blue Bayou,” “That’ll Be the Day,” and “Ooh Baby Baby.”

Ronstadt has never married and adopted two children, a boy and a girl, in the early 1990s. Her son Carlos works at Apple, according to the Los Angeles Times. Her daughter, Mary Clementine is an artist.

She lives in San Francisco. In 2013, she was diagnosed with progressive supranuclear palsy, a variant of Parkinson’s disease, according to The New York Times, and has since retired from her singing career.

In her memoir “Simple Dreams,” Ronstadt said she remains on good terms with Jerry Brown after dating in the 1970s, according to the Los Angeles Times.

She wrote that the couple “had a lot of fun for a number of years. He was smart and funny, not interested in drinking or drugs, and lived his life carefully, with a great deal of discipline.”

“Neither of us ever suffered under the delusion that we would like to share each other’s lives. I would have found his life too restrictive, and he would have found mine entirely chaotic,” she wrote. “Eventually we went our separate ways and embraced things that resonated with us as different individuals … We have always remained on excellent terms.”

In 1983, Ronstadt began dating director George Lucas, who created the “Star Wars” trilogy. They dated quietly for five years and got engaged, but never married. Ronstadt recorded her hit album “Canciones de Mi Padre” at Skywalker Ranch, according to the Daily Mail.

In a recent profile in The New York Times, Ronstadt said she identifies with her 1967 song “Different Drum,” which is about a woman who cannot be tamed by a man. 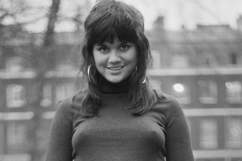 Linda Ronstadt Said She Agreed To Attend the Kennedy Center Honors Ceremony in Washington, D.C. Because President Donald Trump Would Not Be There

Linda Ronstadt, one of this year’s Kennedy Center Honorees, had sharp words for Secretary of State Mike Pompeo during a State Department reception https://t.co/PNXoNZsqfK

Linda Ronstadt said she agreed to attend the Kennedy Center Honors ceremony in Washington, D.C., because she was told that President Donald Trump would not be there, according to The New York Times. “I don’t think anybody would show up” if he was going, she said. The president historically attends the Kennedy Center Honors event, but Trump has not done so since he’s been in office.

At a State Department reception for the honorees this week, Secretary of State Mike Pompeo told the guests that “as I travel the world, I wonder when will I be loved,” referring to Ronstadt’s 1975 hit “When Will I Be Loved,” according to Variety magazine.

Ronstadt took the podium and said: “I’d like to say to Mr. Pompeo, who wonders when he’ll be loved, it’s when he stops enabling Donald Trump.”

In 2014, when President Barack Obama presented her with the National Medal of Arts, he admitted he had “a little crush on her back in the day.”

In the early 1980s, Ronstadt was one of many artists who were put on a United Nations blacklist for performing or appearing in South Africa in a cultural boycott of apartheid. According to the Chicago Tribune, she was paid $500,000 for six concerts in 1983. Ronstadt said she did not regret her decision.

“The last place for a boycott is in the arts,” she said. “I don’t like being told I can’t go somewhere.”

A new documentary “Linda Ronstadt: The Sound of My Voice” was released theatrically earlier this year and will air Jan. 1 on CNN.