Miss Universe Organization Salett Miguel, Miss Universe Angola 2019 competes on stage in her evening gown during the Miss Universe Preliminary Competition at the Marriott Marquis in Atlanta on Friday, December 6, 2019

Sunday night was the 2019 Miss Universe Pageant, and the show kicked off with the top 20 competitors.

Read on for the Top 20 Rundown.

Tunzi was born in Tsolo, and raised in the nearby village of Sidwadweni. Before winning Miss South Africa, she completed her Bachelor of Technology grad degree in public relations management at Cape Peninsula University of Technology. 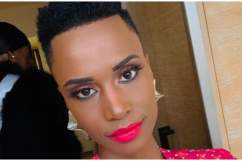 So excited for our schedule ahead and getting to know my Miss Universe sisters more! . . Outfit #2 from @windauia styled by the amazing @alvasus ?

Cull was born in Gold Coast, Australia. She completed her education in Australia before moving to Jakarta to work as a model.

Cull is the founder of Voice for the Voiceless, which raises the importance of birth registration.

Thuy shared a Vietnamese proverb when she took to the stage to advance to the final 20. She says as long as you work hard, your dreams will come true. Thuy competed in, and won, season 2 of Vietnam’s Next Top Model.

Dreams really do come true! Can't believe I'm only few hours away from competing at the 2019 @missuniverse preliminary competition. I have so many people to thank for getting me to experience this exact moment. I pray to make you all proud! And please don't wish me luck, wish me good favor in the eyes of the judges and the organization. I pray they see the motivated, ambitious, goal driven woman I am, now it's game time..let's rip the runway! Prelims start at 8pm EST make sure you tune in online.#naijatotheuniverse #MBGNuniverse #iamolutosin #confidentlybeautiful #missuniversenigeria #africatotheworld #roadtomissuniverse . . #iamolutosin #Godschild ##instabeauty #fashionblogger #blessed #instadaily #model #Influencer #africanqueen #melanin #likeforlike #Africa #Nigeria #gaintrick #gainpost #like4like #beautyqueen #likesforlikes #rfr #instabeauty #blessed #AfricanQueen #international #tosination

Araromi recommends Steve visit the conservation center if he ever visits Nigeria. The Nigerian-American competitor is a recent graduate of Montclair State University, where she studied human services with a concentration in health/family services and a minor in psychology.

According to her Instagram bio, Araromi also works as a presenter, public speaker, and humanitarian.

While preparing for Miss Universe, Drouin was taught the duck walk– which involves using more “hip swing”, because as an athlete she did not have enough hip swing in her model walk. The Thai-Canadian model is also a DJ.

According to Facebook, Paweensuda studied Kinesiology at the University of Calgary. She currently lives in Bangkok.

When she isn’t busy with pageants, Marina is an athlete for the USC Trojans women’s volleyball team and the Albania women’s national volleyball team. According to her USC Player’s bio, Marina is 5’11” and hails from Temecula, California. She was a transfer from Duke.

Maeva is the third Miss France winner from Nord-Pas-de-Calais within the span of four years. She has a twin sister. Maeva received her baccalauréat with a focus in management in 2013.

During Friday night’s preliminaries, Maeva was one of the competitors who fell while advancing to the podium.

In the beginning of the year, I didn’t even own a pair of heels and yesterday I walked in the @missuniverse preliminary along side my amazing #missuniverse2019 sisters. I think that proves that honestly anything is possible!

Birta was crowned Miss Universe Island 2019, and was born and raised in Mosfellsbær, just outside of Reykjavik.

When she isn’t busy training for pageants, Birta enjoys writing– she has already completed a full-length novel. She has also volunteered with the International Red Cross study aid program.

Mia studies engineering in Zagreb. She tells Steve that her biggest fear is falling down during the competition, but the other competitors have shown her that if she does fall, she has the strength to keep going. “Two days ago we saw our queens fall, but they stood up with a gorgeous smile, with the confidence they kept walking. They showed me and the whole world even when you fall you got to stand up and keep going,” she shared with Steve.

Sylva believes that humility, sympathy, and dedication are important qualities in both beauty pageants and daily life. She is 20-years-old.

Anderson hails from Phoenix, Arizona. Her father is American and her mother is Puerto Rican. After high school, Anderson studied fashion design at the Fashion Institute of Technology in New York City.

She has supported a number of causes over the course of her career, including helping women who have been released from prison. Madison also gives anti-bullying speeches at high schools. 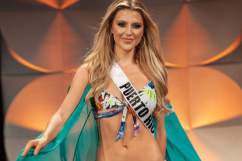 All of Kelin’s female family members have competed in international pageants and have encouraged her to follow her dreams. She says competing in Miss Universe is a dream come true. Her Instagram bio reveals she is a business manager and entrepreneur.

Aragon says Miss Universe is one of the most important platforms in the world. She was born in Guadalajara, Jalisco. 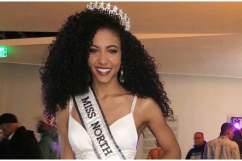 Ganados has five names. She is known for the work she does with the elderly and HIV/AIDS research.

Singh was ranked among the hottest women of India 2017. She received her Bachelor’s degree in nutrition and dietetics from Isabella Thoburn College. She also has her Master’s in Public health from the University of Lucknow.

During the preliminaries, Horta pulled out a flag that read, “Stop violence against women” while walking in her costume at the Miss Universe 2019 pageant.

Tafur is of Lebanese descent. She graduated from Colegio Bolivar in Cali, and went on to study law at the University of Los Andes. Tafur subsequently worked as a lawyer in the legal department of Microsoft Colombia.

Contestants from 90 countries and territories competed in this year’s pageant, hosted at Tyler Perry Studios in Atlanta, Georgia. The event was hosted by Steve Harvey, and featured a panel of seven women who decided on the top 20 semifinalists, who were narrowed down to the top ten, then top five, until one winner wa ultimately named.

Olivia Culpo and Vanessa Lachey served as this year’s backstage correspondents, and Ally Brooke performed live at the show. The competition kicked off with the results of Friday’s preliminary round. On Friday, the 90 contestants went through a closed-door interview and a preliminary competition that showed off swimsuit and evening gown wear.

Last year, Catriona Gray of the Philippines won the 2018 Miss Universe competition — she became the fourth contestant from the Philippines to win the competition. The 25-year-old spoke to ABS CBN about moving on into this next chapter in her life. She shared of tonight’s competition, “I am also a pageant fan aside from being Miss Universe, so I’m like secretly fangirling on the inside.” She continued, “It also is going to be a sentimental time for me, too because I’m passing on my title … But you know, I’m so excited to face my new chapter and I’m excited to see the girls shine.”

As for what’s next, Gray hinted at focusing her energy on music. “I do have a passion for music,” she said. “I also want to continue being a spokesperson and to work with the causes that are dear to my heart because it’s really what fulfills me as an individual … You’re definitely going to see me doing these things. Please continue to support me.”

This year’s pageant selection panel consisted of Gaby Espino, Sazan Hendrix, Riyo Mori, Cara Mund, Bozoma Saint John, Crystle Stewart, and Paulina Vega. In an interview with News Week, the organization shared, “This year’s contestants continue to raise the bar for what it means to be a Miss Universe. These women are diverse, ambitious and strong … We have pilots, engineers, lawyers and a firefighter in this year’s class of Miss Universe competitors. Airing live from Atlanta for the first time ever, this year’s pageant will allow the audience to learn more about the contestants than ever before, with four opportunities for contestants to speak during the live telecast.”

READ NEXT: Miss Universe 2019 Judges: Who Is on the All-Female Panel?