The Miss Universe pageant is unique among pageants in that it features a competition for each woman to “display an authentic costume of choice that best represents the culture of their home country.” Traditionally, contestants pull out all the stops to field some stunning creations for the national costume competition and 2019 was no different.

Here are some of the best ones, headlined by Miss Philippines Gazini Ganados, who was crowned the Best National Costume winner during Sunday’s pageant. 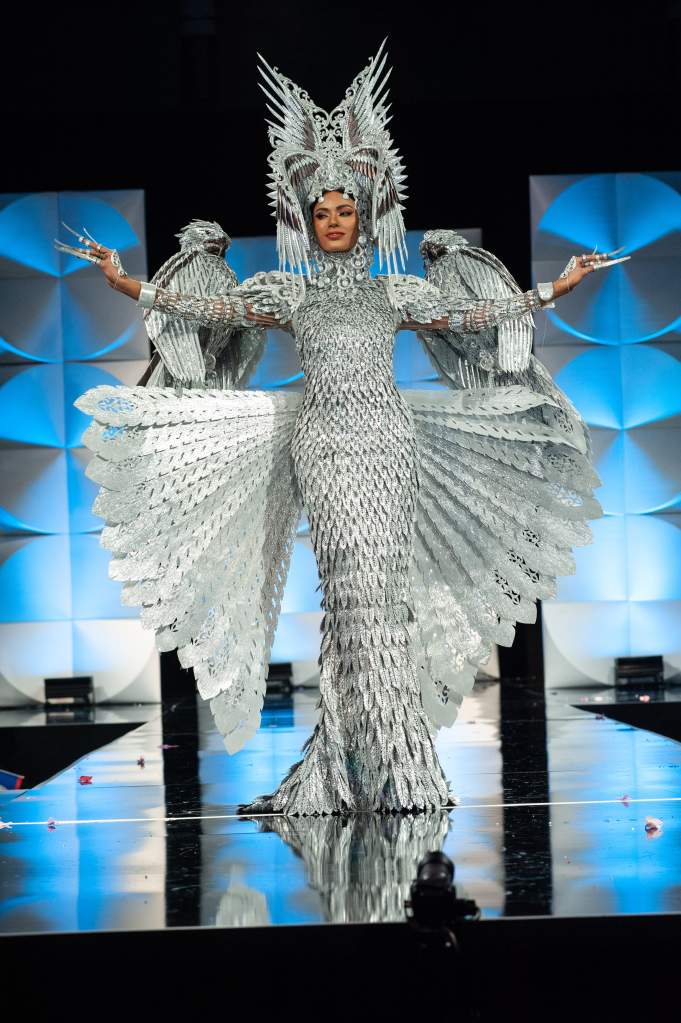 A photograph does not properly convey how involved Miss Philippines’ costume is. Designed by Cary Santiago, who writes on Facebook that he took his “inspiration from [the Philippines’] national bird,” which is the eagle. There are two enormous eagles sitting on each sleeve of the dress. “The design is not as flamboyant but the details are very intricate,” he says. “Its hand-stitched all coming from the same fabric with my signature laser-cut patterns.” Santiago also designed Ganados’ evening gown.

This larger-than-life costume represents Puerto Rico’s national flower, the flor de maga, which is closely related to the hibiscus except that the flor de maga grows much larger than the typical hibiscus, hence the large costume size. If you look closely, Madison is dressed like a tree frog sitting on the flower. Designer Joshuan Aponte writes on Instagram that the costume even used Bluetooth technology to feature the “coqui coqui” sounds of the tree frog. 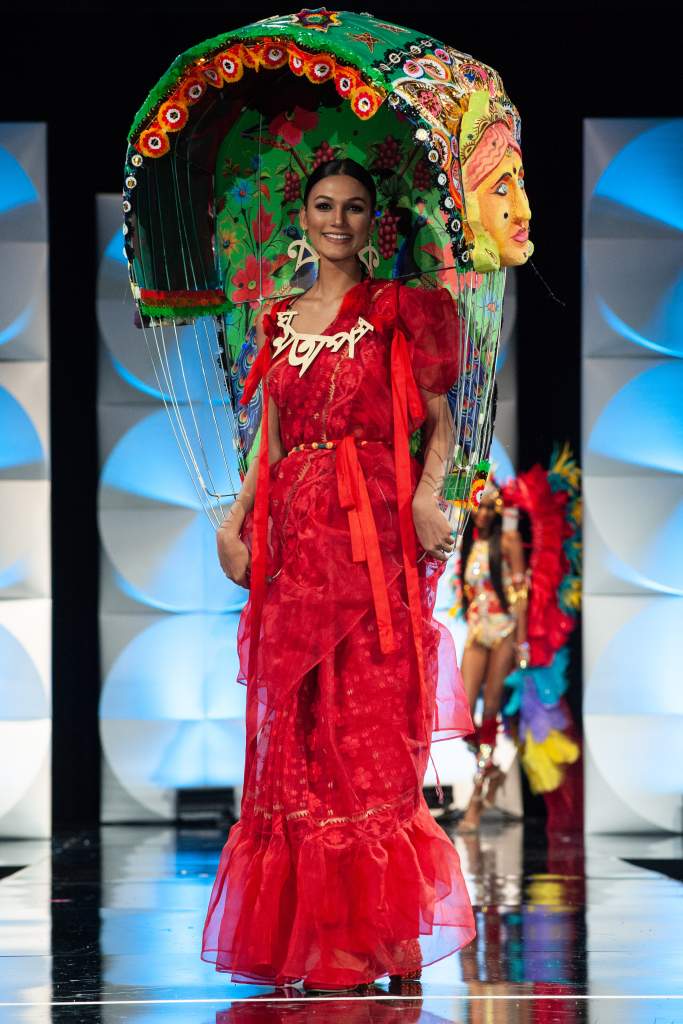 For Bangladesh’s first year being represented at the Miss Universe pageant, Shirin Akter wore a costume in the style of a rickshaw. She writes on Facebook, “The Bangladeshi costume for this year is a red Jamdani Sari, complete with a model hood of the iconic Bangladeshi Rickshaws, and jewelry made to imitate Bengali letters. Jamdani is a handloom woven fabric made of cotton, an age-old Bengali tradition that has been long celebrated across the world.

The Cambodian national costume is styled after Princess Indra Devi, the second wife of Emperor Jayavarman VII, according to Somnang’s Instagram. Devi was famous for her influence on affairs of state and was an active poet and a professor. Somnang writes on Instagram (translated from Khmer) that she hopes this costume conveys that “beauty, knowledge, talent, intelligence, responsibility, and confidence are all important, as it is hoped that Cambodian women will be brought to the forefront to make the country more familiar with Cambodia and its culture.”

This beautiful mosaic is inspired by the painted “carretas” (ox carts) in Costa Rica. As Fuentes writes on Instagram (translated from Spanish), “The typical Costa Rican cart is a Costa Rican cultural feature that consists of the handmade decoration of carts with different drawings of striking colors, each with unique designs that can be geometric figures, flowers, animals or landscapes. The typical cart is an element deeply rooted in the national identity of the country, it is a national symbol of Costa Rica and the tradition of painting it was declared Cultural Patrimony of Humanity by UNESCO.”

This colorful costume reflects the national agriculture of El Salvador, whose main crops include coffee, sugar, and corn, plus the national bird, the Torogoz.

This elaborate elephant costume that features several mechanical pieces not only represents the national animal of Laos but also makes a statement about fighting the fires that are destroying the Amazon rainforest, Vichitta reveals in an Instagram post.

Miss Malaysia took an unfortunate tumble during the preliminary swimsuit competition, but Shweta didn’t let that stop her from doing her best in the other competitions. Her national costume is one of the most intricate and detailed of the entire competition. It weighs over 60 lbs and features a table of traditional Malaysian food called kuih-muih, including onde-onde, kuih talam, red eggs, ang ku kuih and more. The costume is a piece of designer couture by Carven Ong titled “A Peranakan Indulgence.”

This brightly colored costume is inspired by the Phi Ta Khon Festival ghost festival held each summer in Loei’s Dan Sai district. Participants in the festival wear masks partially made from bamboo sticky rice baskets, which is what the costume represents.

Last but certainly not least we have Miss Ukraine wearing a stunning green ensemble that is meant to show “Ukraine the way the bird sees it from the height of its flight,” writes Subbota on Instagram (translated from Ukrainian). “The one we love and know: with its unique meadows, fertile land, forests, rivers, unique flora and fauna. The suit also has its own “green ideology”, which calls on all Ukrainians to remember that we must change ourselves and our habits every day, to protect nature, so that our descendants can see Ukraine as beautiful.”

Tune in Sunday (Dec. 8) at 7 p.m. ET/PT on FOX to find out who wins Best National Costume and also who takes the 2019 Miss Universe crown.