Sally Field has been a major film and television star for six decades. She is being honored by the Kennedy Center for her contributions to American culture, and as such, fans may be curious to comb through Field’s career, and look at photos of her when she was younger.

We’ve provided a gallery of photos from Field’s youth, dating back to the 1960s. Check out the photos, as well as a rundown of her career, below.

Field was born on November 4, 1946. She took up acting from an early age, and she made her screen debut as the titular surfer girl on the ABC sitcom Gidget. She was 19. The sitcom was not an initial success, but it established Field’s pedigree as an actress, and she parlayed the exposure into another classic sitcom, The Flying Nun. Field led the show from 1967 to 1970, during which time she became typecast as a Hollywood “good girl.”

“I started in situation-type comedies in the ’60s. I really had to claw my way out,” she told the Guardian in 2017. “Films didn’t want anything to do with television. They weren’t making any movies with anybody other than models. I was way too cute and perky. It wasn’t until the late ’70s that films started to get grittier and they were looking for a different kind of actor.”

Have the courage to keep reaching for your dreams. #sallyfield

“Even when I finally got into that door, made those transitions, as hard as they were, it still was incredibly difficult,” Field continued. “Even after various awards, it was very hard to find work worth doing. It isn’t that different today.”

Field’s big-screen breakthrough was Smokey and the Bandit, which became the second-highest grossing film of 1977 (behind Star Wars) and established her as a bankable star.

Sally Field photographed in the 70s.

Field followed Smokey with a string of critical and commercial successes. She won the Academy Award for Best Actress for her turn in Norma Rae (1978), and re-teamed with her Smokey co-star Burt Reynolds for Hooper (1978) and Smokey and the Bandit II (1980).

She earned a Golden Globe nomination for her turn in the courtroom drama Absence of Malice (1981), and won her second Academy Award for Places In the Heart (1984). Field said that getting older has ennobled her with wisdom that she didn’t have as a younger actress.

“I think in a lot of ways it’s my challenge to find what’s there for me that I don’t see right now,” she told NPR. “I know that I felt that in my 50s, I felt that in my 40s, that there’s something there that I can’t see yet and I can’t see until I’m there, but I won’t see if I’m not willing to let go of what I was and open up to what I will be.”

"Norma Rae is inspirational because it's the type of film where one person can be heard." #sallyfield #normarae

Field credits her age with adding texture to her performances. “I’ve gathered strength behind my years, I owned them, I’ve earned them, I’ve deserved them, I have a right to have them,” she explained. 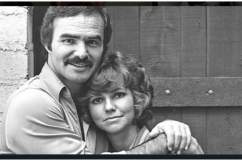