The Voice wraps up with a two-part finale on December 16 and 17. The final four contestants will perform before the judges and the live audience, but only one of them come out as the season 17 winner. Read on for a rundown of the finale air time and the schedule for the rest of the season.

‘The Voice’ Season 17 Finale Date & Time: The finale is being held on consecutive nights on Monday and Tuesday. Monday night’s episode will air live at 8 p.m. ET and last two hours, while the Tuesday night results show will air at 9 p.m. ET.

Something tells us @blakeshelton was more ready for this smooch than @johnlegend was. ? #TheVoice

‘The Voice’ Season 17 Finale Channel: The two-part finale will be aired on NBC. The network will also be providing a Live Countdown Show prior to the second part of the finale on December 17. The Countdown Show starts at 8 p.m. ET and will include interviews with the coaches and finalists.

‘The Voice’ Season 17 Finale Guest Performers: It’s become a Voice tradition to have a stellar roster of guest talent perform during the finale, and this season is no different. In addition to the performances by the quartet of finalists, the Tuesday night show will see a number of pop stars and take the stage.

The guest performers slated for the finale are Lady Antebellum, Jennifer Hudson, Dua Lipa and the Black Eyed Peas. There will also be an appearance from singer/songwriter Maelyn Jarmon, who won season 16.

‘The Voice’ Season 17 Finalists: There are four finalists heading into the season 17 finale:

Gold Derby reports that Hoot is the narrow favorite to win the competition over Kadan. Hoot has been a consistent performer all season long, and several of his covers have topped the Apple Music charts, which is a good indication of audience opinion. Hoot also has the vocal prowess and persona to cross over to a larger audience, so it would be no surprise to see him take home the title.

The other favorite to win season 17 is Katie Kadan. The boisterous singer has taken fans by storm since her audition, and she has continued to bring the goods with every performance. Kadan recently talked Meaww to about her song choices, and why she tries to challenge herself each time she steps out on to the stage.

“I keep on seeing iconic songs by iconic artists. It’s intimidating, but it’s so much fun. I hope I do everybody justice,” she explained. “I also got to sing a Lady Gaga tune, so I got to sing some more current stuff. I’d like to see myself doing something more current next time around too.” 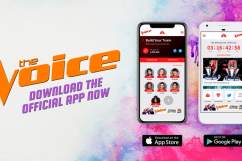 ‘The Voice’ 2019 Finale Voting: How to Vote for Season 17 Finalists

Read More
Reality TV, The Voice, TV
Find out what the schedule is for the remaining episodes of 'The Voice' season 17 and what times they will be released.