There are four finalists heading into the two-part finale of The Voice. They will each give a final performance, and the viewers at home will vote to decide which of them will be crowned the season 17 champion. Read on for a rundown of the finalists and what their chances are of winning.

The four finalists are: Ricky Duran (Team Blake), Katie Kadan (Team Legend), Jake Hoot (Team Kelly) and Rose Short (Team Gwen). The first three were voted in as the top three artists during last week’s show, while Short competed in the Instant Save Vote and sent two other contestants home.

There Are 4 Finalists Heading Into the Season 17 Finale

Kadan, 38, has been a fan favorite throughout the season, and she is predicted by many to win the competition. She’s given a bevy of strong performances (last week’s “Lady Marmalade” was a standout), and her coach John Legend has had nothing but kind words for her. “Everything she sings, she makes it sound like it’s her song. She makes it sound magnificent. She’s a superstar,” Legend gushed. “We’re fortunate that she’s even on our show. We don’t deserve you, Katie!”

Duran, 30, has been playing guitar since he was a child. He cites John Mayer and Paul McCartney as big musical influences, and he even covered the latter’s own “Let It Be” during last week’s performance. He told Parade that he’s been thankful for the exposure that The Voice has given him, and he has big plans for his career whether or not he wins the competition.

Katie Kadan & Jake Hoot Are the Favorites to Win the Competition

“I’m hoping to hit the ground running as soon as this is done. After Christmas, I’m going to get in the studio, probably release a single and plan a substantial tour, at least up the East Coast,” Duran revealed. “So, I’m just working on that. This is only the beginning, I hope, for my career in music and this just gives me such a big platform to work off.”

Short, 34, gave a devastating cover of “(You Make Me Feel Like a) Natural Woman” last week, and it couldn’t have come at a better time. Her soulful vocals and unshakable stage presence guaranteed her the Instant Save Vote, and we have every reason to believe she will make it count. Short, a former corrections officer, had to be convinced to audition by her friend and manager Taundra Shaw. “She didn’t want to do it. She tried to fight me and said, ‘No,'” Shaw told KCENTV.

Our eyes hurt from looking at this photo of two GLOWING ladies. ? #TheVoice #TeamGwen

Then there is Hoot, 31. The country balladeer has won fans over with his smooth vocals and easygoing stage presence, and is another favorite to come away with the competition. Hoot told Hollywood Life that his coach, Kelly Clarkson, has been a big part of his success thus far.

“Kelly encourages us to do our best and gives us all the confidence in the world. She gets us ready to perform and be our best selves,” he said. “She has been through all of this [on American Idol], and that provides a whole new look than what the other coaches can bring. She is so involved in every part of our performances — the songs, the look, the feel. She has helped me tremendously! She’s great because she’s lived our side of things, so it allows her to help us out in an amazing way.”

Only time will tell which finalist will come out on top as the season 17 winner. 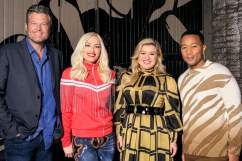 Read More
Reality TV, The Voice, TV
Find out which contestants are set to compete on the season 17 finale of 'The Voice.' Learn about them here.